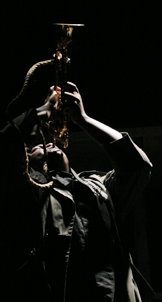 "Fences," a Pulitzer Prize-winning play by August Wilson set in 1950s Pittsburgh, is a portrait of garbage collector Troy Maxson and his family. Above, Gabriel Maxson (freshman Osei Kwakye), Troy's troubled brother, plays the trumpet in a pivotal scene. The student production will be staged March 2-4.

At left: All of the action in "Fences" takes place on and in front of Troy Maxson's porch. Pictured, from left, are his son Lyons (senior Jose Leonor); brother Gabriel; friend Jim Bono (sophomore Zennen Clifton); and wife Rose (sophomore L. Kelechi Ezie).

Two student theater groups are teaming up to produce August Wilson's Pulitzer Prize-winning play "Fences" in celebration of Black History Month. Performances are scheduled for 8 p.m. Thursday through Saturday, March 2-4, in the Hamilton-Murray Theater. A matinee performance is set for 2 p.m. March 4.

A joint production of Theatre Intime and the Black Arts Company: Drama, "Fences" is directed by sophomore Roger Q. Mason.

The play is a bittersweet tale of baseball, fate and family love set in the 1950s in Wilson's hometown of Pittsburgh. "Fences" is a portrait of garbage collector Troy Maxson and his family, with all of the play's action taking place on and in front of Maxson's porch.

Wilson, who died in October 2005, was renowned for his tales of the struggles of 20th-century African Americans. His other works included "Ma Rainey's Black Bottom," "Joe Turner's Come and Gone," "The Piano Lesson," "Two Trains Running," "Seven Guitars," "Jitney," "King Hedley II" and "Gem of the Ocean."

Tickets for "Fences" are $6 for students and children; $10 for faculty, staff and senior citizens; and $12 for general admission. They can be purchased online through University Ticketing or by calling the Frist Campus Center ticket office at (609) 258-1742. Tickets also will also be available for sale at the Hamilton-Murray Theater 45 minutes prior to each performance.

Theatre Intime is a student troupe whose beginnings trace to February 1920, when five Princeton students staged their first performance -- a parody of the Ballet Russe -- in a dorm room. Theatre Intime takes its name from the French word for "intimate," which best describes the 200-seat theater in which it performs.