Pearl Cleage's "Flyin' West," the story of African American women in search of freedom at the turn of the 20th century, will be presented by the Black Arts Company: Drama on Feb. 23-24 and March 1-3 at the Matthews Acting Studio, 185 Nassau St. Above, sophomore Chanel Coney (left) and freshman Mariam Martine Camara (right) play sisters Fannie Mae Dove and Minnie Dove, who have adopted a washerwoman named Sophie Washington (senior Heather Rae Martin, center) into their family. 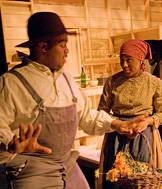 At left: From left, Minnie Dove and her husband Frank Charles (junior Robert Grant) gather with Fannie Mae Dove, Parish and Washington at her sisters' home.

The Black Arts Company: Drama troupe will present Pearl Cleage's "Flyin' West," a tale of four African American women in search of freedom, on Friday and Saturday, Feb. 23-24, and Thursday through Saturday, March 1-3.

Performances will be held at the Matthews Acting Studio, 185 Nassau St. Show times are 8 p.m. Thursdays and Fridays, and 3 p.m. and 8 p.m. Saturdays.

The play centers on the lives of four African American women who journey west to Kansas to seek the freedom promised them after slavery, only to be challenged by the rugged terrain, the social climate of the time and the men who claim to be with them for love.

"Cleage's 'Flyin’ West' is a vibrant, soul-stirring celebration of the resilience of womanhood at the turn of the 20th century," said Roger Q. Mason, a junior who is directing the performance and also serves as artistic director of the Black Arts Company: Drama.

Cleage is an Atlanta-based writer whose dozen plays also include "Blues for an Alabama Sky" and "Hospice and Bourbon at the Border." She also has written three novels, "What Looks Like Crazy on an Ordinary Day," "I Wish I Had a Red Dress" and "Some Things I Never Thought I'd Do."

Since its original production by director Kenny Leon at the Alliance Theatre in Atlanta in 1992, "Flyin' West" has been produced at numerous theaters in the United States, including the Kennedy Center for the Performing Arts in Washington, D.C., and around the world, including in England and South Africa. Leon will speak at Princeton on Monday, March 5. 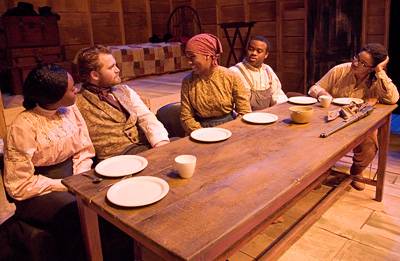 Tickets are $12 for general admission, $10 for faculty and staff, $8 for students and free for Passport to the Arts ticket holders. They can be purchased online through University Ticketing.

Founded in 1995, the Black Arts Company: Drama is a student theater group dedicated to celebrating and exploring the cultural experiences of people from the African Diaspora through performance.