Roger Q. Mason channeled his love for the theater into "Orange Woman, A Ballad for a Moor," a senior thesis production for the Program in Theater and Dance that will be performed April 4-5 and 10-12 in the Berlind Theater. To guide his script, Mason traveled to England last summer to study Elizabethan stage practices and learn more about that historical period. Photo: Denise Applewhite

At left: In the prologue of the play, a dance ritual introduces the audience to the characters who will force Lucy Morgan (sophomore Miriam Camara) on her journey to self-discovery. Lucy dances atop a bed, hoping to bring enjoyment and pleasure to her onlookers (clockwise from right), Queen Elizabeth I (sophomore Heather May), William Shakespeare (freshman Paul Bangiola) and brothel keeper Minnie O'Shea (junior Shannon Lee Clair), but cannot keep up with the rhythm of their demands.

Queen Elizabeth assumes the role of Lucy's adoptive mother. In this scene, she hosts a masque in honor of Lucy's 16th birthday, but things quickly go awry when Lucy begins flirting with Shakespeare, the affair's guest performer.     Below left: Lucy entrances Shakespeare with her birthday dance.     Production photos: Brian Wilson

Two years ago, in a class called "Beginning Studies in Acting," Roger Q. Mason found himself intrigued by lecturer Tim Vasen's description of a group of women who gathered at performances of William Shakespeare's plays.

"They sold exotic fruit to theatergoers -- specifically underclass men and women -- and they were called 'the orange women,'" said Mason, now a senior.

The image stuck with Mason when he thought about writing a play for his senior thesis that would imagine the lives that historical figures from Elizabethan times might have been leading behind closed doors. "Orange Woman, A Ballad for a Moor" tells the story of Lucy Negro, a historical figure whom some scholars believe was the inspiration for "the dark lady" in Shakespeare's sonnets. The play depicts the lead character as Lucy Morgan, a dancer for Queen Elizabeth who is ejected from the court and becomes Lucy Negro, a notorious brothel keeper. When she seeks to peddle oranges at Shakespeare's plays, she ends up providing poetic inspiration for his writings instead. 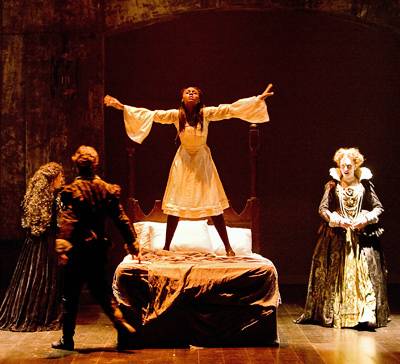 "Roger has an extraordinary imagination," said Robert Sandberg, a lecturer in the Department of English and the Program in Theater and Dance in the Lewis Center for the Arts. "His mind races with new images, new language, new moments that might enrich the world of the play." In "Orange Woman," Mason is "trying to balance historical reality with the fantasia he's writing, creating the characters of Lucy Negro, Shakespeare and Queen Elizabeth [as] combinations of our received notions and his unique inventions," Sandberg said.

Mason, who grew up in Los Angeles, arrived at Princeton with a love for the theater. An English major earning certificates in the Program in Theater and Dance and the Center for African American Studies, Mason has served as artistic director of the Black Arts Company: Drama and as an actor in the Princeton Shakespeare Company.

Participating in those extracurricular activities, as well as taking classes in playwriting, directing and producing, gave Mason an appreciation for all the elements that go into a theatrical production, he said. Last summer, to prepare for writing the play, he studied Elizabethan stage practices at the University of Oxford and visited London and Shakespeare's hometown of Stratford-upon-Avon to learn more about Elizabethan times. He also traveled to Dublin, Ireland, to conduct research about the background of one of the play's characters, brothel keeper Minnie O'Shea.

Next year, Mason hopes to work as an intern at a theater while applying to graduate programs in playwriting. 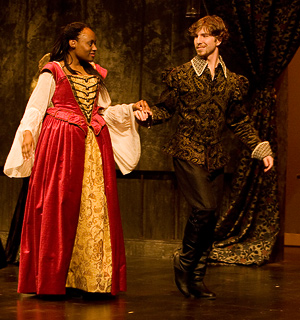 Writing the play and being able to see it staged at Berlind — with seven students in the acting roles, direction by McCarter Theatre Center guest director Kemati Porter and choreography by Dyane Harvey, a lecturer in theater and dance and the Lewis Center — has been a magical experience, Mason said. "The play is a blueprint, and they have used it to create something of their own," he said. "They have brought it to life in ways I couldn't have imagined."

For Mason, "Orange Woman" has fulfilled three passions: "my love of language, my curiosity about the storytelling mechanisms of the theater and my need to bring to life a story of Africans in the diaspora."

Tickets for "Orange Woman" are available through the University Ticketing website or by calling the McCarter Theatre Center box office at (609) 258-2787.

Stretching the boundaries of tragedy and comedy