Princeton professor Naomi Ehrich Leonard is part of a team conducting an unprecedented experiment with undersea robots that work together without humans to make marine observations. Here, she prepares the gliders for launch into Monterey Bay earlier this month. Photo: David Benet

Click here for a Flash animation depicting the choreography of the gliders.

Below left: The gliders move at a stately pace. "Sometimes the current is three times the rate of the speed of the glider, so it is a bit like a butterfly being tossed about in a windstorm," said Leonard's graduate student Derek Paley. This means that keeping each glider where it should be in relationship to all the other gliders is a real challenge.

This month in Monterey Bay, Calif., a fleet of undersea robots is for the first time working together without the aid of humans to make detailed and efficient observations of the ocean.

"It's thrilling," said Naomi Ehrich Leonard, professor of mechanical and aerospace engineering at Princeton and co-leader of the project. "The fact that six of these underwater gliders are being coordinated with humans completely out of the loop is unique." Leonard and co-leader Steven Ramp, of the Naval Postgraduate School, briefed members of media Wednesday, Aug. 23, at the Monterey Bay Aquarium Research Institute.

The oceanographic test site is yielding rich information about a periodic upwelling of cold water that occurs at this time of year near Point Año Nuevo, northwest of Monterey Bay. Upwelling events cause plankton to "bloom," providing a rich source of food for the fisheries and wildlife in the area.

But the project has potentially larger implications. It may lead to the development of robot fleets that forecast ocean conditions and better protect endangered marine animals, track oil spills and guide military operations at sea. Moreover, the mathematical system that allows the undersea robots to self-choreograph their movements in response to their environment might one day power other robotic teams that explore deserts, rain forests and even other planets.

"The work here is applicable to a wide range of problems," Leonard said.

In addition, the ability to coordinate autonomous vehicles -- a challenge inspired by the grace of bird flocks and fish schools -- may give biologists greater insight into the highly efficient behaviors of animals.

"I find this work extremely exciting from two perspectives," said Simon Levin, professor of ecology at Princeton who last year won the Kyoto Prize for his use of mathematical models to understand the complex patterns of the biosphere. "It offers potential payoffs in the efficient and effective gathering of information. But it could also give us a lot of insight into how animals organize themselves."

This month's experiment is unprecedented because so many robotic vehicles are autonomously coordinating themselves for such a long period of a time. While other researchers have created land-based robots that self-coordinate for short periods of time, these underwater robotic gliders are collecting data for a large-scale science experiment, self-choreographing in three-dimensions, and doing so over the course of an entire month.

Leonard has been working on the idea of biomimicry for at least a decade, and she and her associates have demonstrated in computer simulations and in short sea trials in 2003 that this self-choreography could be achieved. But this is the first time they have demonstrated it could work at the level of a full fleet with real robots at length. 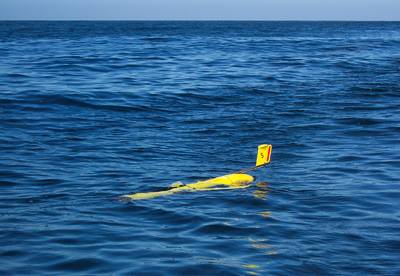 The experiment is the centerpiece of a five-year program known as Adaptive Sampling and Prediction, which is funded by the Office of Naval Research. Leonard's mathematical system regulates the six underwater gliders, each measuring about 6 feet long and weighing more than 100 pounds. It determines what paths the robots should follow to take the most information-rich samples, or measurements, of ocean activity. As the ocean changes, automated computer programs update the sampling strategy under the supervision of the team.

Most of the scientists have not been on site during the actual field experiment. Leonard herself has been in Princeton and New England during parts of the experiment. The team collaborates while the work is ongoing through teleconferences and through a virtual control room, something like a chat room for the scientists. The researchers gather in the virtual control room to share observations and make decisions about changes to the field operation as it is under way. Leonard's group includes graduate student Derek Paley and postdoctoral researchers Francois Lekien and Fumin Zhang.

In contrast to typical ocean-observing systems, which are static, the mobility of the gliders allows them to capture the dynamic nature of the ocean, which is always shifting in time and space. Furthermore, the gliders are coordinated into patterns to ensure that the measurements they take are as information-rich as possible.

In a recent interview with the magazine New Scientist, Gwyn Griffiths, who works on autonomous submarines at the National Oceanography Centre in the United Kingdom, described the project's ability to update ocean models so rapidly as "groundbreaking."

Inspired by the behavior of schools of fish, Leonard's group at Princeton has created mathematical procedures that allow the gliders to self-choreograph their movements in a series of rectangular patterns. The patterns span a large volume of water that the scientists have mapped just northwest of Monterey Bay (imagine a giant aquarium with porous walls that is 20 kilometers wide, 40 kilometers long and ranging from 50 to 1,800 meters deep).

The control algorithms allow the gliders to make day-to-day decisions about how to alter their course without any input from humans. This autonomy enables the gliders to stay in organized patterns even as they are buffeted by strong currents.

The gliders have no propellers, thrusters or any kind of external propulsion system. Instead, they are equipped with pumps that take in or eject water, which makes the gliders sink or rise. As they go down and up, the vehicles glide forward aided by fixed wings. They steer with a rudder or, in some cases, simply by shifting their batteries from one side to the other, which makes the glider bank. This streamlined design requires a minimum of battery power and allows the vehicles to remain at sea for weeks at a time.

These robots don't communicate directly with one another because underwater communication is not practical given the distances between the gliders. Each glider surfaces about every three hours in a staggered pattern (only one glider surfaces at a time). When a glider surfaces, it uses what is basically a cell phone modem connection, via satellite, to transmit its location to a computer either at the Woods Hole Oceanographic Institution in Massachusetts or the Scripps Institution of Oceanography in California.

A computer in Princeton grabs the glider's new coordinates and ocean current estimates through the Internet and then runs the software designed by Leonard and her researchers, called the Glider Coordinated Control System. The software acts as the gliders' collective brain. Without input from humans, the software estimates where all the other gliders are at that moment and spits out a new set of waypoints, or destinations, for the glider that has just called in.

Although the field experiment in Monterey wraps up this month, the project will continue through 2009. For the next couple of years, however, the research can largely be conducted through analysis, computer simulations and small-scale field experiments. "We have a whole virtual-control setup now, with integrated tools and collaborations already in place," Leonard said. "We will have a lot of opportunities to build on what we have accomplished."