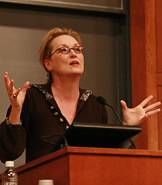 Academy Award-winning actress Meryl Streep told a crowd of 450 at Princeton on Nov. 30 that developing a capacity for empathy has given her the ability to "feel the exquisite living pleasure of transmitting (a character's) feelings to an audience. It's an actor's singular joy." Streep was invited to the University as the Belknap Visitor in the Humanities, a program that brings distinguished writers and artists to campus for one or two days to interact with students, faculty and members of the community.

"I'm here under false pretenses," actress Meryl Streep told a packed crowd at Princeton University on Nov. 30. "My achievement, if you can call it that, is that I've basically pretended to be extraordinary people my entire life, and now I'm being mistaken for one."

The Academy Award-winning actress was invited to Princeton as the Belknap Visitor in the Humanities, a program that brings distinguished writers and artists to campus for one or two days to interact with students, faculty and members of the community. The program was created in memory of Chauncey Belknap of the class of 1912, and the event was presented by Princeton's Council of the Humanities.

The subject of Streep's speech was the art of acting, though she told the audience of 450 students, faculty and others in McCosh 50 that acting is "an art that I find in its deepest essence to be completely mysterious." When it comes to understanding how she creates a character, Streep said, "I have been smug and willfully ignorant. I've cultivated a deliberate reluctance to investigate my own method of working because I'm afraid of killing the goose. I'm afraid if I parse it I won't be able to do it anymore." 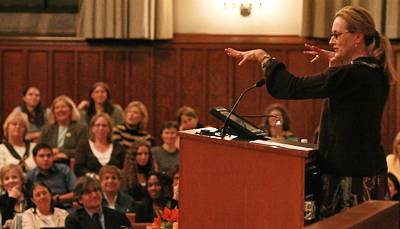 An actress of stage, film and television, Streep has appeared in such plays as William Shakespeare's "Measure for Measure" and Bertolt Brecht's "Mother Courage and Her Children," which was produced in New York's Central Park last summer. The 13-time Academy Award nominee also has appeared in more than 50 films, most recently "The Devil Wears Prada" and "A Prairie Home Companion," in addition to "The French Lieutenant's Woman," "The Hours," "Sophie's Choice" and "Kramer vs. Kramer." The two latter films earned Streep Oscars. She also has won two Emmys and a Lifetime Achievement Award from the American Film Institute.

Streep, who grew up in New Jersey's Somerset County and graduated from the Yale School of Drama, has had many great teachers, she said, but "the least valuable classes may have been in acting." Her three acting teachers at Yale had widely divergent approaches so, she said, "I decided to make it up as I went along."

The most valuable training for her acting career were classes in movement, singing and verse-speaking, she explained. Her dance class taught her something "so fundamentally useful I use it in every performance: That is the knowledge that the center of your strength is located somewhere slightly below the belt. It's the strength to hold the whole thing together. It's where your breath actually comes from," she said. She also learned that "music is the portal to the soul. ... Music is as necessary a catalyst to my inner work as is my memory," she said.

She recalled how she employed the skills imparted in her dance and music classes at Yale just this past summer when she appeared in Brecht's play in a role that was physically exhausting. "I'm 57 years old, and this summer I played Mother Courage outdoors in August in New York City, in a very energetic three-plus-hour production where I was very rarely offstage," she said. "I wore three skirts, two shirts, a jacket and a hat the whole night, it was rarely under 95 degrees, often stormy."

Streep said she feels a bit put off when people ask her why she has portrayed characters who are so different from her -- of different nationalities, different ages, even a different gender.

"And I say, 'Well, why did God invent imagination? Should I have played women from central New Jersey all my life?'" she said. "The people I have played in movies and in the theater have all felt like me to me."

Streep said she didn't have a "burning desire" to be an actress when she was young, but she can trace her interest in understanding how it feels to be someone else back to her childhood. She recalled a girl who lived down the block who was "relentlessly mean to me." When the girl would ban Streep from "the club," Streep would stand in the girl's front hallway and look at a framed needlepoint sampler that read, "You must not judge another man until you have walked a mile in his moccasins."

"This little piece of craft store kitsch was like an epiphany for me," Streep said.

She also recalled her mother surprising her with trips to New York City during her childhood, taking her to visit museums, see Broadway shows, eat all kinds of ethnic foods and watch the United Nations in session.

"Going to the United Nations opened up this door to an idea for me, an idea of peace and reconciliation among strangers who distrusted each other," she said. "And I think I've never really given that up or gone beyond that idea of being a translator, of explaining people to each other, of being a conduit of mutual emotional understanding. I'm only being a little grandiose when I say I think that's why I've always been drawn to characters who are difficult to translate to other people, prissy women, disagreeable women, women whose motives are easily misconstrued, women who are hard to love."

Developing that capacity for empathy, Streep said, has given her the ability to "feel the exquisite living pleasure of transmitting (a character's) feelings to an audience. It's an actor's singular joy."

Close seeks 'common point of humanity' in her roles