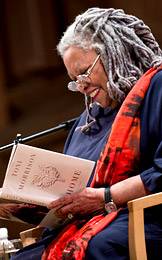 On Oct. 2, Nobel laureate Toni Morrison, the Robert F. Goheen Professor in the Humanities Emeritus, returned to Princeton, where she previously taught literature and writing for 17 years, as the Belknap Visitor in the Humanities. She read from her new novel, "Home," and answered questions from the audience.

Photo by Sameer A. Khan/
Fotobuddy 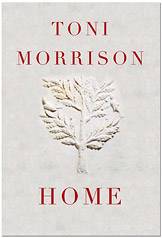 "Home" is Morrison's 10th novel. Published in May 2012, it tells the story of a young African American soldier returning home from the Korean War to the pre-civil rights South.

"Teaching is the second best thing to writing for me," Nobel laureate Toni Morrison told a packed audience at Princeton University on Oct. 2. "What a pleasure it is and how truly intellectually exciting it is to teach at Princeton," added Morrison, the Robert F. Goheen Professor in the Humanities Emeritus.

Morrison taught literature and writing at Princeton for 17 years until 2006. She returned as the Belknap Visitor in the Humanities, a program created in memory of Chauncey Belknap of the Class of 1912 to recognize distinguished individuals in the arts and letters. Morrison read from her new novel "Home," followed by a question-and-answer session with the audience of more than 550 students, faculty, staff and community members in Richardson Auditorium. The event was presented by the Council of the Humanities and the Center for African American Studies.

"As is the case every time Toni Morrison returns to Princeton, it promises to be a transformative event," Wallace Best, professor of religion and African American studies, said in his introduction.

Best described Morrison's literary development, starting with public schooling in her hometown of Lorain, Ohio, to earning degrees in English from Howard and Cornell universities, to working as an editor at Random House before coming to Princeton in 1989 to teach. As Best cited her winning the Pulitzer Prize in 1988, the Nobel Prize in Literature in 1993 and, most recently, in April, being named the recipient by President Barack Obama of the Presidential Medal of Freedom, the audience broke into enthusiastic applause.

"Toni Morrison has articulated the hopes, fears, triumph, paradoxes and expectations of the nation. She has moved us to see the tragedy and the consequences of human choices — of humanity itself," Best said. 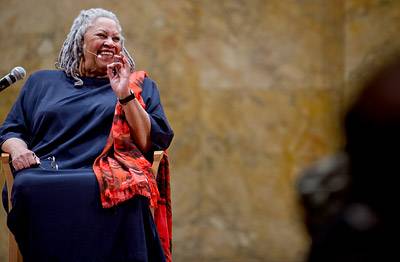 During the question-and-answer session, Morrison covered a wide range of topics — from her love of reading to the "farmers' hours" she keeps as a writer — and often showed her humorous side. (Photo by Sameer A. Khan/Fotobuddy)

Morrison settled into a chair center stage after receiving a standing ovation, and admitted that while "practicing" reading "Home" earlier in the afternoon, she couldn't decide which passage to read. "I have a lot of difficulty making choices so I thought, I'll start at the beginning and go," she said.

Opening the book, her 10th novel, on her lap, Morrison read aloud: "They rose up like men. We saw them. Like men they stood." This powerful image begins a childhood memory of horses — and lynching — relayed in the first person by the book's main character, Frank Money, a young African American soldier returning home from the Korean War to the pre-civil rights South.

Morrison concluded her reading with a scene in which the minister of an AME Zion church and his wife provide Frank with shelter in their home overnight, as well as money for a bus ticket and some food. At the bus station, Frank "turned to Reverend Locke and held out his hand. As the men shook hands they held each other's eyes, saying nothing and everything, as though 'good-bye' meant what it once did: God be with you."

An engaged audience followed the reading with a range of questions. The first came from a schoolchild, who asked: "How do you avoid writer's block?"

"I don't avoid it," Morrison said. "If something happens, and I can't do it, I respect the block. Many writers write through the block — and it shows."

A Princeton Theological Seminary student wanted to know if by mentioning the Zion church in "Home," was Morrison "putting a certain responsibility or onus on the black church to be a bearer of the burden for the community" or was she "showing the history of the black church and its activism?"

Morrison recalled a tour of historically black southern colleges she took as a member of a student theater troupe at Howard University in 1950. When their hotel accommodations sometimes were deemed an unsafe place for students to stay, the director would look in the Yellow Pages for a Zion or black church he recognized and call the minister, who would gather parishioners to host them. She recalled "amazing experiences" and "exceptional food" in these homes. "That's how I understand why African Americans say they love the South," Morrison said. 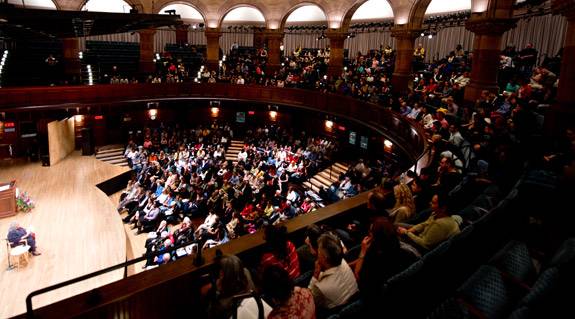 Morrison spoke in Richardson Auditorium before a packed audience of more than 550 students, faculty, staff and community members. (Photo by Sameer A. Khan/Fotobuddy)

Another audience member asked: "How has your teaching informed your work, your writing, or is it the other way, that the work has informed the teaching?"

Morrison said that her collection of essays, "Playing in the Dark," grew out of a course she taught at Princeton. "We read literature, and we talked about it. That was a real learning experience for me and for them [the students]. I had difficult questions, and they came up with the most extraordinary answers. That book is the consequence of learning and the exchange of ideas."

A third-grade teacher asked: "Looking back on your own childhood, how do you impart a lifelong love of reading and writing in children who may not be exposed to literature?"

"I don't remember my life before reading," Morrison said. "Reading was such a big deal in the family because it was illegal for black people to read, and if they did read, they could be arrested." She added that learning to read was "breaking the barrier. It had power."

Morrison also showed her sense of humor. When asked, "What inspires you in the morning to wake up and say, 'I'm writing something today,'" Morrison quipped, "I'm going back to bed."

She added that she "keeps farmers' hours," getting up before the sun and, if possible, writing until noon. "I'm very much driven by an idea," she said, noting that she is working on a new novel.

After the event, two Princeton freshmen said they wanted to see Morrison after each read one of her novels during their senior year in high school.

"Last year, we read 'Song of Solomon,'" Emily Reardon said. "I love to write, and I really want to minor in creative writing. It was an incredible experience to be able to hear her — just the images, her story."

Maggie Zhang read "Beloved" in her Advanced Placement English class. "It was the most amazing book I've ever read. As soon as I heard Toni Morrison was coming, I just wanted to hear her read. Her voice added so much more meaning to the work."

Donald Taylor, a junior, called Morrison "an amazing writer and person. It was really great to hear her not only read the book but to hear her share stories that were really powerful — about how it was illegal for her to read as a child. I thought it was amazing just to sit and listen to her speak."

During the event, the Center for African American Studies posted a live Twitter feed written by senior Mary Adeogun, who wrote, "Morrison reads her passages with such emotion ... the audience is once again moved to applause."

Before the final standing ovation of the occasion, Morrison articulated what it feels like to be caught up in the process of writing. "When I'm writing, all of a sudden everything looks useful — people, the sky, the dogs, whatever — it looks like it's serving the purpose," she said.