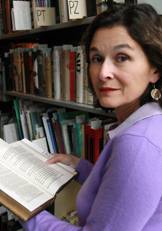 Esther Schor holds a first edition of Emma Lazarus’ “Songs of a Semite,” part of the Leonard Milberg ‘53 Collection of Jewish American Writers at Firestone Library, which includes first editions of all of Lazarus’ books as well as the work of 130 other writers. Schor used the collection to conduct research for her new biography (cover shown below left) titled “Emma Lazarus.”

With conquering limbs astride from land to land;

Here at our sea-washed, sunset gates shall stand

A mighty woman with a torch, whose flame

Is the imprisoned lightning, and her name

Mother of Exiles. From her beacon-hand

With silent lips. “Give me your tired, your poor,

The wretched refuse of your teeming shore.

Send these, the homeless, tempest-tost to me,

I lift my lamp beside the golden door!”

Many Americans don’t recognize Emma Lazarus’ name, but nearly all of them are familiar with her most famous piece of writing, penned in 1883:

“Give me your tired, your poor,
“Your huddled masses yearning to breathe free. …”

These words, from a sonnet engraved on a plaque inside the pedestal of the Statue of Liberty, have been immortalized in America’s consciousness. But who is the woman who wrote them? Esther Schor, a professor of English at Princeton and a poet, set out to answer that question in a new biography titled “Emma Lazarus,” published by Nextbook/Schocken.

Schor plumbed Lazarus’ letters, poems and other writings to create a portrait of a complex woman who defied the female roles of her time by pursuing a career as a poet and a critic and by speaking her mind on all kinds of hot-button issues. “She was a woman so far ahead of her time that we are still scrambling to catch up with her — a feminist, a Zionist and an internationally famous Jewish American writer before these categories even existed,” according to the book.

Born in 1849 to a wealthy Jewish family in New York City, Lazarus was a member of the city’s elite literary circles. She corresponded with Ralph Waldo Emerson and Henry James, wrote a weekly column for the American Hebrew, and penned plays, essays, translations and a novel. Her outspokenness on topics sensitive to many American Jews, such as anti-Semitism and the place of Jewish law in American Jewish lives, earned her harsh criticism from many parties, but she refused to be deterred.

“The New Colossus,” her most famous poem, was written to raise funds for a pedestal for the Statue of Liberty. But by 1886, when the statue was finally installed in New York Harbor and dedicated, the poem had been forgotten. Lazarus already was ill by 1886, and died a year later of Hodgkin’s disease. Lazarus’ words were finally given a place on the statue’s pedestal in 1903, where they have served as an anthem for America as a refuge for those who long for freedom. 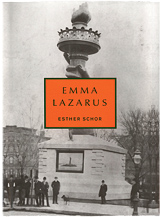 This book represents a bit of a departure for Schor, a Princeton faculty member since 1986 who specializes in British Romanticism. Her previous books include “Bearing the Dead: The British Culture of Mourning From the Enlightenment to Victoria,” “The Cambridge Companion to Mary Shelley” and a volume of poems, “The Hills of Holland.”

“I’m a literary critic, so it was a challenge to write a biographical narrative about a poet’s life,” Schor said. “I had to confine myself to discussing the poems only where they illuminated her life, which was not always easy for me.”

Schor recently discussed Lazarus’ most famous poem, her role as a pioneering woman and her championing of the Zionist cause.

Much was unknown about Lazarus until a trove of her letters was discovered by author Bette Roth Young in 1980 and published in a collection in 1995. Were you inspired to write about Lazarus by reading those letters?

Yes, I read her letters and they were amazing. First of all, she knew everybody in the 38 years that she lived. She met a lot of the major American literary and cultural figures, and she was very well connected, partly because of her wealth, partly because she was very good at picking up mentors. She was unashamed about writing fan letters and networking. The letters give us a person who is so vibrant and so smart and so unendingly curious about history, religion and literature.

Her gifts were many. She wrote dramatic monologues, plays and a novel on the life of Goethe. She wrote literary criticism and theater criticism, as well as some more philosophical and contemplative essays. She was a great reader of the literature of her day and she responded, sometimes in very surprising ways. She was also one of the pre-eminent translators of Heinrich Heine, the German Jewish poet. She was a poet and an activist. She saw writing as a kind of activism.

It was unusual at that time for a woman to be an accomplished writer and a public figure.

It was. She was taught to respect herself and her gifts from a young age. Her father published a book of her poems when she was 17. She respected herself and was respected, not only within the family but outside the family. And she certainly thought that women belonged in the public sphere. I’m not sure why she never married, but she had enough wealth to keep that from being a necessity. Her sister wrote a memoir about her the year after she died, which propounds a myth of her as very feminine and retiring. To my mind, that’s not what she was at all.

Tell me about the circumstances that led Lazarus to write the poem for which she is best known.

In 1881 and 1882, there was a period of bloody pogroms in many parts of Russia, and The New York Times published a series of articles that very graphically described the violence. This led to a refugee crisis in the United States, with refugees flooding into New York Harbor. Jewish organizations realized they needed to make some provisions for these people, and Lazarus was called on to make a visit to a temporary refuge built on Ward’s Island. It was an electrifying visit for her. She was sure she had a calling to help these people. She advocated for them in the press, she raised money, she gave money, she worked in an employment bureau trying to find them jobs.

It also resonated with her sense that the American people needed a new view of the Jew as a progressive individual who was part of the world, ready to work with hands and body as well as mind. The refugee crisis became a place for her to act out her ideas about how Jews should be perceived.

Lazarus wrote the poem in 1883 to be auctioned off at an art exhibition — a fundraiser to support building a pedestal for a new Statue of Liberty. Given by the French people, “Liberty Enlightening the World” was to be a monument both to Franco-American friendship and to the spirit of Enlightenment. But Lazarus’ sonnet transformed the statue into a beacon of generosity and welcome for all oppressed peoples.

As a piece of poetry, how do you evaluate “The New Colossus”?

I think it’s a fabulous sonnet, it’s brave and wonderful. In many ways it’s idealistic, but it’s also very iconoclastic. It breaks the icon of the imperial colossus first, and second it breaks the icon of the Enlightenment, the spreader of light. She speaks of the “imprisoned lightning” because, as she puts it elsewhere, “none of us is free until we are all free.” It’s an uplifting poem, yes, but not by endorsing lofty ideas of knowledge; on the contrary, it imagines the uplift of guidance, acceptance and refuge.

Lazarus was a pioneer in advocating for a Jewish state.

Yes, she wrote about the need for a Jewish homeland in Palestine in 1882, 15 years before the First Zionist Congress. She came to the position reluctantly. It was during a period when she was writing a column for the American Hebrew, and she was bitterly disappointed by factionalism among American Jews. She was getting criticism she hadn’t expected, and within a few weeks she went from declaring that Jews can always feel safe in the United States, France, Germany and England to declaring that there was a need for a Jewish state. The idea was so far out that virtually none of her obituaries mentioned it. But as Zionism gained momentum, Zionists revered her as a champion of their cause.

How did she establish herself as a Jewish writer when she was not particularly religious?

She had to improvise this public role as an American Jew and as a secular Jew. This was something that was not a given, and there were no fellow travelers for her. She had very strong convictions that Jewish law was not at the center of her Jewish identity. She was not an observer of Jewish law by and large. She called herself an outlaw Jew, but she believed strongly in establishing Jewish nationhood and working on behalf of the Jewish people to repair the world. She was a path-breaking American Jew and an American original.