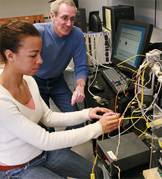 Senior Tamara Whitaker adjusts an experimental set-up under the watchful eye of Professor Jay Benziger. Whitaker is working with Benziger to overcome problems that arise in fuel cells when water droplets form in the systems. Benziger regularly forms research partnerships with students through Princeton's Research Experience for Undergraduates, which he has directed since launching it in 1996, and through collaborations as part of their junior and senior independent work.

All of the fuel cells developed in Jay Benziger’s lab run on hydrogen, but much of his research is powered by the chemical engineering professor’s collaborations with undergraduates.

Benziger is an expert in the design of fuel cells, which use hydrogen to make electricity with only water and heat as byproducts. Though these devices have attracted much attention as a clean alternative to fossil fuel-burning energy sources, there are many obstacles to their widespread use.

By combining his research activities with a strong interest in mentoring, Benziger is working to overcome these hurdles while providing his students with an opportunity to conduct and publish groundbreaking work. Most recently, he and Claire Woo, who graduated from Princeton in 2006, designed a simple and efficient way to vary the amount of power a fuel cell produces (see related story).

“Princeton is a place where the faculty like, and expect, to be involved with the undergraduate students,” Benziger said. “We don’t have faculty who just do research or just deal with graduate students. If I wanted to focus entirely on research, I’d be working in industry or a government lab.”

Benziger has directed Princeton’s Research Experience for Undergraduates (REU) since launching it in 1996. The program, funded by the National Science Foundation, is part of the Princeton Institute for the Science and Technology of Materials. Benziger often shares his authorship of published papers with undergraduates who have worked in his lab through the REU program or as part of their junior and senior independent work at Princeton. The research partnerships have resulted in publications in academic journals such as Science and the American Institute of Chemical Engineers Journal.

The benefits of this program extend beyond the confines of Benziger's lab. Over the last 11 years, more than 200 undergraduates from colleges and universities throughout the nation, including Princeton, have participated in Princeton’s REU program. Each year, about 20 faculty members from seven departments, including the engineering disciplines, physics and molecular biology, host students in their labs. The program draws many students from smaller colleges and universities that do not have strong research programs, including a special REU program started at Princeton last year for students from hurricane-devastated Dillard University of New Orleans.

Much of the program’s success is attributable to Benziger’s connection with students and skill as a mentor, said Dan Steinberg, director of outreach and education for the Princeton Institute for the Science and Technology of Materials. “Jay has a special ability to read students’ transcripts and place them in a lab where they will have success -- and that's not an easy task,” Steinberg said. “I've been in Jay’s office having a meeting and had a student from five years ago stop by because he was in the area and wanted to thank him for a wonderful experience.”

Benziger said collaborations with undergraduates are good for faculty members as well as students. “For the REU students, the program provides a great opportunity to see lab work outside the confines of well-defined, canned experiments and to see what is really important in research,” said Benziger, who also serves as the undergraduate representative for the chemical engineering department. “For the faculty, it gives them the opportunity to be more speculative in their research -- there isn’t a Ph.D. dissertation on the line.”

For Woo, who conducted fuel cell research with Benziger as an REU student and for her senior thesis, Benziger’s mentorship not only strengthened her research capabilities, but helped her design her future, she said in an e-mail message from the University of California-Berkeley, where she is now pursuing a Ph.D. in chemical engineering.

“It was a great experience,” she said, praising Benziger’s willingness to help her with hardcore research or difficult questions about her future. “He was always willing to listen.”

Benziger not only listens, but explains, said Thomas Brennan, a Princeton senior majoring in chemical engineering who was an REU student in Benziger’s lab the summer after his freshman year.

“In the spectrum of preparation for university research, I was certainly at the bottom end of things,” he said. “Yet Professor Benziger was very understanding of this and was able to phrase the research problem in a way understandable even without a chemical engineering education, and anticipated where I would have further questions.” Brennan’s REU experience led to a published paper on fuel cell technology and his plans to pursue a career in chemical engineering, specifically alternative energy research.

Benziger joined the Princeton faculty in 1979 after earning his undergraduate degree in mathematics at Carleton College and his Ph.D. in chemical engineering from Stanford University. In addition to fuel cells, he has long been a recognized expert in organic film deposition for electronic devices and the removal of sulfur from petroleum.

His regular duties involve advising students on their independent work and leading a required lab course for the chemical engineering department. Last fall Benziger also taught a course called “Engineering in the Real World: The Technology, the Markets and the Common Good,” focusing on engineering as a profession and the professional responsibilities of engineers.

Though the students move on, their research legacies remain -- providing ample fodder and inspiration for the next generation of fuel cell researchers in Benziger’s lab. Ask him a question about his work, and he’s likely to defer much of the credit, drawing a previously published paper from one of the tidy piles on his desk to illustrate an undergraduate’s insightful discovery. A nearby bookshelf overflows with senior theses from years past, regularly referred to by Benziger and his current research team, including graduate student Erin Kimball and senior Tamara Whitaker, as they build on the work of former students.

"Professor Benziger is a great instructor,” said Whitaker, who will work for IBM Global Business Services with clients in the energy and utility industries after her graduation. “His style allows me to take control of my independent research. He encourages collaboration with the graduate students in his research group and is easily accessible, so I also feel very supported.”

Benziger is quick to return the compliments of his students.

“Princeton undergraduates are very talented people,” Benziger said. “Once you get them started on something, they show great insight and can produce magnificent results.”