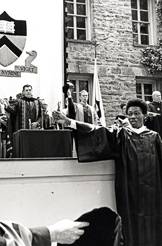 An exhibition beginning Feb. 19 at the Mudd Manuscript Library highlights more than two centuries of musical life on campus, focusing primarily on the development and evolution of student vocal and instrumental groups. Above, Clifford Dupree, president of the Glee Club, sings the University's anthem, "Old Nassau," at Commencement in 1972 while leading his fellow Princetonians in the song's accompanying "from the heart" salute.

At left: Predating even the University Orchestra, the Banjo Club (shown here in 1898) was among the earliest instrumental groups to form at Princeton. Along with the Mandolin Club, these small ensembles began performing at Glee Club concerts in 1884, and continued to play steadily until the 1930s. 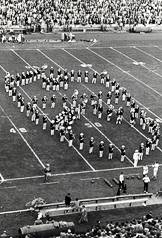 The University Marching Band forms the Princeton shield during a football game in the 1950s. The Mudd Library exhibition features early records from the Marching Band, the Tigerlilies, student jazz bands and groups formed by alumni returning for Reunions.     Below left: The Roaring Twenties a cappella group performs in a 1985 arch sing. Concerts held under the University's many arches are among the numerous forms of musical expression that students have created for themselves at Princeton.       Photos courtesy of the Princeton University Archives Historical Photograph Collection

A new exhibition, "Tune Every Harp and Every Voice," at the Mudd Manuscript Library draws upon the library's rich holdings to document more than two centuries of musical life on campus. On view from Feb. 19 until July 27, the display demonstrates that the history of music at Princeton bears witness to the changes of the University as a whole.

The exhibition focuses primarily on the development and evolution of student vocal and instrumental groups on campus such as the Glee Club; a cappella groups like the Nassoons; the University Band and Orchestra; and now-defunct groups like the Banjo Club. 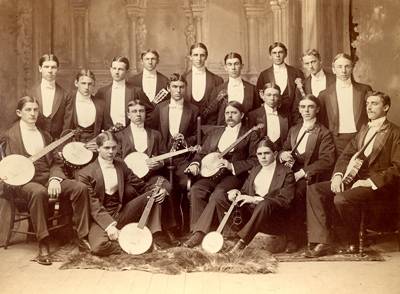 Even students who did not participate formally in any of these groups are still connected to generations of other Princeton alumni through a now canonized corpus of songs extolling Princeton. This exhibition displays important, notable and rare examples of Princeton songs that have long provided the soundtrack of campus life.

The centerpiece of the exhibition, and in many ways the lodestone of Princeton music, features a celebration of Princeton's most famous and most enduring song, "Old Nassau," which has been Princeton's anthem since 1859. Its words were written that year by Harlan Page Peck, a member of the class of 1862. When an effort to sing it to the tune of "Auld Lang Syne" proved unsuccessful, Karl Langlotz, who taught German at Princeton and directed a choral group, wrote the music for it.

Exhibition items taken from the University Archives at the Mudd Manuscript Library reflect the vast and varied holdings of the library itself. Among the rare items on display is Langlotz's personal violin upon which he composed "Old Nassau," along with examples of the variations in the song's lyrics that were prompted by the ever-changing face of the University population. The opening line of the song, originally "Tune every harp and every voice,'' became "Tune every heart and every voice'' around the mid-1880s.

Accompanying the violin is a wide sampling from the archives' sheet music collection of the variety of songs that have been written about Princeton, and song books used during senior step singing, a tradition in which the class gathers to sing songs that reflect on their campus experiences. Ephemera from concerts, including the tickets, programs and posters, give testament to the variety of musical expression that students found and were able to create for themselves at Princeton.

Drawn from the archives' audiovisual collection, albums on display include early records from the Marching Band, the Tigerlilies, student jazz bands and groups formed by alumni returning for Reunions. The recordings demonstrate the skill with which these groups were able to take advantage of new technology to make their music available far beyond the traditional campus boundaries. Musical events on campus have been well documented by campus photographers, and some images on display include group portraits from musical clubs dating back to the mid-19th century, ranging from the Marching Band in action to spontaneous musical concerts held under Princeton's many arches.

The exhibition also honors and reflects on the experiences of the classes of 1957 and 1982, which celebrate their 50th and 25th anniversaries, respectively, this June. A portion of the exhibition draws from a wide variety of photographic and documentary sources to recall notable events on campus during these classes' tenures. Among the events that are highlighted for the class of 1957 is a trip to "The Ed Sullivan Show" made by members of the 1956-57 Triangle Club; the retirement of President Harold Dodds; a campus visit by then-Sen. John F. Kennedy; and the controversy surrounding fiery campus chaplain Father Hugh Halton. Events documented for the class of 1982 include the long debated final report of the University's Committee on Undergraduate Residential Life; the visit of Queen Beatrix of the Netherlands; the football team's first victory over Yale in 15 years; and the campus debate sparked by an editorial in The Daily Princetonian commenting on race relations on campus.