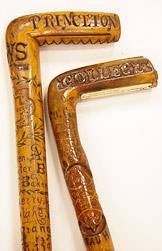 "'The Best Old Place of All': Treasures From the Princeton University Archives," an exhibition marking the 50th anniversary of the establishment of the University Archives, in on view at the Seeley G. Mudd Manuscript Library. The exhibition features historically significant documents and objects from the collection alongside seldom-seen treasures, including these ornately carved canes belonging to members of the classes of 1872 and 1873. (Photo: Denise Applewhite) 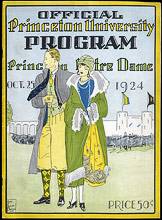 The fashions of the day are on display in this program from a Princeton vs. Notre Dame football game in 1924. (Image: Courtesy of Princeton University Archives) 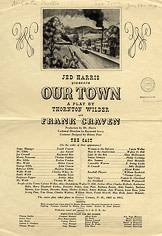 The world premiere of "Our Town," the classic play by Thornton Wilder, a 1926 graduate alumnus of Princeton, was held at McCarter Theatre in 1938. (Image: Courtesy of Princeton University Archives)

The exhibition coincides with the yearlong celebration of the 50th anniversary of the establishment of the University Archives and features some of the most historically significant documents and objects from the collection alongside seldom-seen treasures. It will run through Friday, Jan. 29. 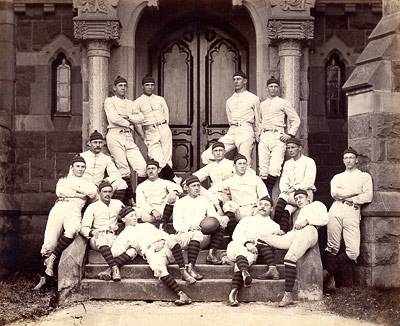 The exhibition includes examples of Princeton's storied athletic traditions, including this photo of the 1879 football team. (Photo: Courtesy of Princeton University Archives)

Featured in the exhibition are documents, photographs and objects from the University Archives covering the time of the institution's founding to the modern era. A page from the 1783 minutes of the Board of Trustees contains the trustees' request that George Washington sit for a portrait so that they might replace the work of King George that was destroyed in the Battle of Princeton. Nearby, a draft of then-University President Woodrow Wilson's vehement argument on the matter of the location of the Graduate College hints at another battle fought on campus more than a century later. 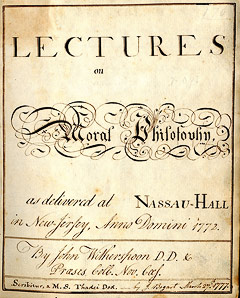 A set of notes transcribed from lectures on moral philosophy delivered by President John Witherspoon in Nassau Hall in 1772 is among the rare items on view in the exhibition. (Image: Courtesy of Princeton University Archives)

Many of the objects capture the ever-changing nature of student life and academics at Princeton. Early course examinations, class schedules and a set of handwritten student lecture notes from the time of John Witherspoon (who was University president from 1768 to 1794) exemplify how, though times may have changed, the purpose of the typical Princeton student has remained largely the same. One notable exception to that credo can be seen in the form of a so-called "cheating cuff," which hearkens back to the days before the Honor Code. Early 20th-century football programs and photographs from Triangle Club shows point to extracurricular pursuits.

In addition to paper documents and photographs, "'The Best Old Place of All'" draws upon the extensive memorabilia collection of the University Archives. Items such as canes, clay pipes and the Reunion jacket of Adlai Stevenson -- the influential politician and diplomat who graduated from Princeton in 1922 -- are all a part of the University's heritage. Other objects such as the discus that 1897 alumnus Robert Garrett threw in the 1896 Athens Olympics and a blackball box used during eating club "bicker" selections represent some of many curiosities that have found their way into the archives in the last 50 years.

"Whether it is an autograph book with Woodrow Wilson's inscription or a freshman 'dink' cap, all of this material contributes to understanding of what Princeton was and how it came to be,” said Linke. "While some things remain the same, the institution has undergone tremendous change, and where we are today is not what we will be in the days ahead." 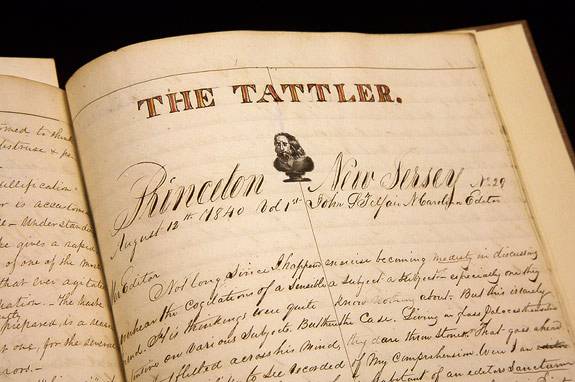 A copy of The Tattler, a handwritten newspaper from 1840, offers a glimpse at the changing nature of campus life at the University. (Photo: Denise Applewhite)

As a special feature of the exhibition, the 1748 charter of the College of New Jersey will be on view to the public May 29-30 and Oct. 10. The two-foot-wide parchment bearing the seal of the province of New Jersey is the founding document under which the University operates even today. Rarely taken out of climate-controlled storage, the charter is a magnificent piece of Princeton history, according to Linke.

The University Archives officially was established in October 1959 by President Robert F. Goheen to collect records created by University faculty, staff and students. These records document University administration, the development of academic departments and programs, as well as student life. Housed in the Seeley G. Mudd Manuscript Library since 1976, the University Archives consists of more than 15,000 linear feet of records and services more than 5,000 researchers each year. 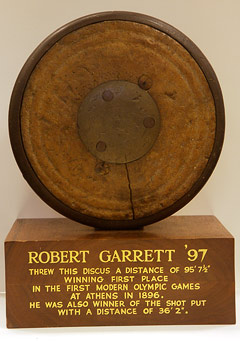 Robert Garrett, a member of Princeton's class of 1897, threw this discus to win the gold medal at the first modern Olympics in Athens in 1896. (Photo: Denise Applewhite)

Linke noted that the number of records and other materials collected by the University Archives -- from within Princeton as well as from alumni, families and outside donors -- continues to grow. He said the anniversary celebration is intended to raise further awareness about its role in preserving the University's history.

"We want to be part of the life of the University and document what goes on here," Linke said. "In the course of our day-to-day work, people sometimes don't think what they're doing is historical. But there are shelves of books showing that people are interested in what happens at Princeton University in all its aspects -- not only what the president's office or admission office is doing, but what's happening on the playing fields, what's happening in student life or how undergraduate life is changing." 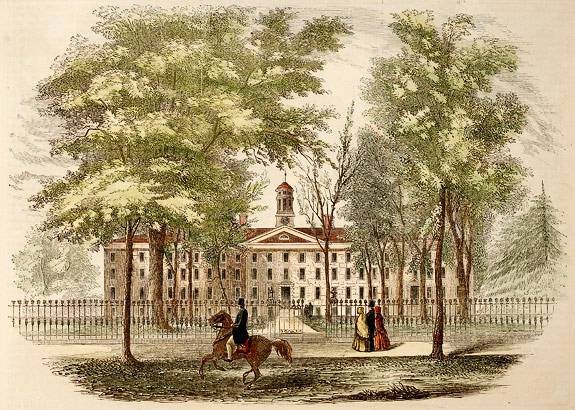 This image depicts Nassau Hall and the front campus of the then-College of New Jersey in 1853. (Image: Courtesy of Princeton University Archives)