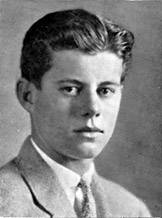 A new exhibition at the Seeley G. Mudd Manuscript Library showcases rare materials from John F. Kennedy's brief stint as a Princeton student in the fall of 1935. Kennedy's portrait appeared in the Princeton University class of 1939’s Freshman Herald. He withdrew for medical reasons in December of his freshman year.

Memorabilia from John F. Kennedy's brief stint as a Princeton student -- including his application stating his intended career as "banking" and a Christmas card showing Kennedy dressed in tails with his roommates -- is part of a new exhibition at the University's Seeley G. Mudd Manuscript Library.

Running through Friday, July 29, "John F. Kennedy: From Old Nassau to the New Frontier" showcases rare materials from the fall of 1935, when Kennedy entered the University as a member of the class of 1939, despite his father’s desire that he go to Harvard University. He left Princeton in December due to a gastrointestinal illness that put him in the hospital, and later transferred to Harvard, where he graduated with the class of 1940.

The exhibition also documents his presidential campaign and presidency, including rarely seen materials about the Bay of Pigs invasion, transcriptions of meetings held during the Cuban Missile Crisis, and photographs and documents from the Warren Commission’s investigation into Kennedy’s assassination. Some of the materials about his political career are from the papers of former Democratic presidential candidates Adlai Stevenson and George McGovern, which are housed in the library's public policy papers. All the objects in the exhibition are from Mudd Library's public policy collections and the University Archives. 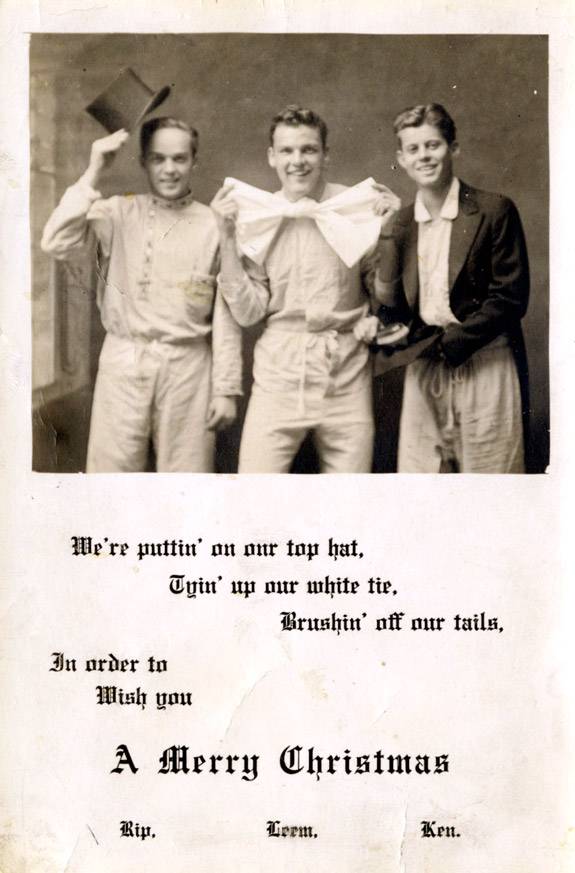 The exhibition includes a 1935 Christmas card from Kennedy (right) and his Princeton roommates. They wear top hats and tails in homage to Fred Astaire's film "Top Hat," which opened earlier that year. Kennedy's printed signature on the card is "Ken."

This presidential campaign brochure for Kennedy is part of the papers of Democratic presidential candidate Adlai Stevenson, which are held at Princeton's Mudd Library.

Materials from Kennedy's time at the University include his Princeton application, freshman year transcript and medical notes. Kennedy shared Room 9 South in Reunion Hall (a building that stood between Stanhope Hall and West College on the front campus, and was later demolished) with Kirk LeMoyne Billings and Rip Horton Jr., classmates from his high school days at the Choate School. The friends collaborated on a 1935 Christmas card in which they wear top hats and tails in homage to Fred Astaire's film "Top Hat," which opened earlier that year. Kennedy's printed signature on the card is "Ken."

The exhibition also chronicles the mixed feelings of Kennedy's classmates toward his political career. In the class' 25th reunion yearbook, several members said their 1960 presidential vote had been for "anyone but Kennedy," but a tribute to him and his connection to the class also was included in the book. In later years the class erected a memorial in Kennedy's honor at the 1939 Hall dormitory, which is part of the Wilson College residential complex. A small exhibition case in Mudd Library's lobby documents the class of 1939’s undergraduate and alumni activities through photographs and memorabilia.