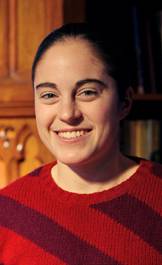 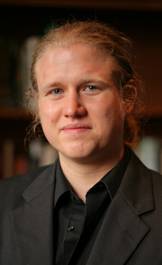 Princeton seniors Lillie Romeiser and Charles Staab have been awarded 2007 ReachOut 56 Fellowships, which provide the winners with a $25,000 grant to undertake a yearlong public service project after graduation.

Romeiser, who is from Lake Forest, Ill., will work with young people with developmental disabilities. Staab, who is from Ocean City, N.J., plans to bring music education to disadvantaged schoolchildren.

ReachOut 56 is an effort by Princeton's class of 1956 to help nonprofit organizations perform valuable public service. More than 100 members of the class have contributed funds to the program, which is involved with a number of other public service activities in addition to granting the fellowships. The first fellowships were awarded in 2002.

Candidates for the ReachOut 56 Fellowship find a public service organization that will create a position for them and work with that organization to devise a service project. Recent projects have included researching a book on arts and education programs in prisons; creating a youth education program to motivate teenagers to attend college; assisting Latino day laborers by organizing English classes and helping them understand their rights; and writing a "report card" on various aspects of Chicago's public school system.

"Since ReachOut 56 furnishes the funds to pay the fellow's living expenses during the year, we prefer to select organizations that wouldn't be able to afford the help otherwise," said James Freund, a member of the class of 1956 who oversees the fellowship process. "We consider this an excellent means by which our financial contribution serves a real purpose, through the energetic efforts of a talented public-spirited graduate."

Romeiser is majoring in religion and pursuing a certificate from the Program in Teacher Preparation with the goal of becoming an elementary school teacher. She will work with Anchored in Hope, which sponsors a summer camp called Camp Hope in the Chicago area for children, teenagers and young adults challenged with developmental disabilities.

Romeiser has worked with Camp Hope during previous summers, but now she will be able to take on more extensive responsibilities, including fundraising and grant writing, recruiting and training volunteers, scheduling programs and promoting the organization's overall goals. She will be on site during the weeks the summer camp is in session to oversee events and the buddy system, which connects a college or high school student with every camper for the length of his or her stay.

"Since I began spending time with people challenged by developmental disabilities during high school, I knew that I wanted to get involved with a program like Camp Hope over a long period of time," Romeiser said. "I'm excited to be able to grow closer to many of the campers personally and to expand the services offered to them throughout the year."

Romeiser is on the Princeton women's varsity basketball team and is active in Athletes in Action, an interdenominational Christian ministry that sponsors various public service programs. She has been a Mathey College peer adviser and participates in events with the Aquinas Institute, Princeton Pro-Life and the Student Volunteers Council.

For his ReachOut 56 project, Staab will work with MIMA Music to bring music instruction to disadvantaged students in after-school programs in Philadelphia. MIMA Music is a nonprofit organization founded by Christoph Geiseler, a member of Princeton's class of 2004.

Staab has volunteered with the organization for two years at programs in Trenton, Philadelphia, and Granada, Spain. He has developed a curriculum to tutor children and to help guide the college student volunteers he recruits.

A music major and jazz drummer who is working toward certificates in musical performance and French, Staab plans to pursue a career as a professional musician and hopes to continue to work with MIMA Music over the long term.

"I owe so much to music, and began my study in a public school music program," Staab said. "Now many children, especially in the inner-city, are not afforded that opportunity. Music education should not be a luxury only for those fortunate enough to afford it."

Staab is president of the Princeton University Jazz Ensembles and a singer with the a cappella group Free Form Vocal Collective.