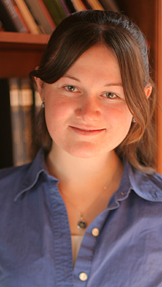 Princeton seniors Krista Brune and Derrick Raphael have been awarded 2006 ReachOut 56 Fellowships, which provide the winners with a $25,000 grant to undertake a yearlong public service project after graduation.

Brune, who is from Centennial, Colo., will conduct research for a book on arts and education programs in prisons. Raphael, who is from Fayetteville, N.C., plans to develop new programs to motivate disadvantaged teenagers to attend college.

ReachOut 56 is an effort by Princeton's class of 1956 to help nonprofit organizations perform valuable public service. More than 100 members of the class have contributed funds to the program, which is involved with a number of other public service activities in addition to granting the fellowships. The first fellowships were awarded in 2002.

Candidates for the ReachOut 56 Fellowships find a public service organization that will create a position for them and work with that organization to devise a service project. This year's candidates proposed a range of projects including: helping victims of sexual assault; teaching creative writing to inner-city and immigrant youth; promoting improved agricultural practices; and educating Native American high school students on ecological concerns.

Daniel Gardiner, a 1956 Princeton alumnus who chairs the ReachOut 56 initiative, said, "The two fellows we have selected, Krista Brune and Derrick Raphael, are outstanding seniors with fine records of achievement and public interest activity. They have devised significant projects for worthwhile organizations -- projects that could not be undertaken without our funding."

Brune is majoring in Spanish and Portuguese languages and cultures and pursuing a certificate in Latin American studies. She will work with Voices UnBroken, a Bronx-based nonprofit that helps New York correctional facilities and juvenile detention centers to provide inmates with resources for creative expression.

Brune plans to conduct research on arts and education programs in several states through interviews with directors, volunteers and inmates. Her goal is to write a book that records the history of these projects and analyzes the essential elements of successful programs.

"As a literature major, I have seen the power of words and creative expression. I am interested in learning more about how literature and creative expression have been used as healing tools within prisons and juvenile detention centers," Brune said. "While different individuals and groups have done this type of work across the country, the communication between these diverse projects has been lacking. I believe it would benefit nonprofit organizations and universities currently running arts programs in prisons and individuals interested in entering the field to have knowledge of what other groups are doing."

Brune's goals include earning a Ph.D. in Spanish and Portuguese cultures and running creative arts, writing and literature workshops in the prisons while working in a university setting.

Brune won the 2005 Premio Maria Zambrano award for best junior paper in the Spanish and Portuguese department. Her many extracurricular activities include serving as secretary for the Princeton Justice Project and leading its prison reform group. She also has been an Outdoor Action leader, a writer for several campus publications and a translator and tutor for campus and community organizations.

For his ReachOut 56 project, Raphael will work with the Educational Talent School (ETS) program at Fayetteville State University, which supported his efforts to apply to Princeton when he was in high school. The mission of ETS, which is funded by the U.S. Department of Education, is to identify and assist individuals from low-income and disadvantaged backgrounds who have the potential to succeed in higher education. It serves three relatively poor North Carolina counties that include students who would be the first generation in their family to attend college.

Raphael plans to undertake three initiatives for ETS: to establish leadership chapters at area schools; to help students to identify and obtain placement in summer internship positions; and to organize after-school discussions at numerous schools to provide information about the college placement process.

"Having the opportunity to give back as a ReachOut 56 fellow will allow me to gain a feeling of real accomplishment," he said. "Many people do not have the chance to really do what they want in life, and getting this chance right after graduating is like a dream.  I imagined being able to do something like this after graduating from high school, and getting the opportunity to do so is awesome."

Raphael, a sociology major, plans to obtain a Ph.D. in sociology and a law degree focusing on international law. Building on his ReachOut project, he intends to develop a nonprofit organization with a mission similar to ETS, seeking to strengthen connections between students around North Carolina by establishing chapters in most counties.

Raphael co-founded the Princeton Admission Links program, which works with the Office of Admission to organize student outreach initiatives. He also co-founded the Princeton University Pre-Law Society. Raphael is a board member of the Hallelujah Worship Committee, an Orange Key campus tour guide and an SAT tutor for local youths. He also was a residential adviser for the Freshman Scholars Institute, a summer preparatory program for incoming Princeton students, and has won numerous fellowships and grants for his academic work.