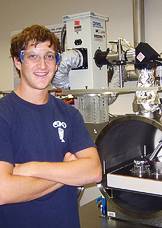 David Smith stands by the Mars Simulation Chamber, a device at the Kennedy Space Center used to reproduce the conditions present on the surface of Mars. Smith used the chamber for his senior thesis project, during which he investigated the ability of bacteria to survive on the red planet. His findings ultimately may help NASA plan better interplanetary missions.

Below left: Inside the Mars Simulation Chamber, Smith's bacteria faced temperatures of minus 12 degrees Celsius, a typical summer day at the red planet’s equator.

Quintessentially Princeton The senior thesis, an independent work that typically runs about 100 pages, gives seniors the opportunity to pursue original research and scholarship under the guidance of faculty advisers. In the recently re-issued guide, "The Thesis: Quintessentially Princeton" (.pdf 1.9 MB), Nathaniel Fintz joins several members of the class of 2006 in reflecting on their experience writing a senior thesis. "… the most wonderful aspect of the senior thesis is that it provides an opportunity not only to say something original, but also to blaze your own path into scholarly territory that may be largely unexplored or uncharted," he writes. "Seizing such an opportunity is perhaps the greatest way to approach your biggest undergraduate project, especially if you feel passionately curious about your topic, and if you have your adviser's good guidance along the way." The May 7, 2007, Princeton Weekly Bulletin profiles three students who have followed their passions into new realms for their senior thesis projects. Related articles: • Writing the melody of a novel • Testing gender differences in political behavior

David Smith always wondered whether other planets might harbor life, so when he actually got the opportunity to investigate, he jumped at it. His decision launched him on a year-long mission, leading him to the Kennedy Space Center and back.

Now, after long months exploring whether Earth bacteria can survive on the surface of Mars, he has returned with findings that could help NASA plan better missions to the red planet, and may even get his senior thesis published in a scientific journal.

"Philosophical questions concerning the origin of life on Earth and the possibility that it exists elsewhere in the universe have fascinated me since I read Carl Sagan's books as a boy," said Smith, who hopes his degree in ecology and evolutionary biology will help bring humanity some answers. "I wanted somehow to combine my interests in space and biology to explore these profound issues."

Smith's years at Princeton coincided with a class offering that perfectly fit his interests. In his sophomore year, Smith took the first-ever course Tullis Onstott organized with a few other professors on astrobiology, which concerns the possibility of life beyond Earth. The class inspired Smith and three of his classmates to form the Princeton Astrobiology Club, which last spring Onstott visited to search for someone to conduct the unusual research project he had in mind. 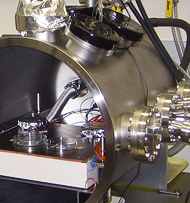 "One of my colleagues keeps a one-of-a-kind device called the Mars Simulation Chamber down at the Kennedy Space Center," said Onstott, a professor of geosciences. "The chamber recreates the cold, dry conditions that exist on Mars, and I thought it would be interesting to explore whether bacteria that thrive in cold places might be able to survive inside. David obviously wanted to find out too — his application was the best I received."

Onstott's colleague, Andrew Schuerger, has used the chamber primarily to test whether bacteria that hitch rides on space probes might invade the Martian environment, potentially contaminating an alien ecosystem and compromising the search for life beyond Earth. But Schuerger mostly has been concerned with warmth-loving bacteria that live in soils and spacecraft assembly workers, the source of most interplanetary hitchhikers.

"Everything I've done suggests that common skin bacteria would have a tough time on Mars, but David's proposal intrigued me," said Schuerger, a professor of plant pathology at the University of Florida. "He wanted to look at bacteria that were adapted to conditions as much like Mars as we can find on Earth, a question that I thought was the next logical step from my own research. He really impressed me with his preliminary work before coming to Kennedy."

Onstott said that if our planet's cold-adapted bacteria — known as psychrophiles — can survive in the inhospitable Martian environment, they could indicate how and where native Martian organisms might exist.

"Mars was once a wetter place where life could have evolved, and it might survive there now, perhaps deep underground," said Onstott, who recently discovered bacteria thriving two miles beneath the surface of our own planet. "The chamber might help us figure out where to look for Martian life."

After obtaining some psychrophiles from the Siberian tundra, Smith spent months in Princeton with Onstott's graduate student Mark Davidson breeding the organisms for additional toughness before taking them to Schuerger's chamber. Conditions inside were as balmy as they ever get on Mars: minus 12 Celsius, a typical summer day at the red planet's equator. But its rarefied atmosphere contains almost no water or ozone, and provides little protection from solar radiation.

"The Martian atmosphere is much thinner than Earth's, and the red planet's equator receives a punishing amount of ultraviolet rays," Smith said. "To simulate the sunlight, we shone high-intensity UV lamps onto the bacteria."

Against such harsh conditions, even a Siberian pedigree was insufficient; Smith found that just a few hours in the chamber was enough to doom the single-celled microbes. The specific reasons why they perished will remain confidential until Smith can publish them in a scientific journal, which — with the help of Onstott, Schuerger and a few other scientists — may happen in the next few months.

"In any case, I'm presenting the findings at the American Society for Microbiology conference in May," Smith said. "I haven't slept much lately putting it all together, but it's been a fantastic experience, and I couldn't have done it without a lot of people's help both here on campus and elsewhere."

Smith, who plans to pursue a graduate degree in astrobiology at the University of Washington in Seattle, first will take a year off to work again at the Kennedy Space Center.

"I have a whole new set of questions now," Smith said. "What if we put bacteria near the Martian poles, where there is frozen water? What if we put them inside or underneath a rock where there is some shade from the sun? And what other kinds of terrestrial life might have the capacity to grow on Mars? I can't wait to explore some of these other possibilities in the future."