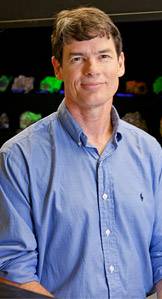 Onstott's research team, which he led with Gaetan Borgonie of the University of Ghent in Belgium, recently made a startling discovery: microscopic roundworms known as nematodes living nearly two-and-a-half miles beneath the Earth's surface in several South African gold mines. The worms are roughly a quarter of the diameter of the head of a pin. Although nematode species have been known to live as far as 20 feet below the surface, scientists generally assumed there was no reason to believe the organisms would be found anywhere near the depths of those found by Onstott's team, he noted. 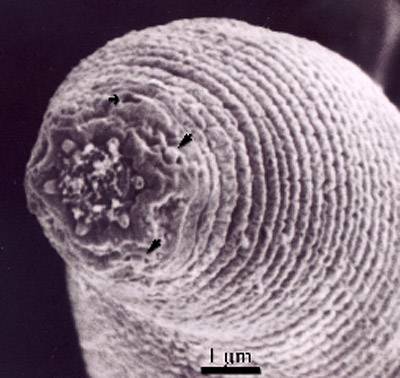 The species of nematode discovered by Onstott's research team can tolerate very high temperatures, reproduce asexually and feed on bacteria from the subsurface. It's a degree of unprecedented complexity that has prompted Onstott to say that finding these nematodes at such depths was akin to "finding Moby Dick in Lake Ontario." (Photo courtesy of Gaetan Borgonie)

The discovery, which was published in the June 2 issue of the journal Nature in an article titled "Nematoda From the Terrestrial Deep Subsurface of South Africa," has attracted the attention of national media outlets such as The Washington Post, National Geographic and Time. Moreover, it has raised questions about not only the possibility of even more complex organisms miles below the Earth's surface, but also the likelihood of life far into space. The project was supported by funding sources including the National Science Foundation.

"The potential to look for alien life on other planets exists, in a way, right here on Earth," said Onstott, a professor of geosciences who joined the Princeton faculty in 1985. "What we're looking for are 'extremophiles' deep within the Earth, living in an environment that could also occur on other planets."

This particular extremophile -- a word used to describe forms of microbial life found in habitats previously thought uninhabitable -- is remarkable not only for the depth at which it was found, but also for its biological complexity.

A wide range of single-celled organisms previously has been known to thrive as far down as these worms. It was thought, however, that the constraints of temperature, energy, oxygen and space would make it impossible for a multicellular organism to live in such a place. These half-millimeter-long worms can apparently tolerate very high temperatures, prompting the researchers to nickname them "worms from hell." The worms also reproduce asexually and feed on bacteria from the subsurface. Given their size, Onstott said that finding these nematodes at such depths was akin to "finding Moby Dick in Lake Ontario."

Immersed in explorations below the Earth

An explorer at heart, Onstott has been searching for this type of biological revelation ever since he was "bitten badly by the subsurface bug" as an associate professor of geosciences at Princeton in 1994. That year he was first introduced to the strange world of deep, subsurface bacteria, and less than two years later he found himself thoroughly immersed in microbiology, plunging far beneath the Earth's surface on what he likes to call "underground safaris." 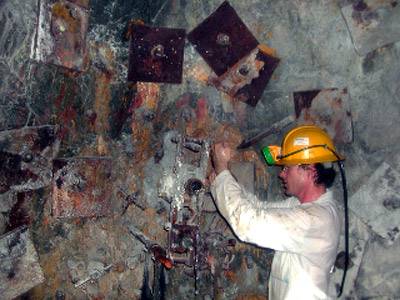 Enduring 90-plus degree temperatures, Onstott turns a valve while working at a depth of more than three kilometers in a South African gold mine where he found the subterranean roundworms. (Photo by Lisa Pratt)

It's ironic that Onstott developed such passion for the underground world, considering that since he was a boy growing up in New Mexico he only ever wanted to go into space. In high school, shortly after watching Apollo 8 launch from the Kennedy Space Center on television in 1968, Onstott read Carl Sagan's "Intelligent Life in the Universe." The book had a significant impact on him, and he was convinced he'd become an interstellar expert once he graduated.

While earning his bachelor's degree at the California Institute of Technology in the mid-1970s, however, Onstott's interests veered away from planetary science and toward geophysics. By the time he started working on his Ph.D. at Princeton, which he completed in 1980, Onstott no longer saw space -- or Mars in particular -- as a viable avenue of research.

"I was very much interested in traveling to other countries," Onstott recalled. "I couldn't very well travel to Mars, could I?"

However, what fueled Onstott's passion for the deepest of subsurface extremophiles was, more or less, the same question that fueled his fascination with space: He wanted to know how it's possible for life to exist in conditions so radically different from those on the surface of the Earth.

"Finding any life form in a strange place where normal people don't go and you would never expect to find it? That's always going to be something that appeals to the imagination," Onstott said. "It's almost science fiction in that regard. The search for life in these strange environments itself is something that broadens human perspective on life, and that's very important in helping us better understand how life evolves and how bizarre life can be."

The last 15 years of Onstott's subterranean explorations, research and study have taken him to myriad locales across the globe. Not only does he frequent the gold mines of South Africa -- where temperatures often approach 95 very humid degrees -- he has also taken several trips to the gold mines of Canada, where the warm air from the Earth's depths collides so quickly with sub-freezing surface temperatures that "snowflakes the size of chandeliers" form inside the mine, he said.

This, too, made Onstott think of Mars, where the conditions match those of the Canadian mines quite remarkably in certain spots.

"Everything is frozen on the Martian surface, but you go down a half-kilometer or so and things get warmer," said Onstott. "Also, you have caves on Mars where water might have risen through evaporation and frozen and crystalized. That's where you want to go looking for life on Mars." 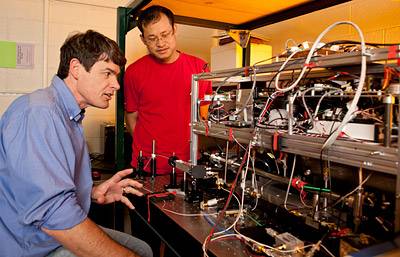 Onstott, working with postdoctoral research associate Yuheng Chen on a laser spectrometer used to examine methane found on Mars, has long been fascinated with the possibilities for life to exist in conditions radically different from those on the surface of the Earth. (Photo by Brian Wilson)

Even though he still remains interested in space, Onstott is particularly excited to see how the discovery of these "worms from hell" further informs scientists' understanding of this planet. For instance, Onstott wants to figure out what relationship these South African nematodes -- dubbed Halicephalobus mephisto in honor of the sinister, darkness-loving demon Mephistopheles of literary lore -- may have with subsurface radiation as a means of energy.

Onstott would also like to complete the gene sequence for H. mephisto and compare it to the genomes of closely related species found near the surface of the mines. This should give him a better sense of whether or not the nematode has adapted or evolved in the subsurface, and help him answer the pressing question of whether or not life can originate so far down, he said.

Questions like these are what compel Onstott to go even deeper, continually plunging himself ever further into the shrouded mysteries of the Earth's black, sweltering, sunless interior.

"We still don't know how far down the biosphere goes," Onstott said. "We have an expectation that it stops at a certain temperature, but we haven't found that particular boundary yet. And if we do, the next question becomes: What lies beyond that?"