The rod-shaped object near the bottom of the image is a bacterium Tullis Onstott's team found in water samples obtained nearly two miles underground in a South African gold mine. This type of bacterium, approximately four micrometers in length, has survived for millions of years on chemical food sources that derive from the radioactive decay of minerals in the surrounding rock, making it one of the few creatures known that does not depend on sunlight for nourishment. Photo by Tullis Onstott.

A Princeton-led research group has discovered an isolated community of bacteria nearly two miles underground that derives all of its energy from the decay of radioactive rocks rather than from sunlight. According to members of the team, the finding suggests life might exist in similarly extreme conditions even on other worlds.

The self-sustaining bacterial community, which thrives in nutrient-rich groundwater found near a South African gold mine, has been isolated from the Earth's surface for several million years. It represents the first group of microbes known to depend exclusively on geologically produced hydrogen and sulfur compounds for nourishment. The extreme conditions under which the bacteria live bear a resemblance to those of early Earth, potentially offering insights into the nature of organisms that lived long before our planet had an oxygen atmosphere.

The scientists, who hail from nine collaborating institutions, had to burrow 2.8 kilometers beneath our world's surface to find these unusual microbes, leading the scientists to their speculations that life could exist in similar circumstances elsewhere in the solar system.

"What really gets my juices flowing is the possibility of life below the surface of Mars," said Tullis Onstott, a Princeton University professor of geosciences and leader of the research team. "These bacteria have been cut off from the surface of the Earth for many millions of years, but have thrived in conditions most organisms would consider to be inhospitable to life. Could these bacterial communities sustain themselves no matter what happened on the surface? If so, it raises the possibility that organisms could survive even on planets whose surfaces have long since become lifeless."

Onstott's team published its results in the Oct. 20 issue of the journal Science. The research group includes first author Li-Hung Lin, who performed many of the analyses as a doctoral student at Princeton and then as a postdoctoral researcher at the Carnegie Institution.

"These bacteria are truly unique, in the purest sense of the word," said Lin, now at National Taiwan University. "We know how isolated the bacteria have been because analyses of the water that they live in showed that it's very old and hasn't been diluted by surface water. In addition, we found that the hydrocarbons in the environment did not come from living organisms, as is usual, and that the source of the hydrogen needed for their respiration comes from the decomposition of water by radioactive decay of uranium, thorium and potassium." 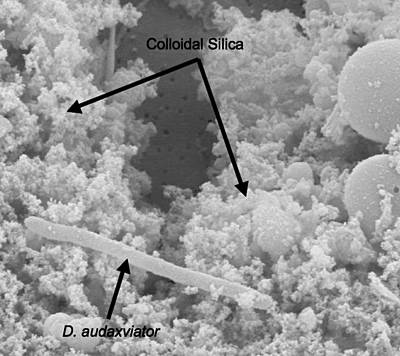 Because the groundwater the team sampled to find the bacteria comes from several different sources, it remains difficult to determine specifically how long the bacteria have been isolated. The team estimates the time frame to be somewhere between three and 25 million years, implying that living things are even more adaptable than once thought.

"We know surprisingly little about the origin, evolution and limits for life on Earth," said biogeochemist Lisa Pratt, who led Indiana University Bloomington's contribution to the project. "Scientists are just beginning to study the diverse organisms living in the deepest parts of the ocean, and the rocky crust on Earth is virtually unexplored at depths more than half a kilometer below the surface. The organisms we describe in this paper live in a completely different world than the one we know at the surface."

That subterranean world, Onstott said, is a lightless pool of hot, pressurized salt water that stinks of sulfur and noxious gases humans would find unbreathable. But the newly discovered bacteria, which are distantly related to the Firmicutes division of microbes that exist near undersea hydrothermal vents, flourish there.

"The radiation allows for the production of lots of sulfur compounds that these bacteria can use as a high-energy source of food," Onstott said. "For them, it's like eating potato chips."

But the arrival of the research team brought one substance into the underground world that, though vital to human survival, proved fatal to the microbes -- air from the surface.

"These critters seems to have a real problem with being exposed to oxygen," Onstott said. "We can't seem to keep them alive after we sample them. But because this environment is so much like the early Earth, it gives us a handle on what kind of creatures might have existed before we had an oxygen atmosphere."

Onstott said that many hundreds of millions of years ago, some of the first bacteria on the planet may have thrived in similar conditions, and that the newly discovered microbes could shed light on research into the origins of life on Earth.

"These bacteria are probably close to the base of the tree for the bacterial domain of life," he said. "They might be genealogically quite ancient. To find out, we will need to compare them to other organisms such as Firmicutes and other such heat-loving creatures from deep sea vents or hot springs."

The research team is building a small laboratory 3.8 kilometers beneath the surface in the Witwatersrand region of South Africa to conduct further study of the newly discovered ecosystem, said Onstott, who hopes the findings will be of use when future space probes are sent to seek life on other planets.

"A big question for me is, how do these creatures sustain themselves?" Onstott said. "Has this one strain of bacteria evolved to possess all the characteristics it needs to survive on its own, or are they working with other species of bacteria? I'm sure they will have more surprises for us, and they may show us one day how and where to look for microbes elsewhere."

Pratt and Onstott have collaborated for years as part of the Indiana-Princeton-Tennessee Astrobiology Institute (IPTAI), a NASA-funded research center focused on designing instruments and probes for life detection in rocks and deep groundwater on Earth during planning for subsurface exploration of Mars. IPTAI's recommendations to NASA will draw on findings discussed in the Science report.

More information about the discovery can be found at http://newsinfo.iu.edu/news/page/normal/4229.html and http://www.carnegieinstitution.org/news_releases/news_2006_1019.html

Geochemical, microbiological, and molecular analyses of alkaline saline groundwater at 2.8 kilometers depth in Archaean metabasalt revealed a microbial biome dominated by a single phylotype affiliated with thermophilic sulfate reducers belonging to Firmicutes. These sulfate reducers were sustained by geologically produced sulfate and hydrogen at concentrations sufficient to maintain activities for millions of years with no apparent reliance on photosynthetically derived substrates.