Writing the melody of a novel 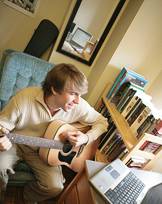 Scott Elmegreen, a music major who also is earning a certificate in creative writing, wrote two senior theses this year, both combining the written word and music. He spent much of his time composing on his guitar in front of his laptop. Photo: Denise Applewhite

In Elmegreen's novel "Reveille," written as his thesis project, the thoughts and emotions of the main character, a musician named Spencer, and others sometimes emerge as musical notes rather than words. In this passage Spencer is talking to his ex-girlfriend, Adie, for the first time in more than a year. Hearing her voice brings back a powerful feeling of nostalgia, represented here as music.

Quintessentially Princeton The senior thesis, an independent work that typically runs about 100 pages, gives seniors the opportunity to pursue original research and scholarship under the guidance of faculty advisers. In the recently re-issued guide, "The Thesis: Quintessentially Princeton" (.pdf 1.9 MB), Nathaniel Fintz joins several members of the class of 2006 in reflecting on their experience writing a senior thesis. "… the most wonderful aspect of the senior thesis is that it provides an opportunity not only to say something original, but also to blaze your own path into scholarly territory that may be largely unexplored or uncharted," he writes. "Seizing such an opportunity is perhaps the greatest way to approach your biggest undergraduate project, especially if you feel passionately curious about your topic, and if you have your adviser's good guidance along the way." The May 7, 2007, Princeton Weekly Bulletin profiles three students who have followed their passions into new realms for their senior thesis projects. Related articles: • Seeking Mars survival secrets • Testing gender differences in political behavior

A few weeks ago Dmitri Tymoczko, the departmental representative in music, sent out an e-mail that listed the name of every senior in the department and the type of thesis each student was pursuing. Some students were listed under musicology, and some under composition. Scott Elmegreen was listed under "other."

Elmegreen, a music major who also is earning a certificate in creative writing, actually wrote two theses, both of which combine the written word and music in a way that's rarely been done. For his music thesis, he composed 12 songs that accompany a short story, plus an academic paper that explores the way music and text can interact. For his creative writing thesis, he wrote a novel in which the thoughts and emotions of the main character, a musician named Spencer, and others sometimes emerge as musical notes rather than words, so that more than 30 pages of the novel are actually a written score.

"I wanted to explore the ways in which music could complement a story as it is told through the written word," Elmegreen said. For the narrator, "there are several points where words fail and his emotions are best expressed through music."

Elmegreen, who grew up in Westchester, N.Y., has always loved music — he plays the piano, guitar and saxophone — and his musical ambitions have focused on composing. He has been a writer and composer for the Triangle Club since his freshman year. Last year he co-wrote "College: The Musical," which was performed on campus by Theatre Intime and was given a reading earlier this month at the Princeton Club of New York with Broadway actors and the musical director of the Broadway show "Avenue Q" participating.

At Princeton Elmegreen studied writing with professors Edmund White, Chang-rae Lee, Joyce Carol Oates and Gabe Hudson in pursuit of his other ambition: to write a novel.

"Reveille" is a 225-page novel about two friends — Spencer, the musician, and Isaac, a filmmaker — who are struggling to succeed as artists in New York City. Working on the novel for the last year, with Oates as his adviser, was an arduous but rewarding undertaking, Elmegreen said. "I probably wrote 1,000 to 2,000 pages," most of which he ended up discarding, he said.

Oates said Elmegreen and Josh Williams, the other senior whom she is advising, are "such imaginative and energetic young writers."

Elmegreen undertook the novel with no idea whether interspersing a musical score in a narrative would succeed. "For all I knew there was a reason no one ever did this before — it wouldn't work," he said.

Paul Lansky, the William Shubael Conant Professor of Music and Elmegreen's adviser, said, "Scott has confronted what is really an unknown task, to compose the soundtrack of silent reading, and he has had to face some very interesting and unusual problems. He also took the added leap of composing music for his novel in which the music represents the substance of the work in nonverbal terms — the inner voice of the novel, as it were."

In order to help readers appreciate the music in the novel, Elmegreen constrained himself to writing for piano and guitar — the instruments with which readers are most likely to be familiar — and kept the music spare and simple.

In the 12 songs he wrote to accompany his short story, Elmegreen wrote "incomplete music that could not stand up on its own," so that the reader would not be distracted from the words. Elmegreen recorded the music as sound files that play as the reader reads an electronic version of the text (which contains adult themes and some suggestive language).

After graduating, Elmegreen will move to New York City, where he will be a Princeton Project 55 Fellow at the Jeannette Watson Fellowship Program, mentoring college students who have been awarded summer internships. He also will be working on revisions to "Reveille" in the hope of getting it published.