Mixing it up: Rankin uses range of methods to pique interest in German 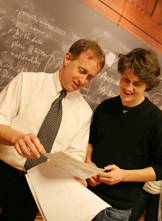 Jamie Rankin, the coordinator of language teaching and pedagogy in the German department, consults a map of Munich with one of the students in his "Intensive Intermediate German" class. In addition to teaching such courses, Rankin has explored many other ways to immerse students in German language and culture, from creating the Princeton-in-Munich program to preparing German feasts in his home.

Above left: Elaborate desserts are one of the highlights of the dinners Rankin plans in his home for students.

At left: Rankin (standing at table) enjoys spending time with students in casual settings because it “keeps me in touch with what they’re talking about and helps me develop material for class that will interest them,” he said. He cooked dinner for a group of students at his home this spring.

Below left: Rankin (left) reviews grammar with students in his “Intensive Intermediate German” class, a double-credit course that meets five days a week. “It is a testament to his vigor and love of teaching that, despite the class’ scheduled ‘kick-off’ at 8:30 each morning, very few students are late and almost none are absent, day-in, day-out,” said sophomore Chris Schlegel.

Bottom left: In addition to cooking for students, Rankin spends time with them outside the classroom arranging music for the Nassoons a cappella group, accompanying student recitals on the piano and working with the music team of the Princeton Evangelical Fellowship.

Jamie Rankin, the coordinator of language teaching and pedagogy in the German department, takes a variety of pathways to immerse students in German language and culture.

He teaches intensive language classes that cram a year's worth of the language into one semester; he accompanies students on study programs in Munich; and he offers demanding classes for graduate students that explore the theoretical aspects of second-language acquisition.

But Rankin also uses some less formal approaches. He runs marathons with students, prepares German feasts at his home and eats dinner on Wednesday nights at Mathey College.

Spending time with students in casual settings "keeps me in touch with what they're talking about and helps me develop material for class that will interest them," Rankin said. 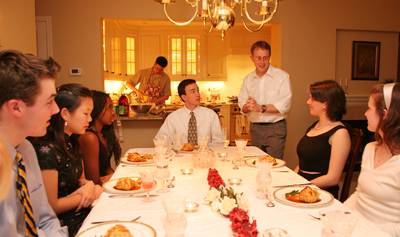 Rankin was a music major at Wheaton College, where he received his bachelor's degree, but went on to earn a Ph.D. in 19th-century German fiction from Harvard University. "I knew even at that point — in graduate school — that what I wanted to do was language acquisition," Rankin said. After several years teaching German at Binghamton University, Rankin spent a year at the University of Hawaii-Manoa doing postdoctoral work in second-language acquisition and foreign language pedagogy. He arrived at Princeton in 1991 and soon set out to improve the pedagogy seminar for graduate student assistant instructors in the department.

"I wanted to make it more rigorous and to incorporate the academic side of second-language acquisition with classroom experience," said Rankin, who is a senior lecturer. The students study theoretical work on language acquisition, compare models and discuss how they can apply those observations in the classroom.

Rankin, who won the President's Award for Distinguished Teaching in 1996, is known for his enthusiasm for his subject. "He is one of those rare individuals who exudes a kind of contagious passion about what he does that actually inspires his students to learn," said German graduate student Mary Campbell. "It is difficult to compose a well-thought-out lesson plan on a daily basis for a grammar class, but Professor Rankin makes it look easy, and at the same time, makes it enjoyable for his students."

To help graduate students develop lesson plans, Rankin currently is creating a website with suggested exercises for every class meeting of the introductory courses, as well as links to songs, pictures and video clips for use in class. The materials emphasize one-on-one interaction in class.

"You can parrot back what the teacher says, but that's not the same as creating meaning," Rankin said. "We try to get them to create meaning. I want to include more than just grammar in their German education. It's grammar in the service of communication and interaction."

Rankin has dramatically improved the department's introductory language courses and its training of graduate students, said Michael Jennings, chair of the German department. "He's a brilliant innovator," Jennings said. "Our graduate students are sought after as proven teachers, and Jamie does that by example."

To enhance his students' abilities to not just understand German but speak it every day, Rankin created the Princeton-in-Munich program, which takes a group of students abroad every June for a month of intensive language instruction at the Goethe Institut. The program also offers students the opportunity to stay with a German family, travel to Berlin and take in cultural activities.

"Students who participate in the program are much more excited about German culture and language," Rankin said. "We see a rise in the number who end up majoring in German or earning a certificate."

In his scholarly work, Rankin studies the dynamics of foreign language classrooms.

"I look at the way teachers learn to teach, how students learn the fastest and how methodologies are implemented in the classroom," he said. Much of his research involves observing classroom interactions between students and teachers, which he often undertakes in collaboration with graduate student assistant instructors in the department. Rankin recently published a paper, written with former Princeton graduate student Florian Becker, who is now an assistant professor of German at Bard College, that explored the effect of reading theoretical literature about teaching on novice language instructors. They discovered reading the essays had a profound effect, "but it was not so much the literature as the opportunity for reflection," Rankin said.

Undergraduates who receive an A in "Beginner's German I" have the opportunity to take "Intensive Intermediate German" with Rankin, a double-credit class that meets five days a week at 8:30 a.m. for a total of nine hours a week.

"It is a testament to his vigor and love of teaching that, despite the class' scheduled 'kick-off' at 8:30 each morning, very few students are late and almost none are absent, day-in, day-out," said sophomore Chris Schlegel, who took the class during spring semester. "Every moment — even when we are just speaking in small groups — is instructional, and absolutely nothing is monotonous or uninteresting." Schlegel recently decided to major in German, thanks in part to his experiences studying with Rankin. "Professor Rankin has helped define my academic career at Princeton," he said.

Rankin makes himself accessible to students in the classroom and outside of it. He throws a yearly dinner for students in his German classes where German fare is served and a German film is screened. He arranges music for the Nassoons a cappella group, accompanies student recitals on the piano and works with the music team of the Princeton Evangelical Fellowship. He eats 10 meals a week at Mathey College, where he has been a faculty fellow since 1992, as well as hosting the German table there on Wednesday nights.

Rankin loves running, and he has trained for several marathons with students, including alumnus Ken Fockele, who ran the Marine Corps Marathon in Washington, D.C., alongside Rankin and another student in 2005. 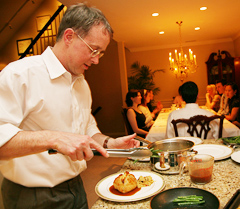 "Even more than his expertise in the classroom, we all appreciated the effort he put into getting to know us outside of class," said Fockele, a member of the class of 2006. "He invited us to dinner at his house and cooked for us. He took extra time, outside of class, to teach me how to keep my Georgia accent from peeking through my German. He is intensely dedicated to teaching and to engaging with his students as fellow people. He is a teacher in the greatest sense, a guide and example in all things."

Rankin's own experiences as an undergraduate — when he got to know his professors through dinners at their homes and other casual events beyond class  — convinced him that he wanted to foster that bond with his own students. "The kind of language teaching I'm doing has to do with communication and interaction," Rankin said. Getting to know students outside the classroom "makes me a better teacher."