Alessandra Brancone, a high school student from the Abruzzo region in central Italy, attempts to identify an unknown gas as part of the Gran Sasso-Princeton Physics Summer School, which runs through Aug. 15. Brancone and 21 other Abruzzo high school students are spending three weeks on campus for the annual intercultural program, which is designed to introduce them to both laboratory physics and American life.

Above left: Assistant Professor of Physics Cristiano Galbiati, at left in blue shirt, offers an introduction to laboratory work to the Italian students, most of whom have only studied science with textbooks.


Below left: Gran Sasso participants keep a notebook of their lab work as part of their introduction to professional scientific work. Researchers are required to keep lab notebooks, which are legal documents detailing their experiments.


Bottom left: Italian students, from left, Antonio Nenna, Giuliano Gustavino and Francesco De Angelis work together to identify an unknown gas, applying the theories they learned in the classroom earlier in the week. The Gran Sasso program is organized, as are most Princeton science courses, to emphasize hands-on lab work and problem solving. 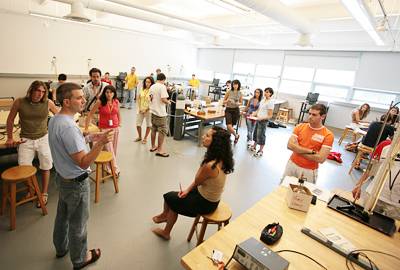 Far from their homes in the mountains of central Italy, a group of 22 high school students are spending three weeks on the Princeton campus, plunging deeper into science and American society than they ever have.

Now in its fourth summer, the Gran Sasso-Princeton Physics Summer School draws promising young talent from the Italian region of Abruzzo, which is also home to the Gran Sasso National Laboratory. Gran Sasso is conducting a major physics experiment involving Princeton scientists, who view the summer school partly as an opportunity to give back to the communities that support their research.

"Once, after taking a few Princeton undergraduates there, we decided to bring a few Italian students back with us," said Cristiano Galbiati, an assistant professor of physics who is also from Italy. "We try to teach them a bit of science, but also give them the chance to live in a different culture for a few weeks. That can be important for their development, as some of them have never set foot out of their country, so it's a big life experience for them." 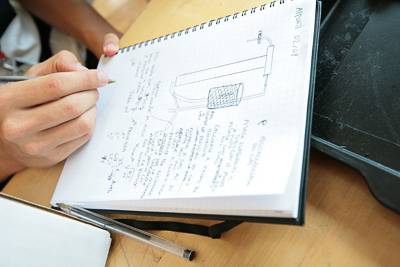 The summer program, founded by Princeton Professor of Physics Frank Calaprice and expanded by Professor of Physics Chiara Nappi, is tailored to the students' particular needs: It offers them English language lessons and day trips to nearby cities as well as hands-on experience in a physics lab. It is this unique combination of opportunities that attracted high school senior Federico Di Donato to the school, which runs through Aug. 15.

"I really want to see New York, of course," he said, "but I'll probably study physics at university next year, and this is my first real chance to use lab equipment."

Di Donato was looking up from a large transparent tube filled with an unknown gas he was trying to identify by applying the physical theories he had learned from a lecture earlier in the week.

"We never get this sort of lesson in Italy," he said. "Classes are really abstract there. But here we can actually see what we are studying."

Galbiati said the lab work, which like most Princeton science instruction is oriented toward problem solving rather than rote memorization, would serve students well no matter what they choose to do in the future. 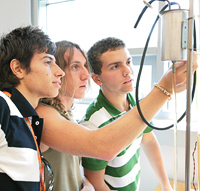 "We're not necessarily trying to turn everybody into physicists -- they are still young enough that they should be looking around," he said. "But they can take the lessons they are learning today with gases, for example, and then apply it to different curricula. It's going to help them in a number of fields, like medicine, biology or engineering."

While Martina Tacconelli is still exploring her options for the future, her lab partner, Alessandra Brancone, has already been bitten by the physics bug.

"Physics is the only thing that can explain all of nature, so I really like learning about it," said Brancone, who has already developed a fascination with relativity. "I'm still amazed that something that takes three seconds for me could take a whole minute for someone else traveling at a different speed. I learned that here for the first time."

Experiences like Brancone's are not uncommon, and the regional university in Abruzzo has seen several summer school alumni enter as science majors.

"We have some feedback on some of our former students who are now at the University of L'Aquila," Galbiati said. "A professor there who I'm working with on a dark matter project has some new students that are planning to join him because they came to our summer school. That was their first exposure to the research conducted at the Gran Sasso lab."

The interaction between the students and the scientists working in Italy has had the added benefit of increasing understanding of the experiment going on at the Gran Sasso lab among members of the local communities. A research group led by Calaprice is conducting a major international particle physics experiment there involving the search for neutrinos.

"The school has had a major impact on how the lab is perceived in the surrounding region," said Galbiati, who also is working on the project. "People were not aware of what was going on because they just saw this big steel door. Now that the students are traveling back and forth every summer, the local population is very supportive of both the experiment and the educational opportunity we're providing."

The director of the Gran Sasso lab, Eugenio Coccia, agreed that the program was a valuable resource to the local communities.

"I came to Princeton last January with the governor of Abruzzo, who was so impressed that the region is now contributing about half the cost of transporting and boarding the students," Coccia said. "People are beginning to understand the value of this kind of educational program."

The greatest value was for the students themselves, he said.

"They come back to Italy really enthusiastic from the experience," said Coccia, who taught at the school himself this summer. "It opens their minds to what a university campus can be. It lets them meet their American colleagues, hear talks from scientific celebrities and have the opportunity to play baseball. And the main result is most of them will choose a scientific degree at the university."