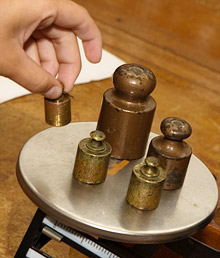 Students must transcend language barriers and technical challenges as they work through a three-hour classic physics experiment, one of several they will conduct in the program, using weights and other lab equipment to identify a gas. (Photo: Brian Wilson)

They come from two different parts of the world, more than 5,000 miles apart.

Yet, working on a challenge to identify a gas through its basic characteristics, two groups of students from South Dakota and a central region of Italy joined forces on a rainy summer afternoon in Princeton's McDonnell Hall to ferret out the answer.

Over the course of three hours, the 30 students worked in teams, using their common bond -- a love of science -- and their wits -- Italian-English dictionaries and some hand signals -- to successfully complete the problem.

"They are working on a classic physics experiment," said Cristiano Galbiati, an assistant professor of physics and a native of Italy, as he wove his way among the lab tables, watching and listening. He added, smiling, "They are also doing an experiment in socializing."

The students are part of a three-week summer program known as the Gran Sasso-South Dakota-Princeton Physics Summer School. For the first time this year, the program combined two separate programs into one. Both groups are composed mainly of recent high school graduates with talents in science and math. Both teams are from rural regions. And both are located near prestigious underground physics laboratories where scientists are conducting cutting-edge experiments.

"We all have a lot in common," said Haaken Phelps of Brookings, S.D., clutching a glass beaker as he measured its contents. "And it's pretty inspiring to be here."

Mandi Durch of Newell, S.D., said she hadn't been sure whether she could triumph over language differences, especially under the pressure of a lab experiment, to work with her labmates from Italy. "But we're doing fine," she said, as she worked with Marina Primavera of Guarnagrele, Italy, and Alice D'Amico, of Sant'Angelo, Italy, as they measured the speed of sound in several gases. "When we don't understand each other, we use this," she said, pointing to an Italian-English dictionary nearby. Primavera and D'Amico agreed.

At another table, Keely Krolikowski of Martin, S.D., waved to her labmates, Gianmarco DeDominicis of Giulianova and Maria Cristina Fedele of Lanciano, to join her at an instrument table. They pored over a lab notebook, displaying sequences of numbers -- science's universal language. "We are all working hard -- we all want to do well," Krolikowski said.

"They are all excited and interested," said Adriano DiGiovanni, a postdoctoral researcher working with the students. "It is going well." 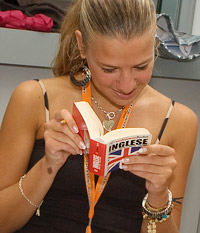 Alice D'Amico of Sant'Angelo, Italy, consults her Italian-English dictionary in the midst of a physics experiment. (Photo: Brian Wilson)

The Italian students, who speak some English but are not yet fluent, hail from the Abruzzo region of Italy, where towns dating back to the Middle Ages have names such as Sant'Angelo, Tortoreto, Penne and L'Aquila. The sector was struck by an earthquake in April that killed about 300 people and left tens of thousands homeless. One student in the group visiting Princeton, Daniele Martini, lost his home in L'Aquila, the house collapsing as the family slept. Even worse, his high school physics teacher died in the disaster. "That's life. You have to accept it," said Martini, shrugging sadly.

The area is also the home base of the Gran Sasso National Laboratory, a vast underground experiment facility named for the spectacular mountain range that spans the region. Princeton scientists have a long-standing collaboration with researchers at the laboratory and started the student program in appreciation for the intellectual and cultural rewards they had enjoyed.

The 20 students chosen for the program were selected on a competitive basis from high schools in the region. They are attending physics classes and special lectures at Princeton and receiving English language instruction. They also are exploring American culture, traveling to destinations such as New York City and Washington, D.C.

The Italian student visits are supported by the Italian National Institute of Nuclear Physics as well as the Italian Embassy in Washington and three local groups: the Princeton-Pettoranello Foundation, Dorothea's House and the Princeton Italian-American Sportsman Club.

"My personal philosophy in doing this was to do something transformative, something that would transform a person's idea of what he or she wanted to do with his or her life and open his or her eyes to something that might be exciting," said Frank Calaprice, a Princeton professor of physics who started the Gran Sasso student program in 2003. A research group, led by Calaprice and including Galbiati and Princeton professor of chemical engineering Jay Benziger, is conducting a major international particle physics experiment at the Gran Sasso lab involving the mysterious subatomic particles known as neutrinos.

The program educates students about the science going on in their own backyard. It also introduces them to experiment-driven science to which many are not exposed in high school. And now Calaprice is hoping they will learn from American students who are both like and unlike themselves.

Cristiano Galbiati, an assistant professor of physics at Princeton (second from right), challenges students from his native Italy and from South Dakota to solve a physics experiment and to forge a common bond. The students pictured, from right, are: Karin Hanson of Sioux Falls, S.D., and Davide Guarracino and Davide Costantini, both of Silvi Marina, Italy. (Photo: Brian Wilson)

The South Dakota program had a different genesis. Calaprice decided to start it two years ago after a meeting in Washington, D.C., attended by South Dakota officials, including Gov. Michael Rounds, and physicists. The meeting was prompted by a National Science Foundation announcement that the agency would base a major new research facility at the Homestake Mine in Lead, S.D. The former gold mine had been the site of world famous experiments on neutrinos by Ray Davis of the University of Pennsylvania, who had been guided by the calculations of astrophysicist John Bahcall, a faculty member of the Institute for Advanced Study in Princeton and a visiting lecturer with rank of professor at Princeton University.

Inspired by the Washington speech of Rounds, who stressed the importance of the new underground laboratory to education, Calaprice contacted Rounds and suggested a joint summer school involving students from South Dakota and Italy. Rounds liked the idea and obtained financial support from 3M to fund the Davis-Bahcall Scholars Program. Since then, Calaprice, Galbiati and Helen Ju, an academic support administrator in Princeton's physics department, have worked closely with Barbara Szczerbinska, a physics professor at Dakota State University, to bring the program to fruition and make it possible to bring 10 students from South Dakota to Princeton this summer.

Before arriving in Princeton with the Italian students in mid-July, the South Dakota students toured the Homestake Mine, CERN's (the European Organization for Nuclear Research) particle accelerator laboratory in Switzerland, and the Abruzzo region and the Vatican, among other spots. 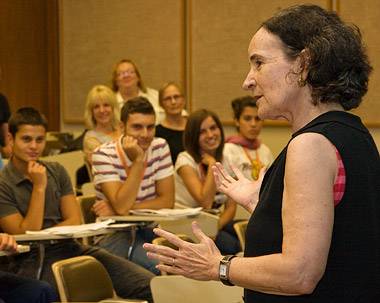 Neta Bahcall, the Eugene Higgins Professor of Astronomy at Princeton, gave the students in the physics summer program, including a group known as the Davis-Bahcall Scholars, a personal account of how her late husband, John Bahcall, conducted a career-long quest with physicist Ray Davis to understand how solar neutrinos are produced by the sun. John Bahcall, who was a faculty member of the Institute for Advanced Study in Princeton and a visiting lecturer with rank of professor at Princeton University, died in 2005. (Photo: Denise Applewhite)

At Princeton, the Davis-Bahcall Scholars, along with the students from Italy, met with Neta Bahcall, the Eugene Higgins Professor of Astronomy at Princeton and the widow of John Bahcall. In a series of lectures, she described some of the advanced research the students could expect to see conducted at the underground facilities in South Dakota and Italy. And she told how John Bahcall's calculations on neutrinos in 1964 paved the way for decades of exploration and inquisition.

"It's a sad story for me to tell, in a way," said Neta Bahcall as she wistfully displayed a series of photos of her late husband, one from when they first met in the early 1960s showing them smiling and clutched in a warm embrace, her hair streaming in the wind. "But it's a wonderful story of discovery, the kind that can certainly inspire young scientists."

John Bahcall, who died in 2005 at the age of 70, conducted a career-long quest with Davis to investigate how many neutrinos the sun produces and how many reach Earth. Their work was confirmed by another group in 2001.

Andrea Galassi of L'Aquila, Italy, had one word to describe Neta Bahcall's account of the researchers' dogged persistence: "Inspiring." 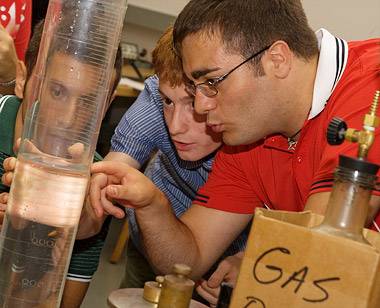 Students from the Abruzzo region of Italy have been coming to the summer physics program at Princeton for six years. Their own science education emphasizes theory, according to the program coordinators, so they relish the opportunity to work with Princeton's physics lab equipment. Shown here, from left, working together are: Gianluca Colasante of Guardiagrele, Lorenzo Stipani of Francavilla and Corrado Colasante of Guardiagrele. (Photo: Brian Wilson)

"The fact that they were re-writing physics right there in South Dakota, my home state, and that someone will continue to do that is very exciting to me," said Tyler Vogel of Rapid City, upon hearing Neta Bahcall's lecture. Vogel will be entering the South Dakota School of Mines in the fall and said his summer experience is leading him toward physics.

In June, as he thought ahead about meeting the Italian students through the program, he worried a bit. "I wasn't sure how we were going to get along," he said. At a pool party attended by both groups over one recent weekend, Vogel and a few other South Dakotan students started to sing "Under the Bridge," a song by the alternative rock band, the Red Hot Chili Peppers. Then three Italian students joined in, finishing the verse. "That was great!" Vogel said.

Both groups, who join up for social outings and live together at dormitories in Forbes College, will remain on campus through Aug. 8.