The detection announced Aug. 28 of an elusive subatomic particle forged in the sun's core was a crowning achievement in the 25-year international effort to design and build one of the most sensitive neutrino detectors in the world, a feat that directly involved Princeton University scientists and engineers. With ongoing improvements in its sensitivity, the Borexino neutrino detector located a mile beneath a mountaintop at Italy's Gran Sasso National Laboratory has the potential to reveal more about how the sun and other stars produce energy.

Sometimes called "ghost particles," neutrinos are extremely difficult to detect because they slip through ordinary matter without leaving a trace. The four-story high Borexino detector is one of a handful worldwide that are capable of detecting the weakest of the neutrinos, including the proton-proton solar neutrino that is emitted during the first of several fusion reactions that generate 99 percent of the sun's energy. The discovery of the proton-proton neutrino was reported in the journal Nature.

"The detection of this type of solar neutrino confirms an important piece of the theory about how the sun makes energy, and if you understand the sun then you understand stars in general," said Professor of Physics Frank Calaprice, who has led Princeton's part of the Borexino collaboration.

The Borexino collaboration, which announced the detection of an elusive solar neutrino in August, involved several scientific contributions from Princeton over its 25-year history. The detector consists of two massive transparent nylon balloons filled with a petroleum-based liquid called "scintillator," which emits a flash of light when it detects a neutrino. These flashes are picked up by an array of sensors embedded in a stainless steel sphere that surrounds the balloons. (Image courtesy of the Borexino collaboration)

It takes tens of thousands of years for the energy made in the sun's center to migrate to its surface. Neutrinos, on the other hand, travel at near the speed of light, reaching Earth in about eight minutes. So neutrinos essentially reveal what the sun's surface will be like thousands of years in the future. The Borexino result revealed that the sun's energy as measured by proton-proton neutrinos agreed with the energy measured at the sun's surface within about 10 percent, indicating that the sun's energy output has remained stable over the last 100,000 years or so.

In addition to providing a way of forecasting the sun's energy production for the next 100,000 years, the detection of these fleeting solar particles offers a way to probe the composition of the sun's core, Calaprice said: "In principle you can tell what is happening in the center of the sun by measuring these neutrinos."

A type of neutrino that has not been detected before but is predicted to exist — the carbon-nitrogen neutrino — could put the controversy to rest. These neutrinos form during the process that makes the other 1 percent of the sun's energy. Although the carbon-nitrogen process contributes little to the total energy produced in slowly evolving stars such as our sun, it is common in massive, rapidly evolving stars in the universe.

Borexino is close to having the sort of sensitivity needed to detect carbon-nitrogen neutrinos, Calaprice said. "If we measure carbon-nitrogen neutrinos, we may be able to learn something about the amount of carbon and other elements in the core of the sun," he said. "This could help researchers explore whether the formation of the planets affected the composition of the outer zone of the sun."

Princeton faculty members and students have been involved in the design and construction of Borexino since its inception in the early 1990s, Calaprice said. The project is funded by Italy's National Institute for Nuclear Physics and the U.S. National Science Foundation, as well as by science agencies from Germany, Russia, Poland, Hungary and several other countries.

The detector, which was switched on in 2007, consists of two giant, transparent nylon balloons, one nested inside the other, that are filled with a petroleum-based liquid called "scintillator," which emits a flash of light when a neutrino is detected. That flash of light is picked up by roughly 2,000 sensors spaced evenly around the interior of a stainless steel sphere that surrounds the balloons.

The idea for using balloons to contain the liquid came from Calaprice's long-time colleague, Robert Parsells, an engineer at the Princeton Plasma Physics Laboratory. "It was one of those crazy ideas that sometimes work," Calaprice said.

Engineers and students at Princeton designed and built the balloons under the guidance of Calaprice and Professor of Physics Cristiano Galbiati. The team included then-graduate students Laura Cadonati, now an associate professor of physics at the University of Massachusetts-Amherst, and Andrea Pocar, now an assistant professor at the University of Massachusetts-Amherst. With Princeton engineer Allan Nelson and others, the researchers assembled the balloons — which were 28-feet and 38-feet in diameter — by gluing together strips of nylon in a dust-free "cleanroom" in the physics building. They then inflated prototypes of the balloons for testing in Princeton's Jadwin Gym before transporting them to Italy.

While members of the collaboration from Italy and other nations worked on the network of sensors and the electronics to process the results, the Princeton team made sure that the entire detector was free from background contaminants that could obscure the results. "Within the collaboration, the Princeton group historically has tackled some of the most challenging aspects of the experiment," said Pocar, who now works on Borexino data analysis at Amherst and served as the corresponding author on behalf of the collaboration for the finding reported in Nature. 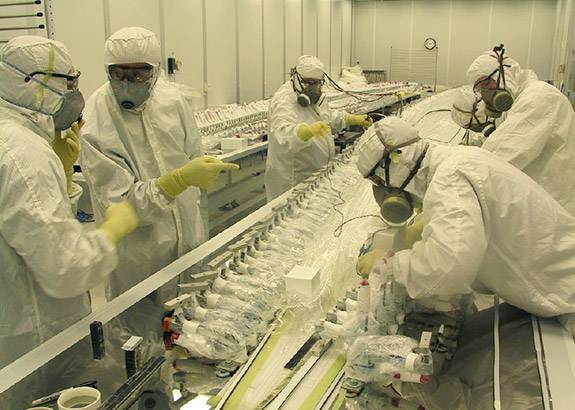 In the early 2000s, Princeton graduate students and engineers built large transparent nylon balloons to contain the scintillator. The team glued strips of nylon together in a special cleanroom constructed in the physics building to be as free as possible of radioactivity and dust. From left to right: Andrea Pocar, then a graduate student and now an assistant professor at the University of Massachusetts-Amherst; the late John Bahcall, a physicist at the Institute of Advance Study, who was instrumental in studying solar neutrinos and advocating for the Borexino project; and Princeton technicians Charles Sule, Allan Nelson, Elizabeth Harding (in background) and Brian Kennedy. (Image courtesy of Frank Calaprice, Department of Physics)

Leave no trace of radioactivity

Solar neutrinos stream from the sun to Earth at a rate of 420 billion per second per square-inch but are invisible and harmless. Their signals are nearly impossible to distinguish from the signals coming from the decay of common radioactive elements such as radon. The extremely clean and radioactive-free environment achieved at the Borexino detector has enabled the elimination of false detections, yielding the sensitivity needed for the detection of the proton-proton neutrino, which was not part of the project's original goals, Calaprice said: "No one really thought that we could succeed with this experiment — it was too hard to get the backgrounds down as low as were needed."

To reduce false readings from radioactive particles — which are common in rocks and water in Italy and New Jersey — Calaprice turned to Princeton's Jay Benziger, professor of chemical and biological engineering, an expert in the industrial-scale refining of petroleum. "We realized we needed surfaces that dust cannot stick to, so we borrowed techniques from the pharmaceutical industry, and we used purification methods borrowed from the petroleum industry, all to get the background down," Benziger said. The resulting purification system was built and tested at Princeton before being shipped to Gran Sasso.

In the past three years, a team of undergraduates successfully improved the purification process. Puzzled by the difficulty of removing a certain radioactive element called polonium-210, Brooke Russell, a Class of 2011 physics student who stayed on as a staff researcher, discovered a publication showing that the polonium can be converted by bacteria to another compound that allows it to resist being removed by the techniques the group was using. The team, which included William Taylor, Class of 2014, and Christian Aurup, a summer research associate and undergraduate at the University of Delaware, made adjustments to the procedure that dramatically reduced the level of the contamination. The techniques developed at Princeton to prevent false detections at Borexino have been employed in the DarkSide dark matter detector also located at Gran Sasso, as well as other neutrino and dark matter detectors around the world.

"The thesis experience and also the two years after graduation were really pivotal for me," Russell said. "Before doing my thesis, I had not been exposed to experimental physics. I enjoyed it so thoroughly that I decided to pursue it as a career," said Russell, who is now in her second year of graduate studies at Yale University.

With this latest purification step, Calaprice said, he hopes that Borexino can detect the last known solar neutrino, the carbon-nitrogen neutrino. The detector also will begin searching for the so-called "sterile neutrino" that some physicists think exists. If it is found, this type of neutrino could explain discrepancies in the so-called standard model of particle physics.

The article, "Neutrinos from the primary proton–proton fusion process in the Sun," was published Aug. 28 in Nature.