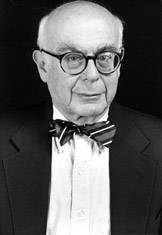 Robert Gutman, an influential professor and critic who was part of the University's architecture community for more than 40 years, died Nov. 23 in Princeton of a heart attack. He was 81.

Although trained as a sociologist, Gutman had focused his research on the field of  architecture since the 1960s. He was a key figure in American academics in bringing social science into the heart of architectural education and practice. With great intellectual curiosity, he explored the relationships among public policy, architects, buildings and their users.

Gutman was a member of the sociology faculty at Rutgers University from 1957 to 1996. In 1965, he received a grant from the Russell Sage Foundation to explore interactions between architecture and sociology. He became a special student of architecture at Princeton and at the Bartlett School of Architecture of University College London.

Robert Geddes, the dean of Princeton's School of Architecture at the time, invited him to sit in on classes and subsequently recruited him to become a visiting professor at the University in 1969. Gutman held that position until his retirement from Rutgers, when he was named a lecturer in architecture at Princeton. In the 1970s, Gutman, Geddes and Suzanne Keller, a professor of sociology at Princeton, created a pioneering research collaborative, supported by the National Science Foundation, to work on "The Behavioral Assessment of the Built Environment."

"Bob came to us from the social sciences, and devoted his life to connecting architecture and society. He never lost hope that people and buildings could work well together," said Geddes, the William R. Kenan Jr. Professor of Architecture Emeritus. "He did remain an outsider in the sense that he was always a social scientist, but he was also an insider in that he was such a remarkable colleague."

Stan Allen, the dean of the School of Architecture since 2002, said one of the pleasures of being back at Princeton was renewing his acquaintance with Gutman. "I first met Bob when I was a graduate student here in the middle 1980s," said Allen. "At that time, he struck me as a bit of an enigma: a sociologist resident in the School of Architecture who would speak up at reviews, always with something fresh, interesting and unexpected to say.

"What impressed me most in getting to know Bob later was his genuine intellectual curiosity," Allen continued. "This is what drove him to focus first on cities and housing, and later to the sociology of the architectural profession itself. For someone without an architectural training, his architectural instincts were razor sharp, but there was always a twist, an innate skepticism toward received opinion, and a sense that an argument could always be clarified and pushed into new territory. He will be greatly missed."

Ralph Lerner, the George Dutton '27 Professor of Architecture who served as dean from 1989 to 2002, said, "Bob was extraordinary -- everyone could count on him. For me, he was a tremendously loyal friend for over 20 years, mentor and trusted adviser. The breadth of his intellect and experience, knack for seeing connections across disciplinary boundaries, an unfailing memory, amazing generosity and patience, and the ability to see the humor in almost any situation were the hallmarks of his character. The School of Architecture will be 'put to the test' in finding someone to fill his shoes."

Gutman's background ranged from demography to psychoanalysis; his objects of study stretched from controversial buildings to housing policies. At Princeton, he taught "The Sociology of Contemporary Design" and "Theories of Housing and Urbanism." His research was disseminated through frequent articles in leading architectural and scholarly journals, including Architecture, Progressive Architecture and Architectural Record.

He also summarized and focused his research in several books. The viewpoints in the collections of essays he edited, "Neighborhood, City and Metropolis" with David Popenoe of Rutgers University (Random House, 1970) and "People and Buildings" (Basic Books, 1972), explored the melding of sociology and architecture in the wake of the failures of modern architecture and planning, especially public housing, and the social upheaval of the late 1960s. "People and Buildings" quickly became a classic work in the field.

In addition to his role at Princeton, Gutman also held visiting professorships at Stanford University, the University of Michigan, the Bartlett School of Architecture and the University of Stockholm and, for two terms, he was a visiting member of the Institute for Advanced Study. He also was an honorary member of the American Institute of Architects. He served as chair of the Environmental Design Research Association, and he was a member of the advisory councils of the architecture schools at Harvard, Cornell, Parsons, Rice and Washington University.

A symposium in his honor, "Architecture and Public Policy," was organized by Princeton's School of Architecture in 2003. As Gutman stated at the event, "It is not really a question then whether architecture and public policy, architecture and politics are connected. They are linked inextricably. The critical issue now is whether contemporary architects as a professional group and a community should be more active in formulating public policy as it affects the built environment."

Gutman was born on Aug. 3, 1926, in New York City. He attended Columbia University, receiving a B.A. in 1946 and a Ph.D. in sociology in 1955. After completing his graduate course work, he taught sociology at Dartmouth College from 1948 to 1957. He married Sonya Rudikoff, an author with strong interests in literature and art, in 1950. She died in 1997.

He is survived by his son and daughter-in-law, John Gutman and Elizabeth Duffy of Lawrenceville, and their children Lucy and Teddy; and his daughter and son-in-law, Elizabeth Gutman and John Wriedt of Princeton, and their daughter Sylvie.

A private service for the family has taken place. A memorial service is planned for 3 p.m. Saturday, Jan. 19, in the Princeton University Chapel.