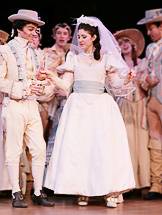 Figaro (sophomore Thomas Kneeland) and Susanna (senior Lily Arbisser) celebrate at their wedding in Mozart's "The Marriage of Figaro," being presented by the Department of Music at 8 p.m. Saturday, Jan. 12, and at 2 p.m. Sunday, Jan. 13, in Richardson Auditorium, Alexander Hall.

At left: Figaro, second from right, discovers that Bartolo (Jonathan Britt, a local performer who is the only non-student in the cast), left, and Marcellina (senior Sarah Vander Ploeg), right, are his parents. They have given their blessing for him to be married to Susanna, second from left. Bartolo obviously has unfortunate memories of his "youthful indiscretion" with Marcellina. 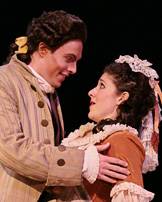 The Count (senior Michael Scharff) makes moves on Susanna. She is not happy about this but it's all part of her and Figaro's plan to humble him in the end.

At the end of the opera, the Countess (senior Jocelyn Miller) forgives the Count for his pursuit of Susanna.

The Princeton University Department of Music will present a production of Mozart's renowned opera, "The Marriage of Figaro," at 8 p.m. Saturday, Jan. 12, and at 2 p.m. Sunday, Jan. 13, in Richardson Auditorium, Alexander Hall.

The cast includes some of the University's most talented singers in the principal roles, along with members of the Glee Club as the chorus and a portion of the Princeton University Orchestra.

The production will be conducted by Richard Tang Yuk, and the stage director is David Kellett. The production will be fully staged with period costumes and sung in an English translation by Ruth and Thomas Martin. The cast was selected by open audition last spring and learned its roles over the summer. The students have been enrolled this fall in Music 214, "Projects in Vocal Performance." 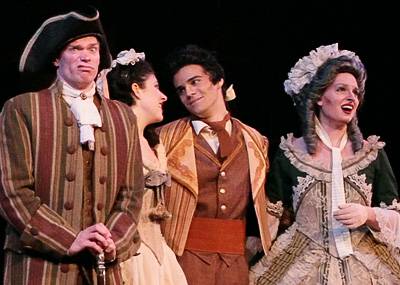 "There was so much interest in the opera, we decided to double cast many of the roles to allow more students to share in the experience of performing in a fully staged opera," said Tang Yuk. "It is twice as much work to coach two casts, and takes almost twice as long to stage it, but the students are very excited to be preparing this magnificent score, and have been putting in many extra hours outside of class to attend private vocal coachings, orchestra readings and costume fittings."

Mozart's 1786 opera is a comedy of love in all its forms, from adolescent crushes to conjugal affection to forbidden lust. The servants Figaro and Susanna are to be married, but everyone from their master the Count to the gardener seems to be getting in the way. The page Cherubino longs for the Countess, the Count has abandoned the Countess in pursuit of Susanna, and the old maid Marcellina seems to have a liking for Figaro. Can Susanna and Figaro survive a day of mistaken identity, disguises, pretended seduction and serenading with their wedding and love intact? 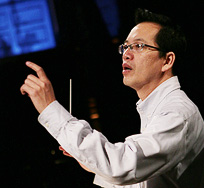 Mozart's score, set to a libretto by Lorenzo da Ponte, based on a play by Beaumarchis, features some of the composer's most famous music, including Figaro's aria "Non più andrai," the Countess's "Porgi amor" and Cherubino's "Voi che sapete."

Tickets are $20 for general admission and $10 for students and are available online through University Ticketing, by telephone at (609) 258-9220 and in person at the Frist Campus Center box office.