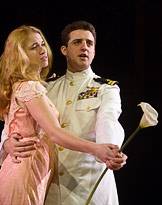 Students from Princeton's Department of Music will present a classic tale in a 20th-century context with "The Return of Ulysses" at 8 p.m. Friday and Saturday, Jan. 9-10, in Richardson Auditorium of Alexander Hall. Claudio Monteverdi's opera is a compelling account of the return of Ulysses (senior Adam Fox), right, from war to his faithful wife Penelope (junior Alexis Rodda), left, after a 20-year absence. In conjunction with the performance, an interdisciplinary conference, "Performing Homer: From Epic to Opera," will take place Friday evening and all day Saturday in McCormick Hall. 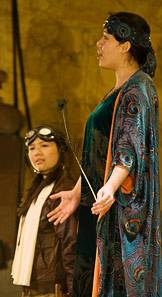 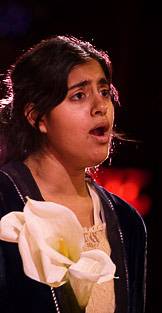 Penelope's nurse Ericlea (junior Anu Pattabiraman) debates whether she should tell Penelope that she has recognized Ulysses. 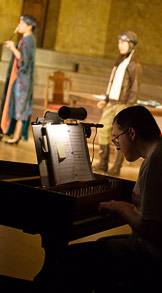 Harpsichordist Nicholas Lockey, a graduate student, is one of four continuo players who accompany the opera onstage.

Princeton University students will present "The Return of Ulysses," Claudio Monteverdi's opera about desire, greed and marital fidelity, with a 20th-century twist at 8 p.m. Friday and Saturday, Jan. 9-10, in Richardson Auditorium of Alexander Hall.

In conjunction with the performance, an interdisciplinary conference titled "Performing Homer: From Epic to Opera" will take place Friday evening and all day Saturday in McCormick Hall. 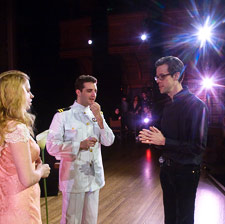 While the original work is set during the Trojan War, stage director Andrew Eggert has set his production during World War I. Here, from right, Eggert works with Fox and Rodda on the final scene of the opera.

Eggert is a freelance stage director with extensive experience in baroque opera. He has worked with professional companies including Chicago Opera Theater and Glimmerglass Opera, and studies musicology at Columbia University, where he is writing a dissertation on the staging of 17th-century opera.

Based on well-known episodes from Homer's "Odyssey," Monteverdi's opera, with libretto by Giacomo Badoaro, is a moving and dramatically compelling account of Ulysses' return from the Trojan War to his home in Ithaca and his faithful wife Penelope after a 20-year absence. Eggert's production, set during World War I, provides a vibrant 20th-century context for this classic tale.

This performance of Monteverdi's opera is part of a continuing collaboration on Baroque opera involving musicologists and performers at Princeton led by Pratt and Wendy Heller, professor of music. Pratt first conducted Monteverdi's "The Coronation of Poppea" in January 2001, and since that time Pratt and Heller have worked together on productions of two operas by Monteverdi's younger contemporary, Francesco Cavalli, "La Calisto" and "Egisto."

Those planning to attend the opera are invited to McCormick Hall at 4 p.m. Friday for a preconcert symposium presented by Heller and students of Music 515, "Topics in the History of Opera." No registration is necessary.

The conference "Performing Homer: From Epic to Opera" will feature an international roster of scholars considering the performative qualities of Homer's epic from a variety of perspectives, including classics, drama, comparative literature, musicology and art history. Heller, who also is director of the Program in Italian Studies and a specialist in 17th-century Venetian opera, is organizing the conference.

Distinguished speakers will include Ellen Rosand, author of "Monteverdi's Last Operas: A Venetian Trilogy," and Edith Hall, author of "The Return of Ulysses: A Cultural History." The conference is sponsored by the Department of Music, Program in Renaissance Studies, Program in Italian Studies and Program in Hellenic Studies, with the support of the Stanley J. Seeger Hellenic Fund and the David A. Gardner '69 Magic Fund through the Council of the Humanities.

Tickets to the opera are $10 for general admission or free for students. They are available online at University Ticketing or by calling (609) 258-9220.

The conference is free but pre-registration is requested by e-mailing astearly@princeton.edu. For more information on the opera and conference, visit the conference website.