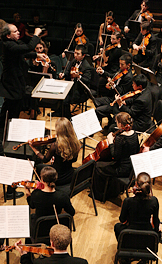 Michael Pratt has led the Princeton University Orchestra for more than 25 years.

The Princeton University Orchestra, under the direction of Michael Pratt, will present a concert performance of Act 1 of Richard Wagner's "Die Walküre (The Valkyrie)" at 8 p.m. Thursday March 9, and Saturday, March 11, in Richardson Auditorium, Alexander Hall.

Joining the orchestra will be Metropolitan Opera tenor Adam Klein as Siegmund; Othalie Graham, who recently sang Aida with the Boheme Opera, as Sieglinde; and Jonathan Prescott, a veteran of many Wagner and Verdi roles in Europe and the United States, as Hunding.

"The Valkyrie" is the second of four operas that make up Wagner's signature work, "The Ring of the Nibelung." Built around a story of the struggle for a magical ring of terrifying power, Wagner's operas are an allegory of the corrupting influence of power and its pursuit, and the redemption that only love can bring.

Act 1 of "The Valkyrie" tells a story of forbidden and ultimately tragic love. Twins Siegmund and Sieglinde, who have been separated as young children, meet again as adults, unaware of their identity. They are children of the god Wotan, who manipulates them as part of his scheme to regain the powerful ring. Unknowingly following Wotan's plan, they find each other after lives of terrible hardship and fall passionately in love.

"Princeton audiences rarely have an opportunity to hear this astounding music live," said Pratt, who has conducted the orchestra since 1977. "While he was composing the work in 1854, Wagner said, in a matter of fact manner, that this was the most beautiful music that had ever been composed. I agree with his assessment.

"Music had never before carried such raw and open passion," he continued. "Wagner's orchestra, as always, reveals the inner lives of the characters and the drama with stunning clarity. Act 1 of 'The Valkyrie' stands on its own as a dramatic unit, perhaps better than any other single act in Wagner's output."

The Princeton University Orchestra is made up of nearly 100 undergraduate and graduate student musicians representing a broad spectrum of academic departments. The orchestra plays a wide range of works by composers from the classical period up through new works by Princeton composers.

Tickets for the orchestra's March 9 and 11 performances are $18 for general admission and $5 for students. Senior citizen and group discounts are available. For more information on tickets, contact the Richardson Auditorium box office at (609) 258-5000.