Wilf Hall will be one of four dormitories in the reconstructed Butler College, which is scheduled to reopen in 2009. (High-res version for news media.) 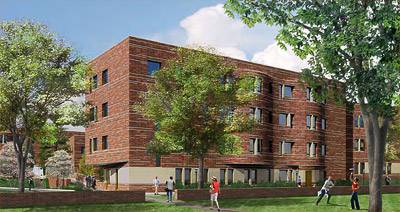 "Wilf Hall will help bring the benefits of the four-year residential college system to our students," said President Shirley M. Tilghman, "and the Wilf Family Fund will strengthen the Jewish community at Princeton as well as the experience of all students by fostering the qualities of leadership and social responsibility that prepare our students to make positive contributions in the world. We are deeply grateful to the Wilf family for their thoughtfulness and generosity."

The gift provides $4.5 million for Wilf Hall and $500,000 for the Wilf Family Fund, which will support programs and initiatives in the CJL that foster student leadership and service both on the Princeton campus and in the wider community.

"Preparing young people for leadership and service to the Jewish community is of great importance to me and to my family," said Wilf, who is involved in local, national and global efforts to ensure the welfare and vitality of the Jewish people. The Wilfs' previous gifts to Princeton include Wilf Hall in the Center for Jewish Life, the main sanctuary used for worship services and other gatherings.

"Jane and Mark Wilf have been generous supporters of the CJL ever since it was built," said Rabbi Julie Roth, executive director of the CJL. "He is one of our honorary trustees and comes to campus for our programs. The new Wilf Fund will significantly expand our ability to provide programs that advance the CJL's goal of inspiring every Jewish student to make an enduring commitment to the Jewish future while promoting crosscultural and interfaith connections among all members of the community."

In addition to financial contributions to Princeton, Wilf gives generously of his time. He is currently serving a 10-year term on the advisory board of the Judaic studies program, and he was a member of the Annual Giving Special Gifts Committee during the Anniversary Campaign for Princeton.

An electrical engineering and computer science major at Princeton, Wilf also earned a law degree from New York University Law School. He is a principal in Garden Homes Development, a family-owned real estate business, and a principal owner of the National Football League's Minnesota Vikings, along with his brother and his cousin. He and his wife Jane, who have four children, are residents of Livingston, N.J.