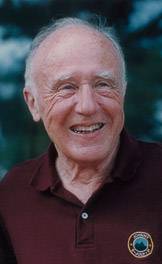 John Wheeler in 1991 Below left: John Wheeler (third from left) walks through the woods at the Institute for Advanced Study with, from left, fellow physicists Albert Einstein of the institute, Hideki Yukawa of Kyoto University in Japan and Homi Bhabha of the Tata Institute of Fundamental Research in India. Photos: Courtesy of the Wheeler family

John Archibald Wheeler, a legend in physics who coined the term "black hole" and whose myriad scientific contributions figured in many of the research advances of the 20th century, has died.

Wheeler, the Joseph Henry Professor of Physics Emeritus at Princeton University, was 96. He succumbed to pneumonia on Sunday, April 13, at his home in Hightstown, N.J.

Over a long, productive scientific life, he was known for his drive to address big, overarching questions in physics, subjects which he liked to say merged with philosophical questions about the origin of matter, information and the universe. He was a young contemporary of Albert Einstein and Niels Bohr, was a driving force in the development of both the atomic and hydrogen bombs and, in later years, became the father of modern general relativity.

"Johnny Wheeler probed far beyond the frontiers of human knowledge, asking questions that later generations of physicists would take up and solve," said Kip Thorne, the Feynman Professor of Theoretical Physics at the California Institute of Technology, a prolific researcher and one of Wheeler's best-known students. "And he was the most influential mentor of young scientists whom I have known."

Wheeler, according to James Peebles, Princeton's Albert Einstein Professor of Science Emeritus, was "something approaching a wonder of nature in the world of physics."

Throughout his lengthy career as a working scientist -- he maintained an office in Jadwin Hall until 2006 -- he concerned himself with what he termed "deep, happy mysteries." These were the laws of nature on which all else is built.

He also helped launch the careers of many prominent modern theoretical physicists, among them the late Nobel laureate Richard Feynman. He learned best by teaching. Universities have students, he often said, to teach the professors.

"Johnny," which is what he was called by everyone, including his children, was born in Jacksonville, Fla., on July 9, 1911, the first of four children, to Joseph and Mabel ("Archie") Wheeler, a librarian and a homemaker, respectively. The family moved when Joseph changed jobs, which happened frequently. Over the years, they lived in Florida, California, Ohio, Washington, D.C., Maryland and Vermont. Wheeler discovered science through his father, who brought books home for the family to read to help him judge whether they were worth purchasing for the library. Wheeler devoured Sir John Arthur Thomson's classic "Introduction to Science" and Franklin Jones' "Mechanisms and Mechanical Movements." He was guided by the second book to build a combination lock, a repeating pistol and an adding machine -- all from wood. He built crystal radio sets and strung telegraph wires between his home and his best friend's. He almost blew off one hand with dynamite one morning, tinkering with material that had been declared off-limits. 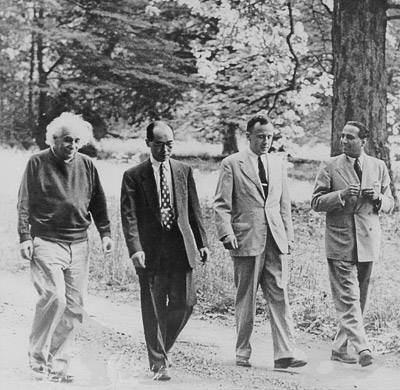 Wheeler was the first in his family to become a scientist, heading to Johns Hopkins University on a scholarship when he was 16, and finishing in 1933, at age 21, with a doctoral degree in physics. He went on to work at the University of Copenhagen with the eminent physicist Niels Bohr, with whom he co-wrote the original paper on the mechanism of nuclear fission that helped lead to the development of the atomic bomb. After World War II, Wheeler joined the Los Alamos Scientific Laboratory Project for a year, playing a central role in developing the hydrogen bomb and serving as a mentor to the physicist Richard Feynman. In 1951, he set up Project Matterhorn at Princeton's new Forrestal Research Center.

He served as a member of the Princeton faculty from 1938 until his retirement in 1976, after which he served as director of the Center for Theoretical Physics at the University of Texas-Austin until 1986.

"Throughout his life, Johnny was an extraordinarily productive theoretical physicist," said Marvin "Murph" Goldberger, the president emeritus of Caltech, who had an office near Wheeler for decades as a longtime Princeton faculty member. "His work was categorized by great imagination and great thoroughness."

Looking back over his own career, Wheeler divided it into three parts. Until the 1950s, a phase he called "Everything Is Particles," he was looking for ways to build all basic entities, such as neutrons and protons, out of the lightest, most fundamental particles. The second part, which he termed "Everything Is Fields," was when he viewed the world as one made out of fields in which particles were mere manifestations of electrical, magnetic and gravitational fields and space-time itself. More recently, in a period he viewed as "Everything Is Information," he focused on the idea that logic and information is the bedrock of physical theory.

"John Wheeler, who started life with Niels Bohr in the '30s, in the nuclear physics era, became the father figure of modern general relativity two decades later," said Stanley Deser, a general relativitist at Brandeis University. "Wheeler's impact is hard to overstate, but his insistence on understanding the physics of black holes is one shining example."

Described by colleagues as ever ebullient and optimistic, Wheeler was known for sauntering into colleagues' office with a twinkle in his eye, saying, "What's new?" He gave high-energy lectures, writing rapidly on chalkboards with both hands, twirling to make eye contact with his students.

He entered physics in the 1930s by applying the new quantum mechanics to the study of atoms and radiation. Within a few years, he turned to nuclear physics because it seemed to hold the promise of revealing new and deeper laws of the microscopic world. But it was "messy," he would later write, and resistant to answers. Besides, working on fission, so crucial to national defense during World War II, was a job, not a calling, he said.

In his autobiography, titled "Geons, Black Holes and Quantum Foam," written with his former student, the physicist Kenneth Ford, Wheeler found "the love of the second half of my life" -- general relativity and gravitation -- in the post-war years. "When they emerged, I finally had a calling," he said.

He liked to name things.

In the fall of 1967, he was invited to give a talk on pulsars, then-mysterious deep-space objects, at NASA's Goddard Institute of Space Studies in New York. As he spoke, he argued that something strange might be at the center, what he called a gravitationally completely collapsed object. But such a phrase was a mouthful, he said, wishing aloud for a better name. "How about black hole?" someone shouted from the audience.

That was it. "I had been searching for just the right term for months, mulling it over in bed, in the bathtub, in my car, wherever I had quiet moments," he later said. "Suddenly this name seemed exactly right." He kept using the term, in lectures and on papers, and it stuck.

He also came up with some other monikers, perhaps less well known outside the world of physics. A "geon," which he said probably doesn't exist in nature but helped him think through some of his ideas, is a gravitating body made up entirely of electromagnetic fields. And "quantum foam," which he said he found himself forced to invent, is made up not merely of particles popping into and out of existence without limit, but of space-time itself, churned into a lather of distorted geometry.

Despite his sunny disposition, he carried with him a secret sadness. "He was devoted to the memory of his younger brother, Joe, a Ph.D. in American history with wife and child, who was killed in the bitter fighting against the Germans in northern Italy," said Letitia Wheeler Ufford, his oldest child. "His brother's last words to him were 'Hurry up, John,' as he sensed that his older brother was working on weaponry to end the war. As he got older, our father wept often over this brother."

And he had a brush with controversy, though he ultimately redeemed himself. In January 1953, while traveling on a sleeper car to Washington, D.C., he lost track of a classified paper on the hydrogen bomb which had been in his briefcase. It was there when he went to bed but was missing by morning. He was personally reprimanded by military officials at the insistence of President Eisenhower and, as a strong believer in national defense was personally embarrassed by the incident. Years later, in December 1968, he was presented with the Fermi Award by President Johnson for his contributions to national defense as well as to pure science. "I felt forgiven," he wrote.

What drove Wheeler so ferociously for so many decades may be best expressed by the physicist himself. In his autobiography, he put it this way: "I like to say, when asked why I pursue science, that it is to satisfy my curiosity, that I am by nature a searcher, trying to understand. Now, in my 80s, I am still searching. Yet I know that the pursuit of science is more than the pursuit of understanding. It is driven by the creative urge, the urge to construct a vision, a map, a picture of the world that gives the world a little more beauty and coherence than it had before. Somewhere in the child that urge is born."

Wheeler received numerous honors over the years, including the National Medal of Science, the Albert Einstein Prize, the Franklin Medal, the Niels Bohr International Gold Medal and the Wolf Foundation Prize. He was a past president of the American Physical Society and was a member of the American Philosophical Society, the Royal Academy, the Accademia Nazionale dei Lincei, the Royal Academy of Science and the Century Association. In the 1970s, he was a member of the U.S. General Advisory Committee on Arms Control and Disarmament.

Wheeler was awarded honorary degrees from 18 institutions, including from Princeton in 1986. In 2001, the University used a $3 million gift to establish a new professorship, the John Archibald Wheeler/Battelle Professorship in Physics, in honor of Wheeler's research and service.

Burial will be private at his family's gravesite in Benson, Vt. There will be a memorial service at 10 a.m. Monday, May 12, at the Princeton University Chapel. The family asks that gifts be made to Princeton University, the University of Texas-Austin for the John Archibald Wheeler Graduate Fellowship or to Johns Hopkins University.