Below right: These images collected by Princeton University scientists show (top) the first direct image of the dancing pattern of electrons on the edge of the bismuth-antimony bulk crystal, which is a quantum Hall insulator; (center) a schematic and another image showing the electron distribution in three dimensions; and (bottom) a schematic and an image conveying the distribution of edge-electrons in two dimensions.

A team of scientists from Princeton University has found that one of the most intriguing  phenomena in condensed-matter physics -- known as the quantum Hall effect -- can occur in nature in a way that no one has ever before seen.

Writing in the April 24 issue of Nature, the scientists report that they have recorded this exotic behavior of electrons in a bulk crystal of bismuth-antimony without any external magnetic field being present. The work, while significant in a fundamental way, also could lead to advances in new kinds of fast quantum or "spintronic" computing devices, of potential use in future electronic technologies, the authors said.

"We had the right tool and the right set of ideas," said Zahid Hasan, an assistant professor of physics who led the research and propelled X-ray photons at the surface of the crystal to find the effect. The team used a high-energy, accelerator-based technique called "synchrotron photo-electron spectroscopy."

And, Hasan added, "We had the right material."

The quantum Hall effect has only been seen previously in atomically thin layers of semiconductors in the presence of a very high applied magnetic field. In exploring new realms and subjecting materials to extreme conditions, the scientists are seeking to enrich the basis for understanding how electrons move.

Robert Cava, the Russell Wellman Moore Professor of Chemistry and a co-author on the paper, worked with members of his team to produce the crystal in his lab over many months of trial-and-error. "This is one of those wonderful examples in science of an intense, extended collaboration between scientists in different fields," said Cava, also chair of the Department of Chemistry.

"This remarkable experiment is a major home run for the Princeton team," said Phuan Ong, a Princeton professor of physics who was not involved in the research. Ong, who also serves as assistant director of the Princeton Center for Complex Materials, added that the experiment "will spark a worldwide scramble to understand the new states and a major program to manipulate them for new electronic applications." 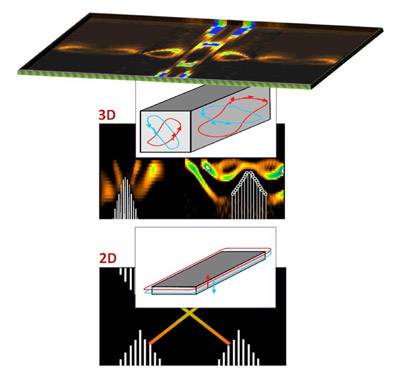 Electrons, which are electrically charged particles, behave in a magnetic field, as some scientists have put it, like a cloud of mosquitoes in a crosswind. In a material that conducts electricity, like copper, the magnetic "wind" pushes the electrons to the edges. An electrical voltage rises in the direction of this wind -- at right angles to the direction of the current flow. Edwin Hall discovered this unexpected phenomenon, which came to be known as the Hall effect, in 1879. The Hall effect has become a standard tool for assessing charge in electrical materials in physics labs worldwide.

In 1980, the German physicist Klaus von Klitzing studied the Hall effect with new tools. He enclosed the electrons in an atom-thin layer, and cooled them to near absolute zero in very powerful magnetic fields. With the electrons forced to move in a plane, the Hall effect, he found, changed in discrete steps, meaning that the voltage increased in chunks, rather than increasing bit by bit as it was expected to. Electrons, he found, act unpredictably when grouped together. His work won him the Nobel Prize in physics in 1985.

Daniel Tsui (now at Princeton) and Horst Stormer of Bell Laboratories did similar experiments, shortly after von Klitzing's. They used extremely pure semiconductor layers cooled to near absolute zero and subjected the material to the world's strongest magnet. In 1982, they suddenly saw something new. The electrons in the atom-thin layer seemed to "cooperate" and work together to form what scientists call a "quantum fluid," an extremely rare situation where electrons act identically, in lock-step, more like soup than as individually spinning units.

After a year of thinking, Robert Laughlin, now at Stanford University, devised a model that resembled a storm at sea in which the force of the magnetic wind and the electrons of this "quantum fluid" created new phenomena -- eddies and waves -- without being changed themselves. Simply put, he showed that the electrons in a powerful magnetic field condensed to form this quantum fluid related to the quantum fluids that occur in superconductivity and in liquid helium.

For their efforts, Tsui, Stormer and Laughlin won the Nobel Prize in physics in 1998.

Recently, theorist Charles Kane and his team at the University of Pennsylvania, building upon a model proposed by Duncan Haldane of Princeton, predicted that electrons should be able to form a Hall-like quantum fluid even in the absence of an externally applied magnetic field, in special materials where certain conditions of the electron orbit and the spinning direction are met. The electrons in these special materials are expected to generate their own internal magnetic field when they are traveling near the speed of light and are subject to the laws of relativity.

In search of that exotic electron behavior, Hasan's team decided to go beyond the conventional tools for measuring quantum Hall effects. They took the bulk three-dimensional crystal of bismuth-antimony, zapped it with ultra-fast X-ray photons and watched as the electrons jumped out. By fine-tuning the X-rays, they could directly take pictures of the dancing patterns of the electrons on the edges of the sample. The nature of the quantum Hall behavior in the bulk of the material was then identified by analyzing the unique dancing patterns observed on the surface of the material in their experiments.

Kane, the Penn theorist, views the Princeton work as extremely significant. "This experiment opens the door to a wide range of further studies," he said.

The images observed by the Princeton group provide the first direct evidence for quantum Hall-like behavior without external magnetic fields.

"What is exciting about this new method of looking at the quantum Hall-like behavior is that one can directly image the electrons on the edges of the sample, which was never done before," said Hasan. "This very direct look opens up a wide range of future possibilities for fundamental research opportunities into the quantum Hall behavior of matter."

Other researchers on the paper include graduate students David Hsieh, Andrew Lewis Wray, YuQi Xia and postdoctoral fellows Dong Qian and Yew San Hor. The team members are in the departments of physics and chemistry, and are members of the Princeton Center for Complex Materials. They used facilities at the Lawrence Berkeley Laboratory in Berkeley, Calif., and the University of Wisconsin's Synchrotron Radiation Center in Stoughton, Wis.

This work was supported by U.S. Department of Energy and the National Science Foundation.