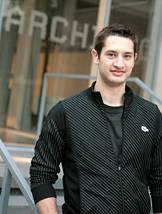 In his senior thesis and other projects in the School of Architecture, Jeff Mansfield has explored his interest in how architecture can influence social interactions that he calls "collisions."

Below left: Mansfield works on a project that examined the possibilities of collisions on an urban scale; for his thesis, he studied the evolution of minimalist modern architecture and how it can guide social exchanges.

Quintessentially Princeton In its commitment to helping students evolve as independent thinkers, the University requires them to complete a senior thesis — a unique opportunity to pursue original research and scholarship in close collaboration with a faculty member. Many senior thesis topics are driven by ideas from classes. Others reflect the pursuit of longheld intellectual passions. No matter the inspiration, for generations of students the senior thesis is often remembered as the defining experience of their Princeton educational careers. "I envisioned the thesis as an enlightening, eye-opening journey that would reflect the learning and growth of my years at Princeton," Krista Brune, a 2006 graduate, wrote in "The Thesis: Quintessentially Princeton" (.pdf), a guide that is distributed to incoming students, juniors and faculty members. The April 14, 2008, Princeton Weekly Bulletin profiles four students whose thesis projects represent the range of creative challenges that seniors can undertake in their independent work. Related articles:

From the April 14, 2008, Princeton Weekly Bulletin

Jeff Mansfield studies evolution and adaptability, but not in scientific terms. For the last year, the architecture major has been charting the path of modern architecture in the 20th century, as well as its future.

Starting with the influential architect Le Corbusier's Maison Dom-ino housing design in 1914, Mansfield tracks the minimalist modern buildings that created open space by stripping down structures to columns and slabs. Using a few contemporary examples, Mansfield argues in his senior thesis that as doorways and supporting walls are eliminated, columns provide the means for support and spatial definition, as well as more human interaction. While 70 percent of his thesis is a written argument, 30 percent consists of illustrations, overlays and collages that show how these elements function.

"Future avant-garde will become, paradoxically, increasingly primitive in the sense that only a column, slab and enclosing wall will be necessary," he said. "As a critical student of architecture, I am very interested in exploring this direction and hopefully making it a reality in my future work."

The arrangement of columns can close off some areas and open others, or direct movement in certain patterns, guiding interaction between users, Mansfield said. Mansfield, whose background includes many years of playing hockey, labels these social exchanges as "collisions."

"I am arguing that collisions create contact, and all contact is interaction, and interaction leads to business and relationships, however marginal they may seem," he said.

Mansfield is breaking new ground by reining in the modernist impulses of the last half-century that opened spaces excessively, said his adviser Ron Witte, a senior lecturer in architecture and co-founder of the Princeton-based WW architecture firm.

"What's interesting about what Jeff is doing is that rooms are still part of the necessity of contemporary life. Jeff's interest is not solely about opening this up continuously, but giving definition to architecture," Witte said.

Mansfield chose Witte as an adviser in part because Witte had edited a book on the Sendai Mediatheque in Japan, a building that features the column-slab elements discussed in Mansfield's thesis.

Last summer, Mansfield used a thesis research grant to visit the Sendai Mediatheque and test his theories. The structure, created by architect Toyo Ito and completed in 2000, is a visual arts and film facility that includes several galleries, a theater, a library and space for studios and programs. The Sendai Mediatheque aims to facilitate barrier-free communication among its users.

The visit gave him a more sensitive understanding of this social interaction, he said, and also raised the issue of privacy in spaces such as bedrooms or bathrooms. He then studied other architects who address the problem by placing private spaces within large columns or using a series of columns to create private spaces. Mansfield cites structures such as Philip Johnson's Glass House, completed in 1949 in New Canaan, Conn., and Shigeru Ban's Paper House, completed in 1995 in Yamanashi, Japan.

Witte said that while he has pointed Mansfield toward historical and contemporary examples, his advisee has been focused and self-directed from the start.

"He has a clear intellectual framework for what he's doing," Witte said. "It's an intellectual project and a design project. It makes his argument very effective."

While Mansfield's thesis arguments are clear, his postgraduation plans are still being formulated. The Arlington, Mass., native may play professional hockey (he played junior hockey, plays club hockey at Princeton and played for the gold medal-winning Deaflympics team in 2007) or enter the work force — either as an architect or an entrepreneur. Mansfield, who has been deaf since birth, runs a strength-and-conditioning business for deaf athletes. He hopes to have his own architectural firm, "though it will probably be a couple of decades from now," he said.

As for his last major undergraduate exercise, Mansfield said he has enjoyed the thesis experience.

"It has been incredible," he said. "It was the first time I could actually have the time to read what I wanted to. From that, I learned a lot and came to class and meetings with new understanding and new questions, which produced conversations that became increasingly exciting."