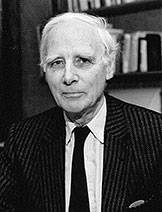 Alan Colquhoun, Princeton University professor emeritus of architecture and the Class of 1913 Lecturer in Architecture Emeritus, died at home of natural causes Dec. 13, in London. He was 91.

"Gentle and helpful to students, fearless in confronting what he considered affronts to sloppy thinking, and open at all times to debate and interdisciplinary discourse, Alan's presence anchored the Ph.D. program and encouraged students and faculty alike to widen their sphere of reference," Vidler said.

Colquhoun joined the Princeton faculty in 1981. In 1991, he transferred to emeritus status.

Before coming to Princeton, Colquhoun served as a visiting lecturer in the United States and abroad, including Harvard University, the University of Cambridge and L'Ecole Polytechnique Federale de Lausanne, among others. He opened an architecture firm, Colquhoun, Miller and Partners, in London in 1961, and in 1988 established a solo practice.

Born in Esher, England, on June 27, 1921, Colquhoun began his architectural training at the Edinburgh College of Art and earned a diploma from the Architectural Association School of Architecture (AA) in London in 1949, where he subsequently taught from 1957 to 1964.

Robert Maxwell, professor of architecture emeritus and dean of the School of Architecture from 1982 to 1989, forged a lifelong friendship with Colquhoun that began in 1946, halfway around the world. Colquhoun was Adjutant of Depot Battalion in the U.S. Army, stationed at Roorkee in northern India, and with the rank of captain, was "boss" of Lt. Maxwell, newly arrived from Bangalore.

They discovered a shared love of music. Maxwell said they often enjoyed listening to records, mostly of Mozart. "Later, when I was his boss at Princeton, we were still, above all, friends. I remember taking his class on the historical avant-garde, in 1987, and feeling envy that he was a full-time teacher, while I was lumbered with administration," Maxwell said.

Vidler remembered Colquhoun as a great colleague and mentor to students. "He inspired enormous respect and deep affection," he said. "His morning coffee-room chats were seminars in themselves. Meticulous to a fault — he abhorred split infinitives and punctuation mistakes in the press — he carefully nurtured his advisees towards completing their theses and continued to support them through their subsequent careers."

Eric Kuhne, a 1983 graduate alumnus and founding partner of the London-based firm Civic Arts, said he feels the effects of Colquhoun's teaching in every conversation that takes place in his firm's studio. From his former thesis adviser he learned "the search for form is as much a search for truth, and to find what no one else can see — the invisible — and be able to breathe life into it through design to show the world is our obligation as designers of cities. Alan's thoughts and care shall always be with my architecture."

Richard Cameron, a 1990 graduate alumnus and founder of Atelier & Company in Brooklyn, N.Y., remembered Colquhoun as "unfailingly kind and considerate while holding us all to his exacting and rigorous academic standards. He was the best kind of critic — tough and supportive. He was a superb educator."

Another of Colquhoun's students, Donald Rattner, earned his master's in architecture from Princeton in 1985. An architect and principal of the Studio for A.R.T. and Architecture in New York City, and founder of Module R, a design store in Brooklyn, Rattner said Colquhoun inspired him both at Princeton and throughout his career.

"During my studies at the School of Architecture I began to design projects using literal classical elements, which was generally frowned on for ideological reasons by nearly all professional programs then and now," Rattner said. "I remember very distinctly Professor Colquhoun, a scholar and practitioner of orthodox modernism, as among the few faculty members who was open-minded enough to respect what I was trying to do. His ability to see merit in both sides of an aesthetic argument helped lead to an evolution in my own thinking in the years since then."

British architect Edward Jones of the London-based firm Dixon Jones studied under Colquhoun at the AA and later joined him and Maxwell at Princeton as professor of architecture in 1989. "Probably rather to his surprise, Alan was lionized in America — when he began to speak at Princeton reviews, the room fell silent. He was the sharpest knife in the drawer and will be very much missed, here and there," Jones said.