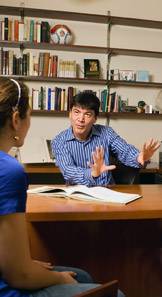 English professor Jeff Nunokawa — a gregarious and inspiring presence in the classroom — is relishing the role of master of Rockefeller College, which he assumed last year. Here, he meets in the master's office with sophomore Jane Dobkin.(Photo: Brian Wilson)

From the April 21, 2008, Princeton Weekly Bulletin

In 20 years as a professor at Princeton, Jeff Nunokawa has filled many roles, but students and colleagues agree he is ideally suited to his latest one: master of Rockefeller College.

"When Jeff was asked to be master, I thought, 'Of course!'" said James Richardson, professor of creative writing in the Lewis Center for the Arts and the Department of English. "He radiates enough social energy to power a small city, but more than that, it's his responsiveness and receptiveness. He is always listening to people."

Nunokawa, a professor of English who became master at Rockefeller last year, has a unique rapport with students. Gregarious, animated and accessible, he can be found in Rockefeller's dining hall several times a week, talking to students about everything from Martin Luther King Jr.'s most inspiring speeches to the latest CD from Coldplay.

"He's gone out of his way to welcome every student at Rockefeller as if it were his house," said Drew Adair, Rockefeller's director of student life. "It's obvious how much he loves getting out there and meeting students and engaging them."

Nunokawa especially relishes the serendipitous nature of being master, which provides him with many opportunities for casual conversations with students over a meal or at an event.

"What I can do is be an informal faculty presence and teach and learn in ways that are unchoreographed," he said. "I'm learning a lot from students that way."

Before he assumed the role of master, Nunokawa had served as a faculty liaison to students in several ways, as a faculty fellow and freshman adviser at Rockefeller from 1989 to 1994 and as a fellow at Wilson College from 1995 to 2007.

"Jeff seems to really enjoy the company of 20-year-olds, and he can constantly be found hanging around at the dining hall talking to students and really listening to what they have to say," said senior Carlos Arreche, who lives in Rockefeller. "He does an excellent job of including everyone in the conversation, even if he's never met them before."

"His lectures are very entertaining, but it's all a way of rendering interesting works that students might respect as 'great' but would find difficulty identifying with," said former student Ellen Charles, a 2006 graduate. "He'll compare the end of the movie 'Y Tu Mama Tambien' to a Henry James novel, and suddenly you'll have a new appreciation for both."

For Nunokawa, teaching has been the most rewarding endeavor of his life.

"I just can't bear not being in the classroom," said Nunokawa, who arrived at Princeton in 1988 as an instructor after completing his bachelor's degree at Yale University and his Ph.D. at Cornell University. "I love my graduate students. I adore teaching freshman seminars. There's no teaching I don't love."

Nunokawa is dynamic, surprising and funny in class. He likes to draw on current music because "for this generation, there is a sense that music is the truth."

"He has a genuine enthusiasm for anything and everything," said sophomore Jason Yun, who signed up for Nunokawa's freshman seminar "A Brief History of Individuality" by accident and called it "one of the happiest academic mistakes I've ever made. He is, without a doubt, the most hilarious, fun and caring professor I've ever met. I still have every single e-mail he sent saved on my computer, just because it reminds me how great academic experiences can get."

Nunokawa has taught courses on a myriad of literary subjects, from "War and the Asian American Imagination" to "Masterworks of European Literature" to "The Uses of Embarrassment: Social Discipline and Literary Form." 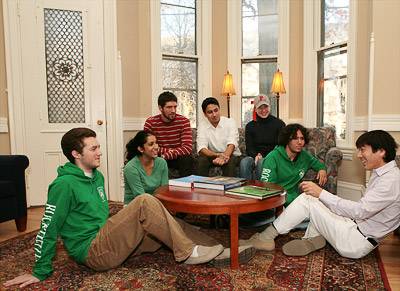 "Jeff's intellectual curiosities and passions are delightfully inspiring and infectious," said Daphne Brooks, an associate professor of English and African American studies. "As a colleague, he keeps us all on our toes, challenging us to stretch ourselves and to imagine new ways of parsing a text."

Outside of the classroom, Nunokawa has been an active participant in University affairs for years, serving as a member of the Council of the Princeton University Community and on its executive committee. And he often can be found giving informal lectures at various venues around campus, such as eating clubs and residential colleges.

"He has an incredible energy for personal interaction, and he cares so much for his students' happiness," Charles said. "He gets masses of e-mail from students, and it amazes me how much thought and time he puts into responding to them."

It was his lengthy e-mail messages to students that spurred him to create a page on Facebook, which has blossomed into a project of its own. Almost every day — and sometimes several times a day — Nunokawa posts short essays that explore topics as disparate as poet William Blake on forgiveness and singer Joni Mitchell on waiting for the phone to ring. "People ask, 'Why Facebook?'" Nunokawa said. "The answer is, I think you should go where people are."

He has now developed a following that reaches far beyond the University, an audience that he thinks of as people who "aren't fluent at the level of chapter and verse with, say, all of Thomas Hardy's minor works," Nunokawa said. His recent musings on the site discussed one of his favorite bits of dialogue in the film "All About Eve," analyzed Alfred Tennyson's poem "The Lady of Shalott" and quoted novelist D.H. Lawrence on economic despair.

"I work to make them accessible," he said. "I regard them as works of translation." His Facebook writing "enlivens and inspires and in some way guides" his scholarly writing.

Nunokawa's most recent books include "Tame Passions of Wilde: The Styles of Manageable Desire," a re-examination of Oscar Wilde, and "The Afterlife of Property: Domestic Security and the Victorian Novel," which looks at the diverse ways that the Victorian novel imagines women as property.

His current academic projects include a book called "Eros and Isolation: Getting Away From Others in 19th-Century Literature," which explores the causes and costs of mild acts of social withdrawal in Victorian novels. "I'm very interested in things below the radar," he said. "I'm talking about the husband or wife reading the newspaper at the breakfast table, or talking to the family pet or a child at a social engagement, as a way of relieving themselves from full-throttle engagement." It's a topic not without irony for Nunokawa, who admits that he rarely practices social withdrawal himself.

In fact, Nunokawa is more likely to be described as the consummate host. Since becoming master, Nunokawa has turned the master's residence, a house across the street from Rockefeller, into a regular venue for Friday afternoon teas, Monday night cooking classes, get-togethers for resident graduate students and dinners for the college's freshmen and sophomores.

"He takes the social aspect very seriously," said Oliver Avens, Rockefeller's dean. "His house is a semi-public place. There's generally a feeling, if you're looking for a space for an event, of asking, 'Why not have it at Jeff's house?'"