Three recent Princeton graduates took part this summer in a "young filmmakers" program in the School of Engineering and Applied Science.

The filmmakers, who majored in engineering as undergraduates, produced six short videos that were shown in a campus-wide screening in July and are in the process of being made available for viewing on the Internet.

Michael E. Wood created videos about the Center for Information Technology Policy and about a new technology that is assisting archaeologists who are reassembling ancient mosaics in Greece.

Taofik Kolade created videos about Women in Theory, a conference hosted by Princeton for women in the field of computer science theory, and about research in Kenya being done by civil and environmental engineering graduate student Trenton Franz.

Zennen Clifton created videos about the International Genetically Engineered Machines (iGEM) competition and about Kolade and Wood's senior thesis on their invention of a new type of videocamera stabilization device. 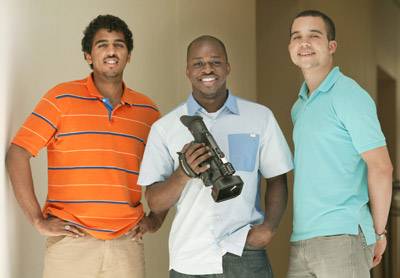 Wood, who earned a B.S. in mechanical and aerospace engineering in June, was a dancer and choreographer for DiSiac during his undergraduate career and in 2007-08 served as vice president of the Ivy Club. He and Kolade won the Enoch J. Durbin Prize for Engineering Innovation for their joint senior project on "Camera Stabilization With a Stewart Platform." Wood also received the George Bienkowski Memorial Prize for his contributions to the department. Last summer he interned with Spike Lee's production company, Forty Acres and a Mule. Originally from Brooklyn, Wood is pursuing an M.F.A. in film at New York University's Tisch School of the Arts.

Kolade, who earned a B.S. in mechanical and aerospace engineering in June, was a dancer and choreographer for the troupe Sympoh. He is co-winner of the Enoch J. Durbin Prize for Engineering Innovation. Last summer he interned at Davis Entertainment in Los Angeles. Originally from Washington, D.C., Kolade is pursuing a film career in Los Angeles.

Clifton, who earned a B.S. in computer science from Princeton in June, was a member of  the Black Arts Company as an undergraduate and performed in a number of plays. His most recent Princeton performance was "Top Dog Underdog," a two-man production. As an undergraduate, he worked as an editor and a cinematographer for a television show for Princeton TV called "Varsity." Last summer, Clifton interned at Davis Entertainment, an independent film production company in Los Angeles. Originally from St. Louis, he intends to pursue a film career in Los Angeles.

Mark Zondlo is up in the clouds