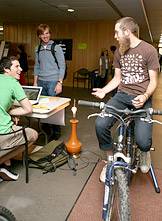 Senior Sean Gleason used pedal-power to light up a bulb in an effort to demonstrate sustainable transportation during the Sept. 17 sustainability open house in the Frist Campus Center. About 900 attended the event to learn about endeavors under way and planned for the future from "ambassadors" of administrative offices, student organizations and academic departments. Gleason is active in the U-Bikes organization, which rehabilitates abandoned bikes on campus and rents them to students. 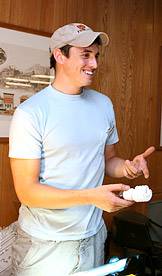 In one corridor, a faculty member was having an animated discussion on the future of the oil supply with two students. At a table, a Dining Services staff member was helping a local high school student with a project on recycling. Behind a bicycle that powered a light bulb, a student organization officer was signing up a new member.

The University's Sept. 17 open house offered more than the promised overview of the many sustainability efforts at the University. The five-hour event, titled "Sustainability: Introducing Princeton's Green Initiatives," engaged the crowd of about 900 in passionate discussions, informative how-tos and participatory next steps. 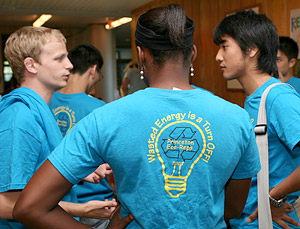 Members of the Eco-Reps student organization sported matching T-shirts with a sustainable slogan "Wasted Energy is a Turn-Off."

"It has a great atmosphere," said senior Mariesa Mason. "Everyone just seems to be very involved. It's exciting."

The event was a follow-up to the University's adoption earlier this year of a Sustainability Plan. The plan sets ambitious goals in the areas of greenhouse gas emissions reduction, resource conservation, and research, education and civic engagement.

The open house was intended to provide an opportunity to learn from University experts about sustainability efforts under way and planned for the future. Those attending spoke with "ambassadors" of administrative offices, student organizations and academic departments who staffed tables throughout the 100 level of the Frist Campus Center.

"I was delighted by the size of the crowd and the broad representation of community members, students, staff and faculty at the event," said Shana Weber, manager of the Office of Sustainability, which sponsored the event with funding from the High Meadows Foundation. "It was really exciting to see all of the connections being made.

"For example, a local teacher shared with me the list of things she was inspired and energized to do with her school because of the people she met at the event," she said. "I heard similar stories from many others, including students who were jazzed by interacting with each other and by planning future initiatives together. That is exactly the environment we were hoping to create. I think our effort to provide a venue to galvanize interest for the coming year was a success. Providing support, services and direction for all of that interest is going to be the next big administrative challenge." 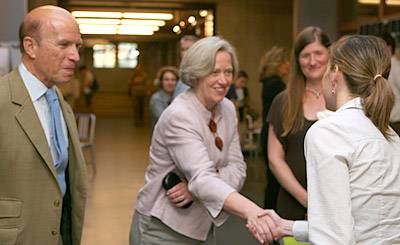 From left, University Trustee and High Meadows Foundation Co-Founder Carl Ferenbach and President Shirley M. Tilghman went on a tour of the open house with Shana Weber, manager of the Office of Sustainability. Tilghman greeted Andrea DeRose, who recently joined the staff as transportation demand management (TDM) manager in Transportation and Parking Services.

Mariesa Mason, sustainability chair at Cap and Gown eating club, was checking out the recyclable dinnerware at the table staffed by Sarah Bavuso, special events manager in Dining Services. "This seems to be right up my alley," Mason said.

Earlier, Bavuso had talked to a local high school student who was working on a recycling project and was curious about the plates.

Stephen Pacala, the Frederick D. Petrie Professor in Ecology and Evolutionary Biology and director of the Princeton Environmental Institute, was having a spirited discussion with two students.

"We were talking about oil and the future of the oil supply and how to break the monopoly pricing in the oil supply -- whether or not developing American oil reserves will reduce the supply and how much, and also if you decided to take the country off petroleum, how you would actually do it," he said. 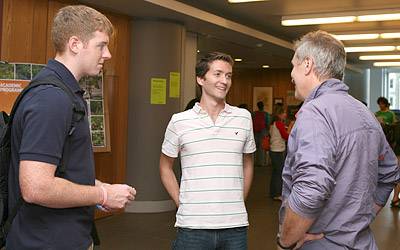 From left, junior Carter Simpson and senior Mark Smith talked with Professor Stephen Pacala about the future of the oil supply.

Carter Simpson, a junior economics major, said, "There were a couple of interesting ideas I had thought about: the need for a nationwide digital high-voltage power grid -- something to distribute the electricity from places you're producing it to all over the country without any loss; and some of the experimental electric cars [Pacala's] been driving that he's given rave reviews to."

Mark Smith, a senior majoring in ecology and evolutionary biology, had been drawn into the discussion and away from his work at two student organization tables: Greening Princeton and Food TASK. "I'm also very interested in the energy problem," he said. "I have some ideas about where our oil is going and what the importance of the domestic supply is and how that plays into mitigating some of the price concerns we've had recently."

Other student organizations represented included Engineers Without Borders, Eco-Reps, Environmental Justice and U-Bikes. The latter rehabilitates abandoned bikes on campus and then loans them to students. Senior Sean Gleason was staying busy signing up interested students in the group and keeping the pedal-powered light bulb lit. 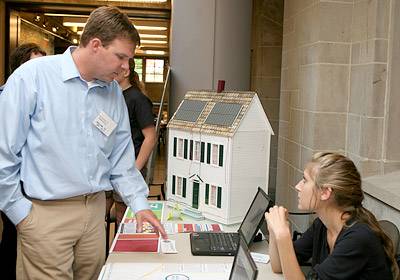 Kevin Long (left), a 2000 alumnus, and Jennifer Pazdon, a graduate student, staffed a table for the Department of Civil and Environmental Engineering about a course being offered in conjunction with a redevelopment project for Isles, a nonprofit organization in Trenton. Students will advise Isles on incorporating sustainable design elements into the project.

Kevin Long, who graduated in 2000 with a bachelor's degree in civil and environmental engineering, was using a PowerPoint presentation on a laptop to explain a course being offered by that department. The class is being taught by Robert Harris, a visiting lecturer who also is principal at the local firm ENVIRON International, where Long works.

Students in the course will help Isles, a nonprofit organization in Trenton, with a redevelopment project in which it hopes to use sustainable elements. The project involves the renovation of a large warehouse in Hamilton, N.J.

"One of the goals of the course is to try to expose the students to the reasons for, but more importantly how to design, various sustainable elements that could be a component to the redevelopment," Long said. "Bob Harris is going to work with these students almost as if they're their own consulting firm and Isles is their client, working to help Isles with these design elements." 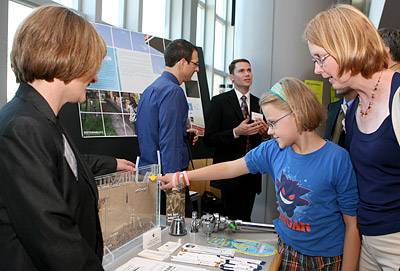 From left, Suzanne Chiavari of New Jersey American Water showed Jean Crider, assistant project manager in the Office of Design and Construction, and her daughter Christina a display on water conservation.

On another side of the room, facilities staff members Chad Klaus and Andrew Kane worked with Suzanne Chiavari of New Jersey American Water at a display about water conservation. At many of the areas covered specifically in the Sustainability Plan, posters were mounted outlining the goals and strategies, as well as information about current status.

"We've installed dual flush toilet valves in all the dormitories and are working our way through our academic and administrative buildings," said Klaus, assistant vice president for facilities/services, noting that the new technology enables the toilets to use less water to flush. "We've installed low-flow showerheads as well as new aerators on sinks in all the dormitories and are continuing in the rest of our housing. [The showerheads] save a gallon of water per minute.

Kane, director of housing, said that many people who stopped were eager to learn how they could apply the water-saving technologies at home. "Some of the students wanted to know how far we are with the dorms and different areas on campus where they hadn't seen these devices," he added. 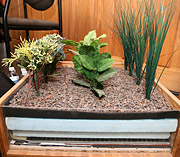 This display showed the elements that make up green roofs, which are scheduled to be installed on the new operations research and financial engineering building, half of the new Butler College and the chemistry building.

Eileen Zerba, director of the undergraduate laboratories at the Princeton Environmental Institute and a lecturer in ecology and evolutionary biology, said she had talked to people from the campus and community about the various research projects in which the institute is involved.

"We all ought to get together and really collaborate because we have similar interests or we have similar projects," she said. "A lot of these projects are going online, so they'll be accessible to the community at large. People want to see them once they get going, such as our green roof project and our Lake Carnegie project."

Executive Vice President Mark Burstein, whose office planned the open house, looked around Frist at one point and said, "It's wonderful to see various different parts of the community come together like this. There are faculty, students, staff and members of Princeton borough and township present. It's just great to have everyone here."

Alejandro Hernandez, a prospective student from Mexico who stopped by when he saw the crowd, said "We need to be more green, and there are some countries -- at least [in the area] where I'm from -- that are not into sustainability. We need to spread this message all over the world."