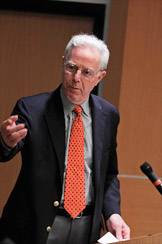 Professor Uwe Reinhardt, one of the nation's leading health care economists, is known for his blunt style and his ability to illuminate the riddles and complexities of the health care system. "He makes something that is very complicated understandable," said Toni DeMello, a graduate of the Woodrow Wilson School of Public and International Affairs.  (Photo: Sameer Khan)

Uwe Reinhardt is known for telling it like it is. Whether he's rebuking a Houston hospital for demanding upfront payments from a chemotherapy patient (in The Wall Street Journal) or ridiculing investment bankers for peddling repackaged "manure" (subprime mortgages) as secure investments (on the Financial Times website), Reinhardt doesn't mince words.

"Uwe is the premier health economist in the country, but most importantly, he is our conscience," said Stuart Altman, a professor of national health policy at Brandeis University and a leading expert on health care. "He doesn't hesitate to tell important groups and important individuals when he thinks they're not adhering to a high moral code."

In the four decades since he arrived at Princeton, Reinhardt, the James Madison Professor of Political Economy, has become one of the nation's leading authorities on the complex and costly morass of the U.S. health care system. And he has taught thousands of students how to think critically about finance, economics and economic policy by conveying complicated material with lectures that are witty, blunt and — most importantly — comprehensible.

Toni DeMello, who earned a master's degree from the Woodrow Wilson School of Public and International Affairs in 2008, said Reinhardt is masterful at explaining the riddles and complexities of the health care system.

"I'm Canadian, and I could never understand why Americans pay more per person and don't have universal health coverage — until I took his class," said DeMello of Reinhardt's course on "The Political Economy of Health Systems," co-taught with former U.S. Sen. Bill Frist, who was a visiting professor at Princeton last year. "He makes something that is very complicated understandable."

Reinhardt is quoted frequently in the media on everything from high drug prices to wasteful health care spending. A list of the book chapters, articles, editorials and book reviews he has written runs 17 pages. He also has testified more than 20 times before Congress, speaking on Medicare, physician compensation and the spiraling cost of health care. (Photo: Brian Wilson)

Reinhardt is an expert on corporation finance and economic theory as well as health care economics, a field in which he has become one of the definitive media sources. He is quoted frequently on everything from high drug prices to wasteful health care spending. A list of the book chapters, articles, editorials and book reviews he has written runs 17 pages. He has been invited to address hundreds of organizations, from the World Bank to the Clinton administration's health care reform transition team to the Hong Kong Hospital Authority. And he has testified more than 20 times before Congress, speaking on Medicare, physician compensation and the spiraling cost of health care, among other topics. Modern Healthcare magazine ranked him one of the 10 most powerful people in health care in 2002.

"He's a sought-after speaker on almost every major health care initiative going back to 1980," said John Rother, the director of legislation and public policy for AARP, the nonprofit organization for people 50 and over.

Reinhardt is especially known for his fervent advocacy of universal health care. He has pressed the issue as a moral imperative that Americans should meet, despite the staggering cost to the federal government, which he estimates at $120 billion a year.

"The question is: Are we willing to do that?" he said. "So far the country has always said no."

But Americans want it both ways, he pointed out.

"People say, 'Don't mandate health insurance — I should be free not to have it.' But if they are bleeding in the street, having hit a tree, they think they have a moral right to have somebody ... patch them up for nothing.

"The question is: What kind of country are we? Are we a nation composed of people who have a sense of shared social solidarity, where we are willing to sacrifice for one another, or are we just a group of people who happen to share a geography but it's basically everyone for himself?"

In 2006 Reinhardt was appointed by Gov. Jon Corzine to lead the New Jersey Commission on Rationalizing Health Care Resources, which was charged with examining what the state should do about financially troubled hospitals. Reinhardt's report candidly pointed out that several of New Jersey's 78 hospitals should be considered nonessential and shut down.

"He speaks his mind," said Christina Paxson, the Hughes-Rogers Professor of Economics and Public Affairs in the Wilson School. "He doesn't suffer nonsense gladly."

For example, last April he told The Wall Street Journal that the M.D. Anderson Cancer Center in Houston, which the newspaper said had a $1.9 billion endowment and a 2007 net income of $310 million, should not insist that patients pay tens of thousands of dollars upfront for treatments when the nonprofit hospital has "that much money in the till and that much profit." On the Financial Times website, he explained in March how the subprime mortgage crisis occurred, concluding that what Wall Street investment bankers did was "reckless and ill advised (in the vernacular, 'stupid.')"

But he often employs humor to get his point across. He titled an article in the Journal of Health Politics, Policy and Law "The Predictable Managed Care Kvetch on the Rocky Road from Adolescence to Adulthood." And he uses humor to great effect in the classroom.

"You laugh out loud in his lectures," said Ryan Salvatore, a member of the class of 2002 who took Reinhardt's accounting class. Reinhardt was especially good at using current events to illuminate the concepts he was teaching, Salvatore said. "He showed us how CEOs were using accounting measures to trick Wall Street. He editorializes, but in a way that's constructive."

"Humor is Uwe's trademark," Rother of AARP said. "He is unexcelled at pointing out some of the absurdities of the U.S. health care system. It's done with humor, which takes the edge off, but it's still very pointed and effective."

Reinhardt employed that approach last year in an appearance on "The Oprah Winfrey Show" with Michael Moore, the documentary filmmaker who examined the U.S. health care system in "Sicko." Reinhardt explained one of the flaws in the structure of managed health care this way: "Suppose I took you to Macy's, blindfolded you and pushed you through the door and said, 'Find yourself a nice blouse that fits you and make sure the price is right.' That's roughly how we buy health care. If you go to the hospital, what do you know about the prices? ... You don't have a clue."

"He is uniquely able to communicate not only with experts, but with people who are not experts," said Burton Malkiel, the Chemical Bank Chairman's Professor of Economics. The two met in 1968 when, as a first-year assistant professor, Reinhardt was assigned to be Malkiel's teaching assistant in a finance course.

Pioneer in the field

Reinhardt's path to Princeton was a circuitous one. Born in Osnabrück, Germany, Reinhardt ran away from the German army because "I didn't want to serve under generals who had served under Hitler," he said. He fled to Montreal, where he worked as a manifest clerk at a shipping company and parked cars at night until he had enough savings to pay for two years of college.

"I went to the Bank of Montreal and looked at the pamphlets to find the cheapest college, which was (the University of) Saskatchewan, and that's where I went," he said.

One of his professors talked him into going to graduate school at Yale University to study economics, he said, though he was more interested in buying a car and getting an apartment in Montreal. When it came time for him to write his doctoral dissertation, Reinhardt decided to study the concept of congestion pricing on the Connecticut Turnpike. His adviser thought that was a terrible idea and suggested he look into the nascent field of health care economics, Reinhardt recalled.

"There was always something fascinating in health care, and I got sucked in," Reinhardt said. There were perhaps a dozen scholars in the field in those days; today there are about 1,000 in the United States alone, he said.

When he joined the faculty at Princeton, right out of graduate school, "I immediately fell in love with teaching, so I never made it back to Canada," he said.

He has thoroughly enjoyed spending his career at Princeton.

"This is an unbelievable gift I've gotten, to end up at a great university like this, teaching young people and having the freedom to let my intellect roam," he said. "It's a wonderful way to spend your time."