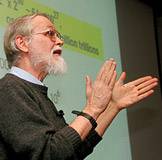 Computer scientist Brian Kernighan teaches a class in the School of Engineering and Applied Science on "Computers in Our World." As he explores the computers that pervade our lives, Kernighan draws on the latest advances in technology to help students understand how everything is connected. The course is just one example of the ways the school seeks to engage non-engineering students in its curriculum. Photo: Lorene Lavora 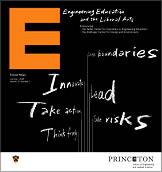 Engineering education and the liberal arts The most recent issue of EQuad News explores the connections between engineering education and the liberal arts. In his message at the beginning of the publication, H. Vincent Poor, dean of the School of Engineering and Applied Science, writes, "A defining — and extraordinary — quality of Princeton University is its ability to combine the best aspects of a liberal arts college with those of a major research university." A series of articles describes how the school embodies these connections. Links are provided here:

Comparative literature major Christina Lara enrolled in “Computers in Our World” during her senior year at Princeton after deciding that she needed to become an informed citizen of the 21st century.

“I really couldn't distinguish the difference between 'software' and 'hardware,' I had no idea what Java was (apart from an island in Indonesia) and I thought the Internet was a magic land of information floating somewhere out there,” she said.

Currently a Princeton in Latin America fellow working with teachers of rural schools in Mexico, Lara, who graduated in 2007, credits computer science professor Brian Kernighan's approach with opening her eyes to the world around her and making technology accessible, rather than formidable.

"The course was perfect for somebody like me, somebody who needs to really grasp the application of science in our lives," she said. "Professor Kernighan did a wonderful job easing us into technology, seamlessly presenting a real-life, real-time news article or current event at the beginning of almost every class."

As he explores the computers that pervade our lives — from laptops and cell phones to airplanes and medical equipment — Kernighan draws on the latest advances in technology, seeking to help students understand how everything is connected. MySpace and YouTube become perfect course fodder, as do the ongoing battles between students and the music industry over copyright violations.

"I want students to understand specific technologies, but the real goal is that they should be able to reason about how systems work and be intelligently skeptical about technology, so that when they're running the world in a few years, they'll do a good job," he said.

Kernighan himself has ample experience outside the classroom. After earning his Ph.D. from Princeton in 1969, he went to work at Bell Labs, where he was part of the group behind the Unix operating system and the programming language "C." 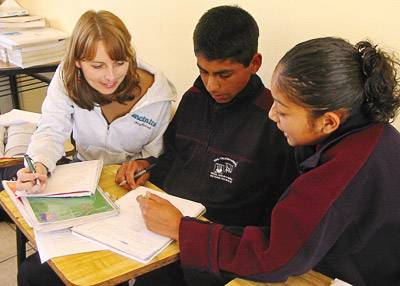 Christina Lara (left), a 2007 graduate, was a comparative literature major but is already drawing on the technical foundation from Kernighan’s course in her work with teachers in rural Mexico. (Photo: Courtesy of Christina Lara)

Elizabeth Linder, who graduated from Princeton in 2007 and majored in French and Italian, relies on the skills she gained in Kernighan's class in her current position on Google's Global Communications and Public Affairs team.

"I am at the crossroads between the mainstream, public perception of technology and the computer scientist/engineering understanding of our products," she said. "The ability to bridge these two worlds forms a pillar of Professor Kernighan's class — and is also a foundation of my everyday job."

The course had a similarly transformative effect on the career of 2003 graduate Jacob Glass.

Until taking "Computers in Our World," Glass was positive he'd major in molecular biology — he was interested in human genetics and had always thought of computers as a fun hobby, but nothing more. The course opened his eyes to the connections between his interests, and he is now a student in the Albert Einstein College of Medicine's M.D./Ph.D. program specializing in bioinformatics.

"I realized that computers didn't have to take a back seat to laboratory science — they could actually drive it in new and interesting directions," he said. "Professor Kernighan's uniquely creative lecture style and homework assignments made me re-evaluate my thoughts about computer science, and eventually major in the department."

Kernighan discusses ‘Millions, Billions, Zillions: Defending Yourself in a World of Too Many Numbers’