They are: Michael Cook, the Class of 1943 University Professor of Near Eastern Studies; Robert George, the McCormick Professor of Jurisprudence and professor of politics; Brian Kernighan, professor of computer science; and Celeste Nelson, associate professor of chemical and biological engineering. 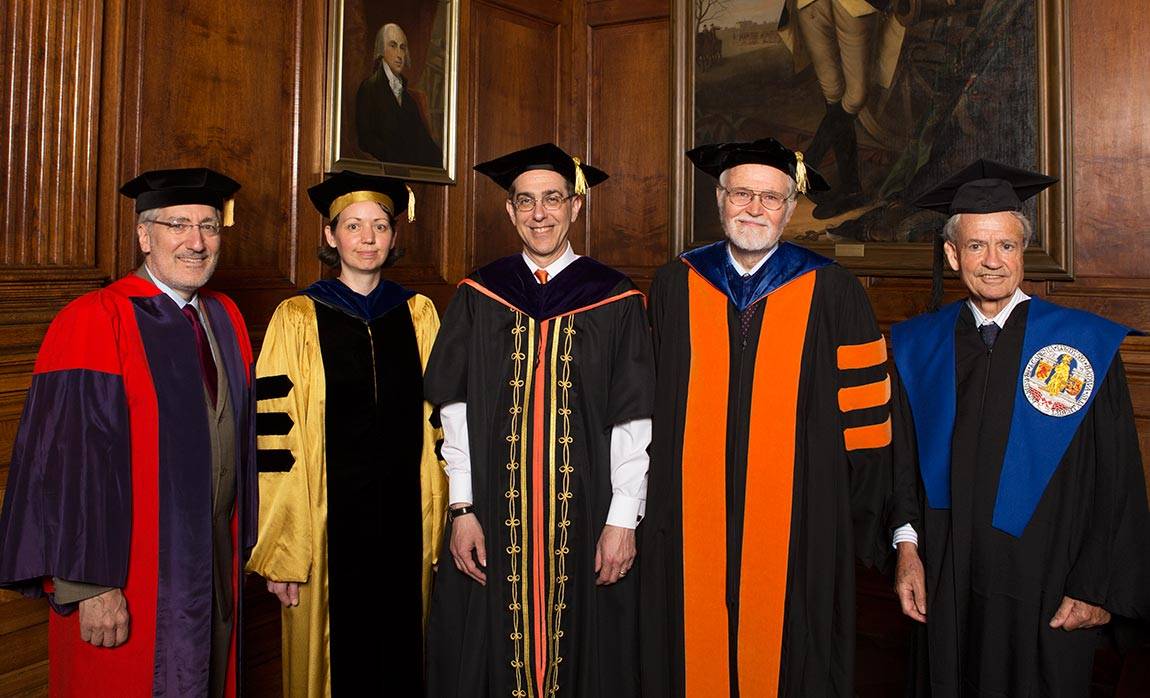 On Commencement Day, Princeton President Christopher L. Eisgruber (center) meets with the faculty members recognized with the President's Awards for Distinguished Teaching: (from left) Robert George, the McCormick Professor of Jurisprudence and professor of politics; Celeste Nelson, associate professor of chemical and biological engineering; Brian Kernighan, professor of computer science; and Michael Cook, the Class of 1943 University Professor of Near Eastern Studies. (Photo by Denise Applewhite, Office of Communications)

Cook, a faculty member since 1986, is a highly regarded Islamicist who has made major contributions to the intellectual history of the medieval Islamic world.

A faculty member noted that Cook's "ability to make complex developments and ideas accessible to people of varied backgrounds" are what help to make Cook "one of the University's most cherished teachers."

Cook has helped launch the careers of numerous graduate students in the field who are working at universities around the world. Many of them describe as "legendary" Cook's seminar "Introduction to the Islamic Scholarly Tradition."

One student, now a professor himself, had studied with Cook as a Princeton undergraduate and returned for graduate study, prompted by students in other programs who said that seminar should not be missed. He said: "We regularly spent 30-40 hours a week solving the historical and linguistic puzzles that he created in this obstacle-course of a class. We did so to impress him, of course, but also because we knew that he was working at least as hard as we were."

Undergraduate students also underscored Cook's commitment to teaching. One former student commented on his "mastery of subject, his charisma as a storyteller, and his academic and personal investment in his work, [all of which] were apparent right away."

George, who has served on the faculty since 1985, is a widely known legal philosopher and constitutional scholar. He also is director of the James Madison Program in American Ideals and Institutions.

A colleague highlighted the impact George has had on "generations of Princeton students" who have "fond recollections [of] his now famous courses in "Constitutional Interpretation" and "Civil Liberties," which "remain among the largest and most popular in the politics department."

A recent alumnus described how "Civil Liberties" "confronts some of the deepest and most controversial questions of public morality and civic life," and how "Constitutional Interpretation" "wrestles with intractable debates about the foundations and nuances of constitutional doctrine."

A former student who worked with George as an undergraduate and a Ph.D. candidate, said: "On a range of topics, he challenges my thinking profoundly. We have discussed everything from politics to philosophy to religion to science — everything under the sun. Moreover, he discusses these subjects always with an eye not to convince but to instruct. We certainly disagree sometimes, but I know that I am not off the hook unless my ideas are well grounded."

Kernighan, who joined Princeton's computer science faculty in 2000, holds a Ph.D. in electrical engineering from the University. Kernighan is known for his ability to make complicated subjects understandable for students as well as professionals in computer science. He also is highly regarded as a mentor.

A colleague described the breadth of Kernighan's support of students: "Professor Brian Kernighan has distinguished himself as a master educator through his classroom teaching, his independent work advising, his academic advising, his mentoring and his outreach to the community of Princeton students. A legend in the computing field long before his arrival at Princeton, Brian leaves an indelible mark on every student he advises, teaches and mentors."

"Learning how to program from Brian Kernighan is like learning physics from Albert Einstein or calculus from Isaac Newton," one undergraduate said.

A graduate student who served as a teaching assistant to Kernighan said the experience informed her career goal to become a "teaching professor." "Professor Kernighan was one of the first people to help me recognize my enjoyment for teaching computer science," she said. "I can honestly say that being a teaching assistant for Professor Kernighan was the most influential and rewarding experience of my graduate career at Princeton."

Nelson, a faculty member since 2007, focuses on bioengineering and materials synthesis, including how organs such as the lungs develop. She is director of the Program in Engineering Biology.

Colleagues underscore Nelson's talent in teaching students across the undergraduate years, and in developing innovative learning experiences. Two of the courses she created, "Quantitative Physiology and Tissue Design" and "Physical Basis of Human Disease," bring new opportunities for undergraduates to study biomedical engineering at Princeton, and enrollments attest to their appeal.

A colleague highlighted Nelson's ability to make connections across disciplines, such as through the course "Quantitative Principles in Cell and Molecular Biology," which Nelson was invited to teach by the molecular biology department. "It shows that Celeste is a key player in the cross-fertilizing disciplines and bridging the life sciences and engineering," he noted. He remarked that an unforgettable part of the course was that Nelson "brought in various organs from the local butcher in Trenton to demonstrate the physiology of various organs. It was a tour-de-force on both the technical level and at the pedagogical level."

Stated a recent alumnus, "As students, we thrived under her expert and thoughtful teaching, especially through hands-on experiments and a historical as well as critical framework to understand the context of tackling human disease."

Nelson's teaching also is an example to graduate students. "Professor Nelson approached all the courses she teaches with great care and dedication," said one Ph.D. candidate. "Following her example, I myself have strived to be a better teacher and mentor throughout my time at Princeton."