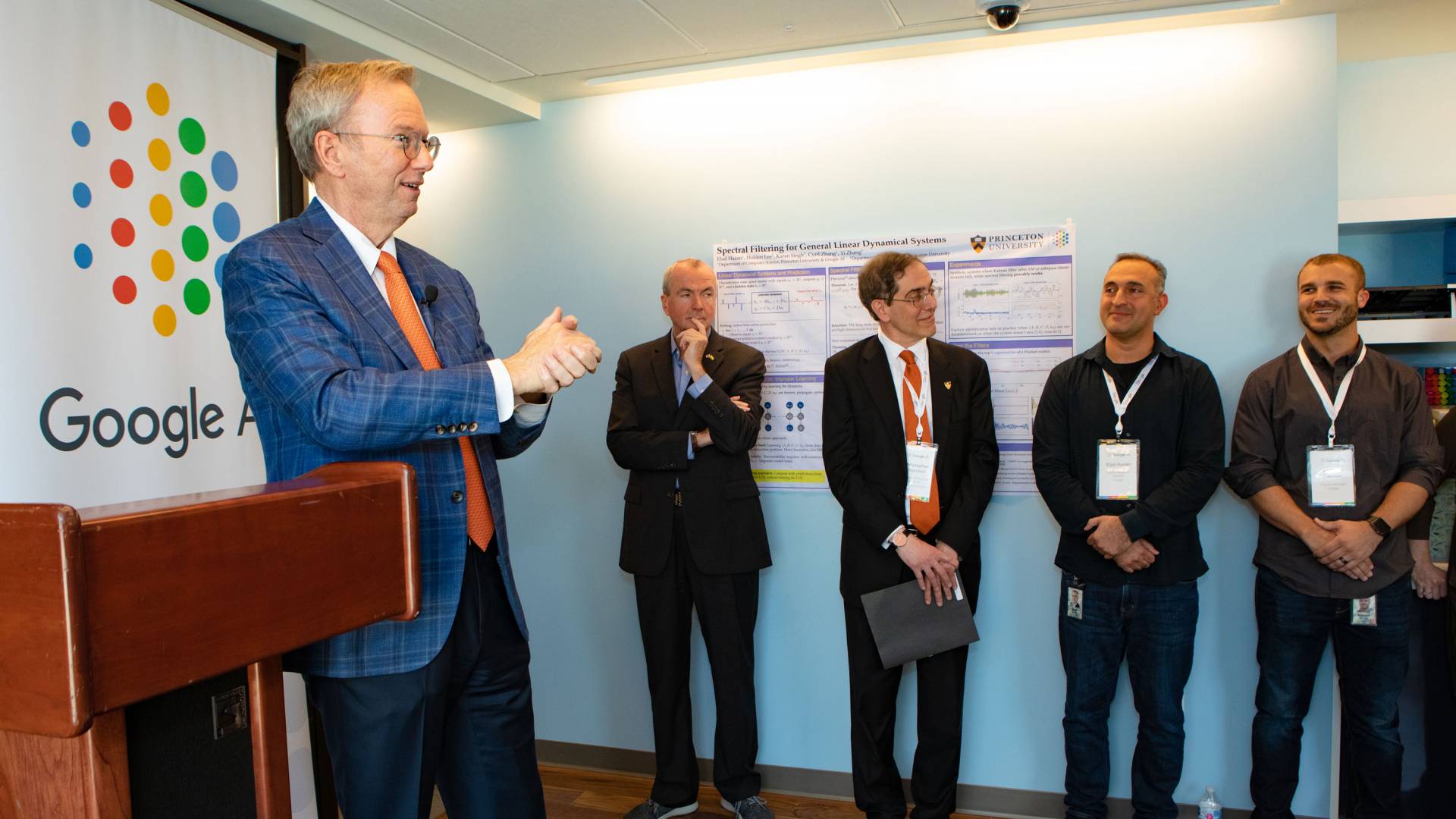 Google’s newest AI lab — located across the street from Princeton University’s Nassau Hall — officially launched on Thursday, May 2, with speeches and research presentations by state and local officials, Google executives, and University executives and students.

The lab, at 1 Palmer Square, is already playing a vital role in expanding New Jersey’s innovation ecosystem, as evidenced by the projects shared by Princeton University undergraduate and graduate students who have been working in the research lab and by the commitment to further expansion voiced by state governmental leaders.

“We are thrilled that Google is in Princeton,” said President Christopher L. Eisgruber. “By bringing together talented researchers from Princeton and Google, and by giving them access to Google’s exceptional computing resources, this collaboration promises to deepen our understanding of machine learning and produce exciting innovations.

“In this unique confluence of intellectual excellence and cross-sector collaboration, we see tremendous potential — the potential to discover breakthroughs that make a difference for all of us,” he said. “In the years ahead, artificial intelligence and machine learning will undoubtedly yield new discoveries in genomics, neuroscience, chemistry, psychology, sociology and a dazzling variety of other fields.”

Naman Agarwal, a 2018 graduate alumnus who now works for Google, shares his research with Eisgruber.

New Jersey Gov. Phil Murphy spoke about the long track record of innovators in New Jersey, including Alexander Graham Bell, Thomas Edison and Alan Turing (a 1938 Princeton graduate alumnus) and the many Nobel laureates who made the state’s Bell Labs the computing powerhouse of the mid-20th century.

“As Princeton builds on its extraordinary legacy, and now increasingly partners with the likes of extraordinary organizations like Google, we in the state of New Jersey are meeting on that common ground [of innovation],” Murphy said. He announced a new Innovation and Research Fellowship Program for New Jersey residents and students. “These grants are just one way in which we will reclaim New Jersey’s historic place as the true home of innovation and invention,” he said.

Eric Schmidt of the Class of 1976, former chairman and executive CEO of Google, said that his goal in creating the Google AI Princeton team was to re-create the magic of Bell Labs — bringing together Princeton students and faculty with the most powerful computers on the planet. “The math here gets better with scale,” he said. 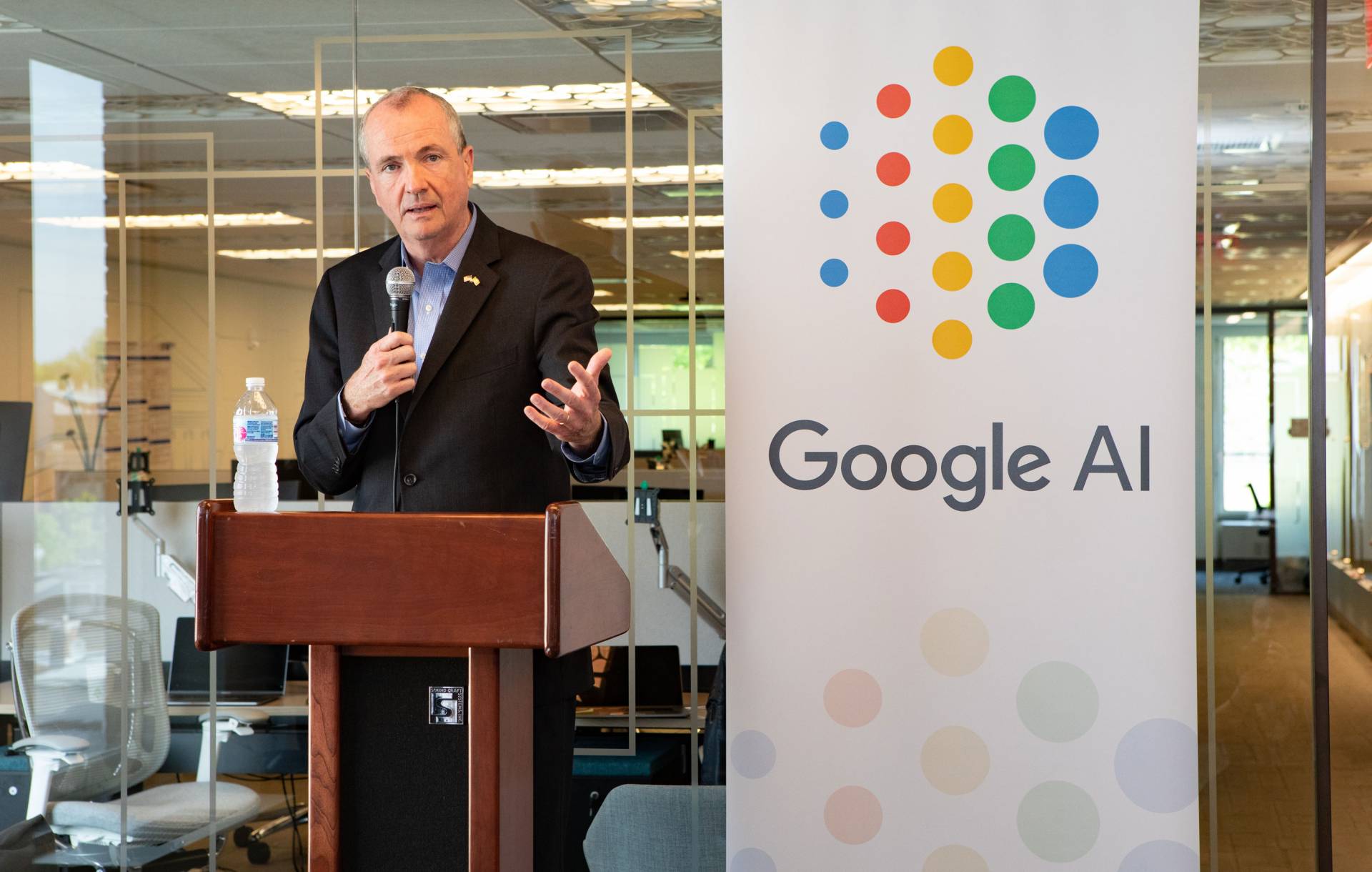 Gov. Murphy talks about innovation as a driver of the New Jersey economy.

Schmidt reminisced about taking classes with Professor Brian Kernighan, who continues to teach computer science to Princeton undergraduates, and driving with then-Princeton professor Jeffrey Ullman to Bell Labs “because that’s where I had to go to get access to the most extraordinary things. But the magic of Princeton was that, as a very, very young person, working with Jeff — who I had to call Professor Ullman at the time — and the folks at Bell Labs, I was able, at the age of 20, to write a piece of code that is still in use at Google. Which is a little disturbing. But I always kept that in the back of my mind. …

“I still remember Jeff Ullman, the car, Brian, the labs, and I thought, wouldn’t it be good if we could replicate that?” he said. “So the formula can be understood as: Take the smart people who exist across the street, combine them with the leadership here, merge them together into a team using [Google’s] entire 100,000 people, $100 billion of revenue — all that cash, all those data centers — data centers the size of football fields — that these people are using at their desks.”

Achieving that vision “is a very big deal for me personally and for the nation,” Schmidt said. 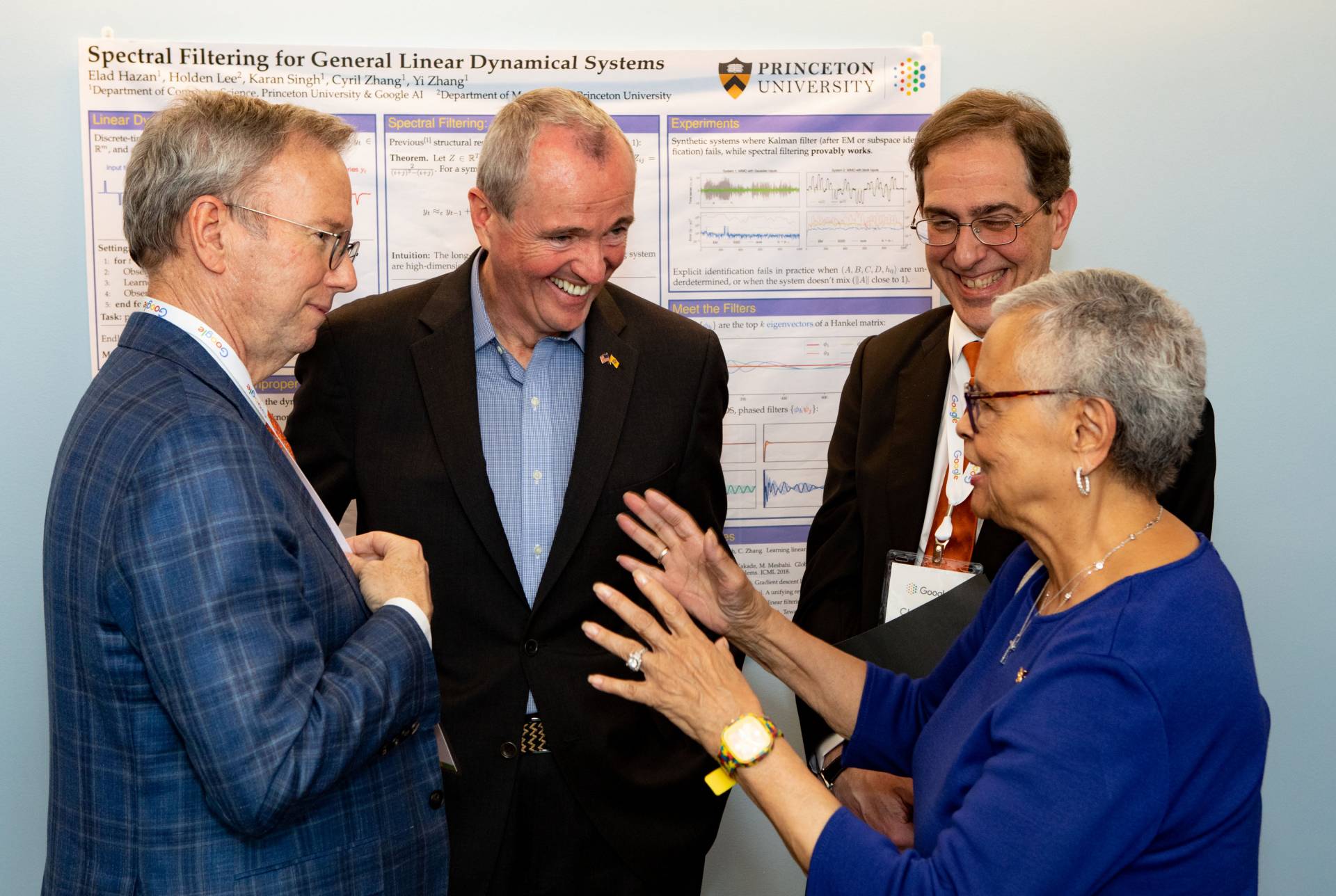 From left: Schmidt, Murphy, Eisgruber and Rep. Bonnie Watson Coleman speak together in front of a research poster.

The Google AI Princeton team is led by Yoram Singer and Elad Hazan, both professors of computer science at Princeton. “While Princeton is small, it has managed to have a huge impact, due to careful scientific work building on the foundations” laid by Princetonians like Turing, visiting faculty member John von Neumann, and Nobel laureate John Nash, said Hazan. “Yoram and my vision for the lab is exactly that, to build upon these foundations,” he said. “We’re really excited about a way forward.”

Congresswoman Bonnie Watson Coleman expanded on that theme. “New Jersey is zooming into the 22nd century,” said Watson Coleman. “We are trying to learn and to apply knowledge, to create and be innovative — to make our world better.”

After the formal remarks, students who have used Google’s resources in their research presented posters detailing their work. 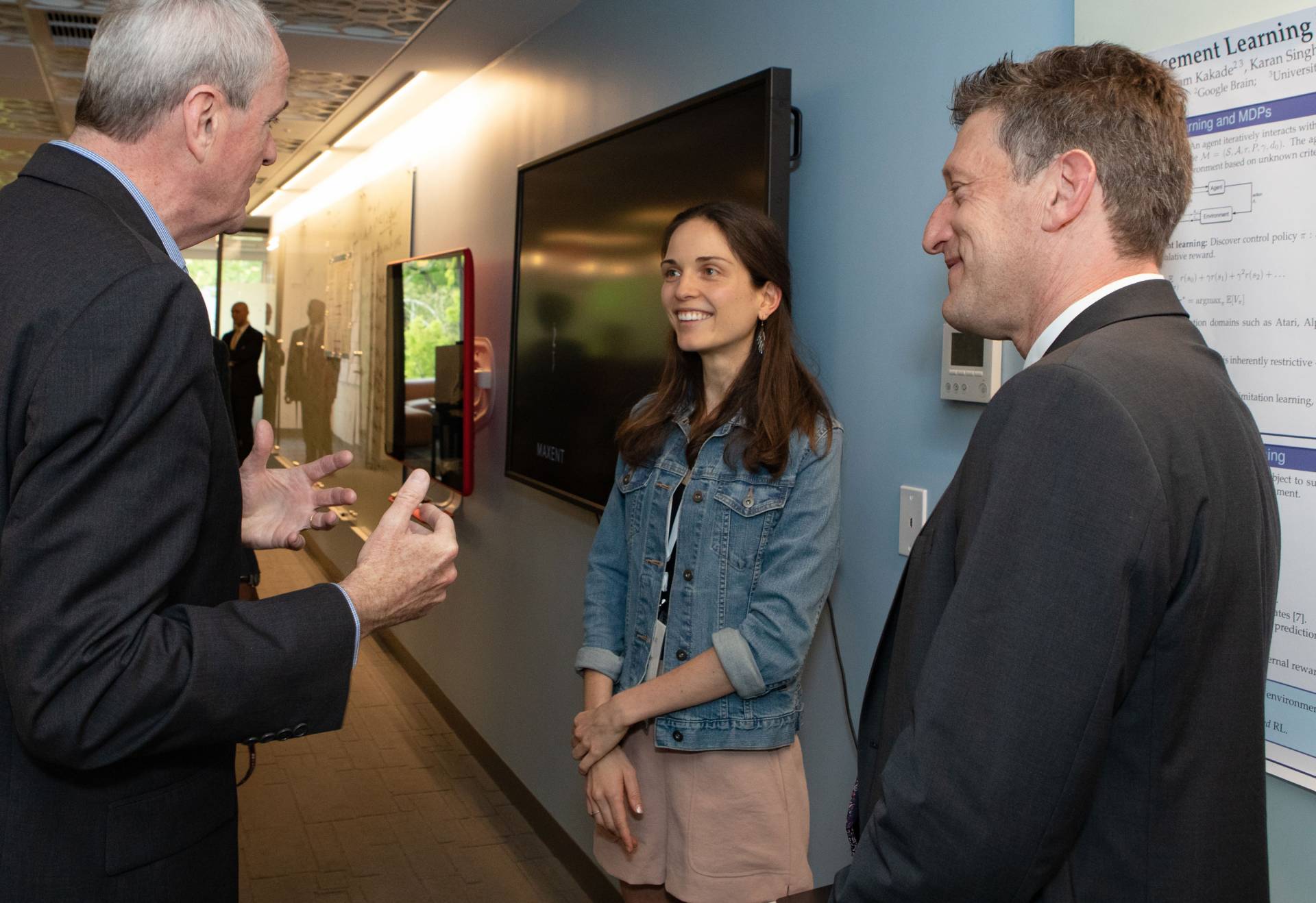 Abby Van Soest, a senior computer science major, presented her thesis research on reinforcement learning without rewards. “We want to discover methods that encourage learners to explore their world and their capabilities based only on the experience they collect in the environment, free from the limitations of rewards,” said Van Soest, who plans to move to California to work for Google after graduating on June 4. She had a software engineering internship with Google in New York City last summer and has been a part-time research intern with the Google AI Princeton team this semester.

“As an undergrad, I think the educational experience for undergraduate students who work in the lab is unparalleled,” she said.

Other research presenters included Naman Agarwal, a 2018 graduate alumnus who now works for Google; Xinyi Chen, a member of the Class of 2017 who will be coming back to Princeton as a graduate student in September; and graduate students Brian Bullins, Karan Singh, Cyril Zhang and Yi Zhang. “Maybe one of them can be the next Eric Schmidt,” said Hazan.

“It is tremendously exciting,” said Jennifer Rexford, who chairs the computer science department and is Princeton’s Gordon Y.S. Wu Professor in Engineering. “The confluence of brilliant people and great resources for computation and storage, it’s a perfect storm for a lot of great discoveries.” Listen to a "She Roars" podcast with Rexford.