A group of Princeton engineering students is reimagining a 19th-century textile factory as a modern, energy-efficient headquarters for a Trenton nonprofit. Their goal: Save money; save the planet.

As part of a class taught by Robert Harris, the co-founder of the New Jersey-based environmental consulting firm Environ International, a dozen students are helping to renovate the decrepit factory by looking for ways to reduce the building's use of water, electricity and fossil fuels.

Harris teaches the students to apply a holistic approach to efficiency and environmental sustainability by asking them to evaluate a wide range of measures, such as harvesting rainwater, exchanging energy with the ground to heat and cool a building, and installing rooftop solar panels and green roofs. In the process, they learn rare skills likely to be in high demand in coming years.

"We're not going to deal with global warming adequately if we don't deal with energy use in commercial and residential buildings," said Harris, a visiting lecturer in civil and environmental engineering. "The science and the field are expanding rapidly, and we want to introduce the students to the synergism that exists between building design components."

Buildings account for 40 percent of energy consumption in the United States at an annual cost of $418 billion, according to the U.S. Energy Information Administration, a statistical agency of the Department of Energy. The agency estimates that buildings produce 39 percent of greenhouse gas emissions in the United States, surpassing the transportation industry and the manufacturing sector.

The Princeton students are focused on the future headquarters of Isles, a community development and environmental organization that seeks to "foster self-reliant families in healthy, sustainable communities" in Trenton. Isles develops green homes, micro-businesses, community gardens and environmental cleanup projects, and operates an alternative high school and a job training center. Its most recent training services include "green-collar" job training, energy-efficient building retrofitting and energy education.

Founded by a group of Princeton students in 1981 under the leadership of Martin Johnson, who was a senior at the time, Isles has grown to employ 60 staff members in five locations in central New Jersey. The former factory in Hamilton was partially donated to Isles, allowing Isles to consolidate its headquarters, school, training center and community research center by 2010. The building dates to 1895, but additions were added in 1900 and 1912. 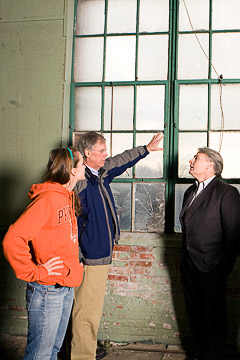 From left, Weissinger and Harris discuss with Johnson the advantages of installing double-paned windows with energy-efficient glazes. (Photo: Brian Wilson)

After the renovation is complete, the building will house around 300 employees of Isles and other nonprofits and will include a teaching café that Isles will use to train culinary workers. It also will house New Jersey's first state-funded "green-collar" job training center. Isles plans to convert other portions of the building into artist studios and mixed-income condominiums.

The spacious brick factory, which had been abandoned for 20 years when Isles purchased it, offers the organization room to continue growing, but the building needs a complete modernizing makeover. As part of a series of courses called Engineering Projects in Community Service, Princeton students are restoring the building's 110-year-old tower clock and looking for ways to make the building more environmentally friendly -- which is where Harris' students come in.

In late October, several of the students, all civil and environmental engineering majors, presented their suggestions for reducing the energy use and environmental footprint of the future Isles headquarters. In a conference room at Isles' current offices, they presented their findings to Isles officials and Randy Croxton, the principal of Croxton Collaborative Architects, the firm contracted by Isles to remodel the old factory.

As part of their class, titled "Sustainable Building Design," the students analyzed the components of the building that will play a role in the structure's environmental impact, such as insulation, water usage and drainage, and the heating, ventilation and air conditioning (HVAC) system.

To help Isles reduce costs and harm to the environment, the students created a computer model of the building with a Web-based program called Green Building Studio. They used it to generate an overall assessment of how the building will consume energy and which modifications would be most effective at saving energy and water.

Senior Nate Angell said the best ways to reduce water usage would be to install a rainwater harvesting system that captures roof runoff and to install low-flow toilets, urinals and sinks. If Isles implemented all of the measures the students suggested, Angell estimated it would conserve as much as 1.5 million gallons of water per year. 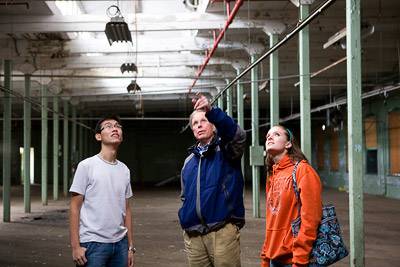 Harris (center) points out some of the areas for improvement to Hui and Weissinger, including incorporating innovative lighting strategies. (Photo: Brian Wilson)

Lights are another major energy hog, accounting for 28 percent of electricity usage in commercial buildings, according to the students' assessment. Emily Roche, a second-year graduate student taking Harris' class, explained how incorporating innovative lighting strategies could dramatically reduce Isles' electricity bills. Installing skylights, for instance, would generate 4 to 6 percent savings -- although the savings in lighting usage would be offset by loss of heat in winter.

Her other suggestions included using fewer (but well-placed) indoor lights, installing double-paned windows with energy-efficient glazes, and utilizing occupancy and natural-light sensors that turn off or dim a room's lights when they aren't needed.

The students also presented renewable energy options. Senior Eric Hui estimated that installing solar panels on the roof would cost about $500,000, which would take 17 years to recoup in energy savings. It was worth the investment, he said, since the panels would capture clean energy from the sun, reducing Isles' reliance on fuels that release greenhouse gases into the atmosphere.

Hui said another possibility was to install a new kind of heating and cooling system known as a ground-source heat pump. Unlike traditional heat pumps, which rely on outside air temperatures to control indoor air temperatures, ground-source systems use the Earth as a place to gather or deposit heat. The systems work by cycling water through underground pipes, then back into the heat pump, which exchanges heat between the water and the building. The University already uses one of these systems for the Lawrence Apartments, which are heated and cooled by a system of pipes that runs under the nearby golf course.

Hui estimated that if Isles incorporated all of the students' suggestions into their building design, they would see about a 40 percent savings in energy costs. The combination of the solar panels and the ground-source heat pump should make the building carbon neutral, meaning it would produce no net emission of the greenhouse gas carbon dioxide.

After the presentation, Johnson stressed that the students' work is very important. "This project will demonstrate the potential for saving more of these beautiful old factory buildings, making them profitable as fun places to live, work and learn -- and saving the planet at the same time. I wish Princeton had courses like this when I was a student," he said.

The day after the students' presentation, New Jersey Gov. Jon Corzine released a new state energy master plan, which calls for making energy-saving improvements to the more than 300,000 state buildings each year between now and 2020. 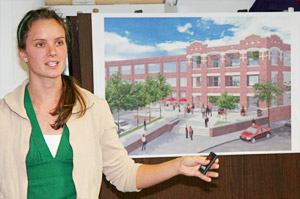 Weissinger explains how her class evaluated the building's environmental footprint during a presentation to officials from Isles and the firm contracted to remodel the factory. (Photo: Chris Emery)

"By embracing new approaches to energy, we are providing the pathway to both economic prosperity and environmental protection," Corzine said at a press conference held at Isles.

Corzine estimated the energy plan would create 20,000 new jobs focused on sustainability and renewable energy by 2020, and he praised Isles for bringing urban training and economic development strategies to the task of greening the planet.

Johnson said the project will bring the best technologies to a place that needs it most -- urban working-class neighborhoods. "With so many inefficient buildings, cities are the last real frontier in terms of energy savings. We need to find cheap ways to keep old urban buildings out of landfills and make them energy-efficient and healthy."

Over the latter part of the semester, the Princeton students have moved more deeply into the renovation process by designing a green roof and ground-source heat pump for the building. They also have been assessing how low levels of groundwater contamination under the building -- a common problem in the city -- might affect the health of those inside the building and what kind of ventilation system will be needed to prevent ill effects.

"Some of their work will probably be very influential in the building's final design," Harris said. "The class has real deadlines, we are making presentations, and they do a lot of writing -- which is an environmental consultant's primary product in these projects. We're trying to give them as close to a real-world experience of design as possible. The only way it could be any closer is if we were contracted by a client for the design."