Pierre Vimont, ambassador of France to the United States, awarded Brombert with the highest decoration of France. It was created by Napoleon in 1802 and is given for gallantry in military action or distinguished service in military or civilian life for work that enhances the reputation of France through scholarship, arts, sciences or politics. 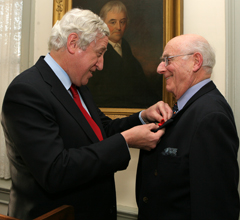 Brombert, the Henry Putnam University Professor of Romance Languages and Literatures and Comparative Literature Emeritus, joined the Princeton faculty in 1975 and transferred to emeritus status in 1999. He previously taught for 24 years at Yale University, where he earned his bachelor's and doctoral degrees. He is a specialist in French and comparative literature of the 19th and 20th centuries.

Born in Germany and raised in Paris, Brombert was the only child of Russian-Jewish émigrés. The family fled Paris in 1940 during the German occupation of France and came to America via Spain.

In a letter to Brombert, Vimont wrote, "The award testifies to the president of the French republic's high esteem for your merit and accomplishments. In particular, it is a sign of France's true and unforgettable gratitude and appreciation for your personal, precious contribution to the United States' decisive role in the liberation of our country during World War II. The French people will never forget your courage and your devotion to the great cause of freedom."

Brombert also was recognized for his service to French culture in the United States through his many years of teaching.