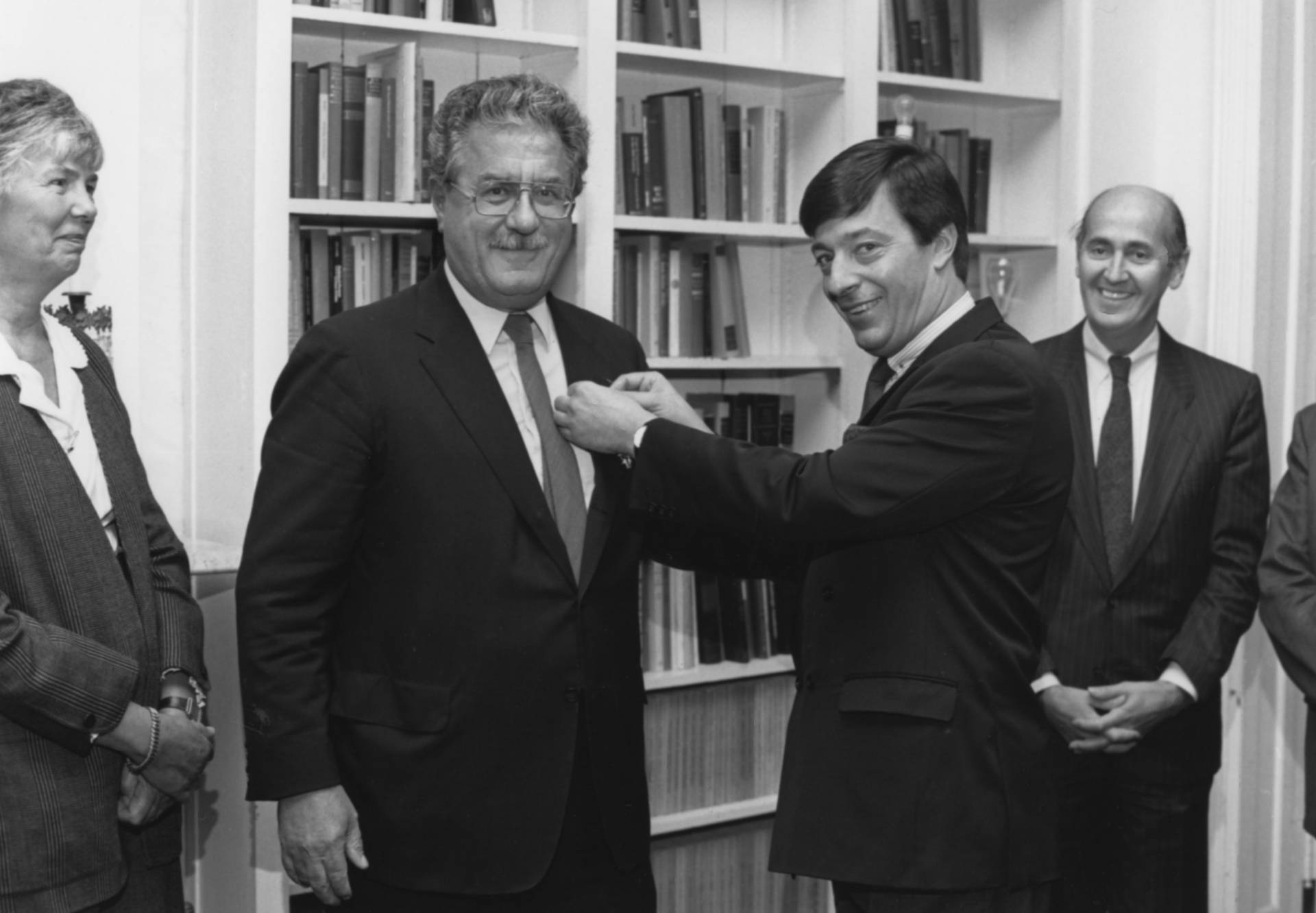 André Maman (left), is presented with the decoration of officer of the Legion d'Honneur by French Secretary of State for Foreign Affairs, Didier Bariani, in October 1987. Looking on are Marie Maman and the French consul general in New York, André Gadeaud.

André Maman, professor of Romance languages and literatures, emeritus, and a "deeply beloved" advocate of French culture and civilization for generations of Princeton students, died April 13 at his home in Princeton, New Jersey. He was 90.

Maman joined Princeton’s faculty in 1958 as an assistant professor. He served as assistant dean of the college from 1968 to 1971. In 1976, he was promoted to professor. That year, he also organized and directed the first alumni college to be held abroad, in Rouen. In 1991, Maman was one of the first four recipients of a new award at the University — the President's Award for Distinguished Teaching. He transferred to emeritus status in 1993. The Department of French and Italian annually awards the André Maman Senior Thesis Prize for an outstanding thesis on the culture, economy, history, politics or society of France.

In 1992, Maman was elected to serve a nine-year term as a senator of France, representing French citizens who live outside France — but maintained a close relationship with the University, creating internships for Princeton students in the French Senate, hosting alumni in Paris, speaking at alumni events and more.

"André Maman was deeply beloved by the many hundreds of students who took his courses in French language and civilization," said Thomas Trezise, professor of French and Italian and department chair. "He was also a cherished colleague, especially supportive of junior faculty. I’ll never forget his glowing smile when news arrived of his election to the French Senate. He’ll be sorely missed at Princeton."

When Maman completed his term as senator, he remained active in promoting French culture throughout the world, dividing his time between Princeton and Paris.

In 1987 he was named an officer of the Legion d'Honneur and promoted to Commandeur (the highest level) in 2003 by the government of France in recognition of his services as a teacher of French culture and civilization in the United States. For his contributions to the teaching of French language and civilization, he was named an officer in the Ordre des Palmes Academiques.

Maman was born in Oran, Algeria, on June 9, 1927. He was educated at the University of Toulouse and the Sorbonne in Paris. He practiced as a lawyer in France and taught in Norway and Canada before coming to Princeton.

"To generations of Princetonians, Maman was the incarnation of France," said François Rigolot, the Meredith Howland Pyne Professor of French Literature, Emeritus. "His courses on French politics and culture were always described as a fantastic experience not to be missed. More important, he was a wonderful person, totally dedicated to his students who revered him as their French national hero."

When Lionel Gossman, the M. Taylor Pyne Professor of Romance Languages and Literatures, Emeritus, arrived at Princeton in 1976, he was made a preceptor in Maman's large lecture class in French history. At that time, full professors at the University also precepted, sometimes in fact in courses taught by assistant professors, Gossman said.

"André's lectures presented French history as a strong, coherent narrative, which he delivered unhesitatingly, in beautiful French," said Gossman, who continued to serve for years as a preceptor in that course. He also remembered there were always "crowds of undergraduates" around Maman's office. "His office hours were simply all the hours of the day when he was not lecturing. The students recognized and deeply appreciated the time, care and energy he devoted to them," he said.

"'Les étudiants d'abord!' [Students first!] was his motto," said Albert Sonnenfeld, a 1958 Princeton graduate alumnus in modern languages and literature and a professor of French at the University from 1958 to 1986.

Maman kindled a love of France and French culture in Princeton students — while they were at Princeton and for years afterward.

Brooke Shields, a 1987 alumna, said Maman's "influence was paramount in my declaring French as my major." She had planned to major in English when she arrived at Princeton as a first-year student but her discussions in and about French with Maman inspired her in many ways.

"I had heard that he was a larger-than-life character who embodied all you’d hope for in a mentor," said Shields, an actress, author and entrepreneur. "He was encouraging in an intimidating, yet necessary way. Although he was focused on civilizations, he urged me to dig deeper into the universe that is French literature. He made it about art and experiencing literature viscerally.

"He had such a sweet sense of humor and a warm heart, and he said he had faith that a whole new world would open up for me mentally and emotionally through the study of French literature," Shields said. "No professor had ever affected me with such a combination of warmth, encouragement, expectation and tough love. He was one of a kind."

"André Maman meant a great deal to my French-studying friends and myself," said Arnold Weinstein, the Edna and Richard Salomon Distinguished Professor of Comparative Literature at Brown University and a 1962 Princeton alumnus who majored in French. "His personal manner — direct, impassioned, indeed young (back then) — struck all of us as welcome and endearing. We saw him as a person of great warmth, authority and immediacy. He was a presence. In the minds of many of us who came his way, he still is," he said.

More than three decades after they graduated, the Class of 1969 made Maman an honorary member of the class — thanks in large part to a tip that class member John Tepe gave his roommate Dick Bott their first year at Princeton. Tepe convinced Bott to top off his Princeton language requirement by taking Maman's two-semester "French Civilization" course, which Tepe raved about.

"Charming, intellectually curious, articulate, interesting, supremely knowledgeable and caring, Maman was the prototype for the modern, engaged professor," said Bott, who bought an apartment in Paris in 1999 and reconnected with Maman, who was by that time serving in the French Senate. From 2004-09 Bott, a retired vice chairman of Morgan Stanley, served as the class president and kept running into classmates with similar stories about Maman. "It soon became clear we wanted to recognize this special man and made him an honorary classmate."

Elyse Michaels-Berger, a 1995 alumna who majored in Romance languages and literatures and took French with Maman, remembered him not only as a professor, but as a mentor and friend. "He sparked my interest in studying abroad and encouraged me to spend a full academic year in Paris. He had an enduring impact on my career path, orienting me in my master’s work in France and advising me on my career choices," said Michaels-Berger, director of the Youth Leadership Initiative/ Summer School at HEC Paris, an international business school.

Maman "regularly opened the doors of the French Senate to Princeton alumni abroad as well as recently admitted students," said Michaels-Berger, who also serves as co-president of the Princeton Alumni Association of France. "His unforgettable presence and contagious love for Princeton inspired students and alumni across decades. He was an ambassador of Franco-American relations for us and inspired us all to continue to promote international exchange. He will be greatly missed by the Franco-American community in Paris."

Maman is survived by his wife, Marie Maman, and his children Jean-Paul Maman; Anne-Marie Maman, the executive director of the Princeton Entrepreneurship Council and a 1984 Princeton alumna; Pierre (Gail) Maman and Suzanne (Massai) Maman Charles; and 10 grandchildren.

A celebration of Maman's life will be planned by his family for a future date.

In lieu of flowers, donations may be made in memory of André Maman to HomeFront in Trenton, www.homefrontnj.org or to the Southern Poverty Law Center, www.splcenter.org.

View or share comments on a blog intended to honor Maman’s life and legacy.