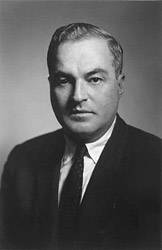 Richard Burgi, Princeton University professor emeritus of Slavic languages and literatures, died of natural causes July 26 in Athens. Remembered for his deep understanding of Russian poetry as well as Hellenic studies, he also was known as a mentor to many students. He was 90.

"Richard Burgi was loved by generations of students," said Michael Wachtel, professor of Slavic languages and literatures and department chair. "I have known several people who remember him as one of the most inspiring teachers they ever had."

Burgi joined the Princeton faculty in 1962 as a full professor and served as chair of Slavic studies for seven years. In 1992, he transferred to emeritus status. From 1954-55 he was a Hodder Fellow in the University's Council of the Humanities. Before coming to Princeton, Burgi taught at Yale University for 13 years.

Born in New York City on Sept. 9, 1921, Burgi received a B.A. from Fordham College in 1942 with a major in classics. After serving in the U.S. Army during World War II, where he learned Russian, he earned an M.A. in 1947 and a Ph.D. in 1949 in Slavic languages and literatures from Columbia University.

At Princeton, Burgi taught Russian at all levels and specialized in early 19th-century Russian literature, in particular teaching courses on Alexander Pushkin and Nikolai Gogol. He wrote a book on the history of the Russian hexameter and served on the College Board committees for Russian achievement tests and Graduate Record Examinations.

Burgi also played an important role in establishing the field of modern Greek studies at the University, teaching modern Greek language and literature from the early 1970s until his retirement.

"A dear friend and close colleague, Richard was instrumental in building a tradition of excellence in the teaching of modern Greek at Princeton," said Dimitri Gondicas, the Stanley J. Seeger Director of the Center for Hellenic Studies. "A gifted teacher, he inspired countless Princetonians with his deep knowledge of Hellenic culture and his passion for Greece, his adoptive country."

While serving as chair of the Department of Slavic Languages and Literatures from 1963 to 1970, Burgi made appointments that helped strengthen the field at Princeton. One of the faculty members he hired was Charles Townsend, now professor of Slavic languages and literatures emeritus. Townsend met Burgi in 1953 when, as a senior at Yale, he took Burgi's second-year Russian course.

At Princeton, the two worked together for 26 years with Townsend succeeding Burgi as chair. "Richard's excellent teaching contributed a great deal to our work," Townsend said. "He gave unstintingly to everyone he instructed."

Wachtel added that Burgi's "conception of education went beyond the classroom" and included informal tutorials over lunch and class trips to New York to see Russian opera.

Stephanie Sandler, the Ernest E. Monrad Professor of Slavic Languages and Literatures at Harvard University and a member of Princeton's Class of 1975, recalls those occasions and noted Burgi's influence on her teaching style. "He exemplified for me what I try to do in the classroom: showing students how a poem gives us aesthetic pleasure while getting us to think about its subtle, compelling notions of politics, love and language itself," she said.

One of Sandler's classmates, Richard Garner, now dean of the Honors College at Adelphi University, kept in touch with Burgi up until his death. "He was a warm, witty and gifted teacher who enlivened classes in Russian language and literature with references ranging from classical literature to current culture — from ballet and opera to Broadway to popular film," Garner said.

Reflecting his love of both theater and Greece, Burgi donated his collection of modern Greek playbills to the Rare Books Collection of the Princeton library in 1988.

Garner marveled at Burgi's talent with languages. "Richard's linguistic ability was phenomenal," he said. "Greeks thought he was Greek, Russians thought he was Russian. His French, Italian and German were impeccable. In later life, he studied Turkish."

Garner noted that during World War II, Burgi also learned Portuguese to translate radio transmissions for the United States in Brazil. He even used Latin once to communicate with Korean villagers through monks. "Richard, whose Latin was perfect, conducted all the U.S. army business by speaking Latin with the monks who then spoke Korean to the local population," Garner said.

Starting in 1968, Burgi spent his summers in Greece, teaching Greek to foreigners. He moved there permanently after retiring from Princeton.

A memorial service for Burgi will take place in Athens in early September.