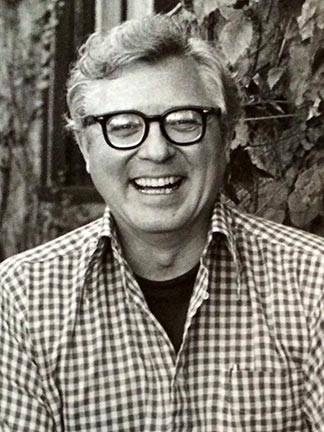 Clarence Brown, professor of comparative literature, emeritus, at Princeton University, died in his sleep July 18 after a long illness in Seattle, where he moved after retiring in 1999. He was 86.

Brown, whose field was the interpretation of modern Russian writing, came to Princeton as an instructor in 1959 and became a professor in 1969. He first taught courses on Russian language and literature in the Department of Romance Languages and then in the Program in Slavic Languages and Literatures, which became a formal department in 1967. He is known for his scholarship on the Russian poet Osip Mandelstam, who was condemned to a concentration camp in Siberia by Stalin and remained a "non-person" in the USSR.

"Clarence Brown is recognized throughout the world as a pioneer in the study of Mandelstam," said Michael Wachtel, chair of the Department of Slavic Languages and Literatures. "In the dark Cold-War years, Clarence spent a year in the Soviet Union. He found his way to Mandelstam's widow, Nadezhda, and spent most of his time in conspiratorial conversations with her and her friends. The eventual result was a book of scholarship that still retains its value as well as a number of superb translations of poetry and prose," he said.

"The Prose of Osip Mandelstam" (1965) was nominated for a National Book Award. Mandelstam's papers, entrusted by his widow to Brown, are housed in Firestone Library and were curated by Brown. According to Wachtel, the papers comprise the most valuable Russian literary archive outside Russia. Brown's 1973 book "Mandelstam" earned him the Christian Gauss Award in Literary Criticism.

"Clarence Brown belonged to the courageous generation that put Princeton on the map of Russian studies during the risky and delicate years of the Cold War," said Caryl Emerson, the A. Watson Armour, III, University Professor of Slavic Languages and Literatures and Comparative Literature, Emeritus. "He was a legend, a scholar who knew the people we had studied in textbooks in graduate school."

Emerson noted that Brown once helped her with a project on the Russian émigré composer Arthur Vincent Lourie, who spent the last 10 years of his life in Princeton. "In his youth Lourie had a non-trivial love affair with the great Russian poet Anna Akhmatova, before the Russian Revolution; in the early 1960s Lourie nostalgically tried to resurrect the relationship. It was Clarence Brown who ferried letters back and forth from Akhmatova in the USSR and Lourie off Nassau Street."

In 1971, Brown joined the Department of Comparative Literature.

"He offered seminars in what were then remote outposts of the discipline: fantastic, dystopian and science fiction; the craft of translation; and the art and history of the American newspaper cartoon," said Eileen Reeves, professor of comparative literature and chair of the department.

Born in Anderson, South Carolina, in 1929, Brown began drawing cartoons as a young boy and then as editor of his high school newspaper during World War II. He served as cartoon editor at the Saturday Review from 1977 to 1984. His work also appeared in Esquire, Playboy, The Village Voice and The Spectator, among others. Cartoons often punctuated the column he wrote called "Ink Soup" for The Times of Trenton. His work as a cartoonist was the focus of a profile in The New York Times in 1984.

"Students in his very popular 'Forms of Short Fiction' course will recall that Clarence frequently enlivened his lectures with impromptu, amusing, and always educational chalkboard sketches," said Reeves, who served as Brown's preceptor as a beginning assistant professor.

Judith Lewin, who earned her Ph.D. in comparative literature from Princeton in 2002 and is an associate professor of English at Union College in Schenectady, New York, was a preceptor for Brown in "Really Fantastic Fiction." The focus of this course was realist writers who introduce the supernatural into their books. One of Brown's readings for the class was George Herriman's "Krazy Kat" cartoons.

"What I hadn't quite realized was how teaching 'Krazy Kat' and nervously learning about how to teach the history of American comics would lead to my current interest in (Jewish) graphic novels," she said. "I am certain Professor Brown influenced my own teaching significantly since I still stand by his advice to grad students: get out of the way of undergrads making their own discoveries and learning to think for and express themselves."

Val Vinokur, who earned his Ph.D. in comparative literature from Princeton in 2001, also precepted for Brown and called it a "formative experience." He took part in the translation workshop Brown led in the Program in Creative Writing. "In fact his work as a translator and critic of 20th-century Russian literature was one of the reasons I came to Princeton," said Vinokur, associate professor of literary studies at Eugene Lang College at the New School in New York.

"In his ongoing commitments to the practice of translation, to the question of Russia and the West, and to the global development of postmodern fiction, he helped shape this department's early and distinguishing features," Reeves said. In the 1960s and '70s, Brown served as a board member of the National Translation Center. In 1990, he helped Philip Bobbitt, a 1971 alumnus, with the creation of the Rebekah Johnson Bobbitt National Prize for Poetry at the Library of Congress.

James Irby, professor of Romance languages and literatures, emeritus, who arrived at Princeton the same time as Brown and remained close colleagues and friends until Irby's retirement in 2000, noted, "Clarence was a very courteous, even courtly person, always soft-spoken, with a South Carolina accent and subtle sense of humor."

Added Irby: "He was a wonderful reader of poetry. In his courses he always gave close attention to the verbal particulars of the texts in question, whether prose or poetry, and, with his knowledge of several literatures, knew how to place them in different perspectives. His critical prose is a model of penetrating clarity and elegant concision."

Brown earned his bachelor's degree in classics at Duke University in 1950. After graduation, he was drafted and served three years in the Army Security Agency, including a year of intensive training in Russian at the Army Language School in Monterey, California, after which he was sent to Berlin as a German translator.

He earned a master's degree in linguistics in 1955 from the University of Michigan-Ann Arbor and his Ph.D. in 1962 from Harvard University.

Brown is survived by his wife, Jacqueline, who worked at several Princeton libraries from 1975 to 1984, and then as director of information services in the Office of Information Technology until 1999; daughter Kitty; son Christopher; brother Douglas; and four grandchildren.

Contributions made in Brown's honor may be sent in his name to Princeton's Department of Comparative Literature or the National Brain Tumor Society.