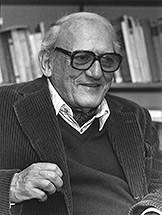 Joseph Frank, the Class of 1926 Professor of Comparative Literature, Emeritus, at Princeton University, died of pulmonary failure Feb. 27 at Stanford Hospital in Palo Alto, Calif. His five-volume biography of Dostoevsky is widely recognized as the best biography of the writer in any language, according to Princeton University Press, who published the work. Frank is remembered as a "brilliant scholar" and was a mentor to many students. He was 94.

Frank began his career during World War II as an editor in the Bureau of National Affairs in Washington, D.C. (1942-1950) during which time he published his groundbreaking article "Spatial Form in Modern Literature," in 1945. Based on this influential essay, he won a Fulbright scholarship to the University of Paris and subsequently was accepted by the Committee on Social Thought at the University of Chicago to earn a Ph.D. His first contact with Princeton was as a lecturer in the Gauss Seminars in Criticism in 1955-56, at the invitation of professors Richard Blackmur, E.B.O. Borgerhoff and Francis Fergusson, all of whom became close friends, according to Frank's wife, Marguerite, who joined the mathematics department as a researcher during this time.

Frank taught at the University of Minnesota and Rutgers University before joining the Princeton faculty in 1966 as a full professor. He also served as the director of the Gauss Seminars in Criticism until 1983, and transferred to emeritus status in 1985. He served as a visiting member of the Institute for Advanced Study in Princeton from 1985-88 and joined the faculty of Stanford University in 1985.

He was a wide-ranging writer and intellectual before joining academia, pursuing diverse topics in literature, the arts, philosophy and religion, while building a reputation as a theoretician.

Frank's work on Dostoevsky was his magnum opus that included two decades researching and writing the five-volume, 2,500-page biography, which was published between 1976 and 2002.

The biography explores the life and work of Dostoevsky in the context of the cultural and political history of 19th-century Russia to give readers a picture of the world in which Dostoevsky lived and wrote. It won a National Book Critics Circle Award, a Los Angeles Times book prize, two James Russell Lowell Prizes, two Christian Gauss Awards, among other honors. In 2008, the American Association for the Advancement of Slavic Studies awarded Frank its highest honor, the Award for Distinguished Contributions to Slavic Studies.

Ellen Chances, professor of Slavic languages and literatures, knew Frank both from the perspective of a graduate student — he served as her Ph.D. dissertation adviser at Princeton — and a colleague.

"Joe's passion for Dostoevsky was palpable," Chances said. "It was exciting for us graduate students to hear his brilliant interpretations of Dostoevsky's works and of Western European novels. As my dissertation adviser, Joe's breadth and depth of knowledge of Dostoevsky's novels, of his historical, intellectual and cultural contexts, profoundly influenced my thinking about Dostoevsky."

Frank was equally engaging as a colleague, Chances said. "It was stimulating to talk to Joe — about Dostoevsky, about literary criticism, about Russian intellectual history, about Paris, and of course, about the latest news about his family. His erudition — and his laughter — graced the campus."

As a professor and as an adviser, Frank was considered a mentor in deepening not only the academic experiences of his students but also their careers beyond Princeton.

"Since my very first graduate course at Princeton, Professor Frank became the ultimate role model of a brilliant scholar," said Anna Tavis, executive editor of People and Strategy Journal who earned her Ph.D. in 1987. "He was the supportive dissertation adviser and a personal mentor to me. I trusted him with my deepest doubts, and he knew how to listen. He let me know that he had a vision for me, and I felt enriched for rest of my professional life. Joe Frank became synonymous with my graduate experience at Princeton. "

The legacy of scholarship Frank left at Princeton is felt today. "Current students continue to appreciate Joe's ideas," Chances said. "On a regular basis, I assign some of Joe's writings in my Dostoevsky seminar. The students, not surprisingly, always say how illuminating his interpretations are."

In 1987, four years after Frank left Princeton, Caryl Emerson, the A. Watson Armour, III, University Professor of Slavic Languages and Literatures, arrived. "Those four years of his absence had turned him into a legend," Emerson said. "Two volumes of his Dostoevsky biography were in print, which would permanently change the way that titanic novelist would be read. Joseph Frank was not a Russianist; he was a Europeanist who fell in love with Dostoevsky's life and brought the whole of European culture to bear on it. For those of us trained more narrowly, this was a revelation."

In addition to the awards for his Dostoevsky biography, Frank's numerous academic honors include two Guggenheim Fellowships, 1956-57 and 1975-76. He was also elected a Fellow of the American Academy of Arts and Sciences in 1969.

Chances said she believes Frank's scholarship will continue to influence generations of students to come. "In Dostoevsky’s novel, 'The Brothers Karamazov,' we read that seeds of good keep getting transmitted from one person to the next, from one generation to the next. Joe's brilliant interpretations, in his books about Dostoevsky, keep being transmitted to readers, scholars and students all over the world."

In addition to his wife, Frank is survived by his daughters, Claudine and Isabelle — members of Princeton's Classes of 1978 and 1980, respectively — and two grandchildren.

A memorial service for Frank will take place in California in the spring.