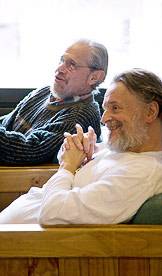 Princeton mathematician John Conway (right), working with his longtime colleague, Simon Kochen (left), will explain to the University community and the public the tenets of their "Free Will Theorem" during a six-week lecture series that begins Monday, March 23. They say they have proved that if humans have free will, then elementary particles possess free will as well.

The lectures to be presented as part of the series on the Free Will Theorem are:

• March 23 -- "Free Will and Determinism in Science and Philosophy"

• April 13 -- "Quantum Mechanics and the Paradoxes of Entanglement"

• April 27 -- "The Theorem's Implications for Science and Philosophy"

All are at 8 p.m. on Mondays in A02 McDonnell Hall. They are sponsored by the Department of Mathematics, Princeton University Press and the Office of Information Technology. The lectures are being videotaped and will be available for later viewing online.

Conway, a major figure, to give lectures on ideas formed with Kochen

Ten years ago, Princeton mathematician John Conway wowed standing-room-only crowds with a series of public math lectures. Among many things, he spoke about ancient Greek geometers and his modern discovery of surreal numbers. He threw in some math tricks, too. Audiences flocked to hear the joys of math recounted by one of its masters and left enthralled by Conway's intellectual wizardry.

On Monday, March 23, Conway -- who has fought his way back to health from a 2006 stroke -- will launch another lecture series that will once again place his mind and legendary personality squarely in the spotlight.

This intellectual journey promises to be different.

This time, the presentations will have one focus. Working with his longtime colleague, Princeton mathematician Simon Kochen, Conway is set on explaining to the University community and the public over six weeks the tenets of their "Free Will Theorem."

The gist of it is this: They say they have proved that if humans have free will, then elementary particles -- like atoms and electrons -- possess free will as well.

"You want to know how the world works -- there's this sense that the present state is somehow derived from the moment before it," said Conway, an extrovert's extrovert who, in addition to studying fundamental mathematical subjects like symmetry, excels in card tricks and memory games. "We were trying to understand how it happens, and we suddenly realized there was no way of explaining successive states because the previous state could give rise to two different positions."

By saying "two different positions," Conway means that a particle is free to zip one way or another as he is equally unbound in deciding whether or not to drop a cup he is clasping.

The lectures on consecutive Mondays at 8 p.m. will start on March 23 and end on April 27 in A02 McDonnell Hall.

"Given that John and Simon have been squeezing in work devising their Free Will Theorem between games of Go and tennis (respectively) for more than a decade, I should think they are very happy and relieved to now get it out into the world and generating debate," said Siobhan Roberts, a Toronto-based author who is writing a book about Conway. She views the theorem as an important addition to Conway's work, but noted that it is unlike anything Conway has done before.

These high-powered mathematicians may occasionally act like grownup children when they are tackling math mysteries or tangling with undergraduates in the University's mathematics lounge (Conway's unofficial office). They are, however, deadly serious about this topic. They have packaged their arguments in an airtight mathematical theorem that rests on what they say are three unassailable axioms which happen to rhyme -- spin, fin and twin. 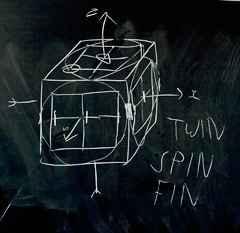 The two have packaged their arguments in an airtight mathematical theorem that rests on what they say are three unassailable axioms which happen to rhyme -- spin, fin and twin.

What's more, they believe their case can be made to an intelligent public. Unlike Conway's previous set of lectures, which touched on random subjects under the aegis of math, each of the forthcoming lectures will build on the previous ones in the series, much the way a theorem demonstrates truth through a logical chain of reasoning.

"It's not about theories anymore -- it's about what the universe does," said Kochen, a professor of mathematics and the associate chair of the Department of Mathematics. "And we've found that, from moment to moment, nature doesn't know what it's going to do. A particle has a choice."

The public should find their work interesting because the question of whether the behavior of particles is predetermined is linked to the centuries-old debate over the existence of free will, they said.

Conway was to have presented the theorem to the Princeton community in 2006 but was felled by a stroke a week before the presentations were scheduled to start. He and Kochen came up with the full theorem in 2004 while they were working on a geometry problem on a chalkboard in Kochen's fifth-floor office in Fine Hall. They have been collaborating for decades and have long enjoyed the give and take.

"As he and Simon were getting more and more into their free will discussions, sometimes they resembled two kids," said Conway's wife, Diana Conway, who observed first hand the evolution of the idea. "There were phone calls all day and evening, they'd rush to each other's offices and talk excitedly about whatever today's thought was."

Her husband, she said, is looking forward to the lecture series and the inevitable interaction with the audience. "When an idea of his is well received, it is like a shot of adrenaline for him," she said. "I really think he was born to be an educator."

The mathematicians are working on a forthcoming book describing the proof to be published by Princeton University Press. Kochen convinced Conway to do the lectures this year.

Conway was to have presented the theorem to the Princeton community in 2006 but was felled by a stroke a week before the presentations were scheduled to start. He and Kochen have been working on the formula for more than a decade and came up with the full theorem in 2004 while they were working on a geometry problem on a chalkboard in Kochen's fifth-floor office in Fine Hall.

The work grows out of an idea first conceived by Kochen and Ernst Specker in 1965.

The smallest particles inside an atom have a property known as "spin." And scientists have found that the spin of some particles may be related to the spin of other particles, something known as "entanglement" and also known as the "twin" axiom. However, an experimenter's choice of spin direction to measure cannot be communicated faster than the speed of light. (This is the "fin" axiom.)

Looking at this sequence of facts, the mathematicians have been able to extract the conclusion that, if a human experimenter can make decisions independently of past events, then the particle can also make a free choice.

Conway, the John von Neumann Professor in Applied and Computational Mathematics, has been a Princeton faculty member since 1987. His fascination with games and puzzles has led him to important discoveries in areas of mathematics from number theory to geometry. He also is well known as the inventor of the Game of Life, in which checker-like objects replicate themselves and form patterns on a grid.

Kochen, whose special interests are mathematical logic and applying techniques of logic to other fields, joined the Princeton faculty in 1967. In particular, he has explored the connections between logic and algebra and number theory. He has also published papers in quantum mechanics.