John Horton Conway, a legendary mathematician who stood out for his love of games and for bringing mathematics to the masses, died on Saturday, April 11, in New Brunswick, New Jersey, from complications related to COVID-19. He was 82.

A memorial/visitation honoring Conway will be held Sunday, Oct. 11, from 3-5 p.m., at Mather-Hodge Funeral Home, 40 Vandeventer Ave., Princeton, NJ 08542. The visitation will be from 3-4 p.m.; friends will be invited to speak from 4-5 p.m. Social distancing regulations limit the number of people inside at one time to 25. Please wear a face covering. Questions may be directed to dianaconway13@aol.com.

Known for his unbounded curiosity and enthusiasm for subjects far beyond mathematics, Conway was a beloved figure in the hallways of Princeton's mathematics building and at the Small World coffee shop on Nassau Street, where he engaged with students, faculty and mathematical hobbyists with equal interest.

Conway, who joined the faculty in 1987, was the John von Neumann Professor in Applied and Computational Mathematics and a professor of mathematics until 2013 when he transferred to emeritus status. 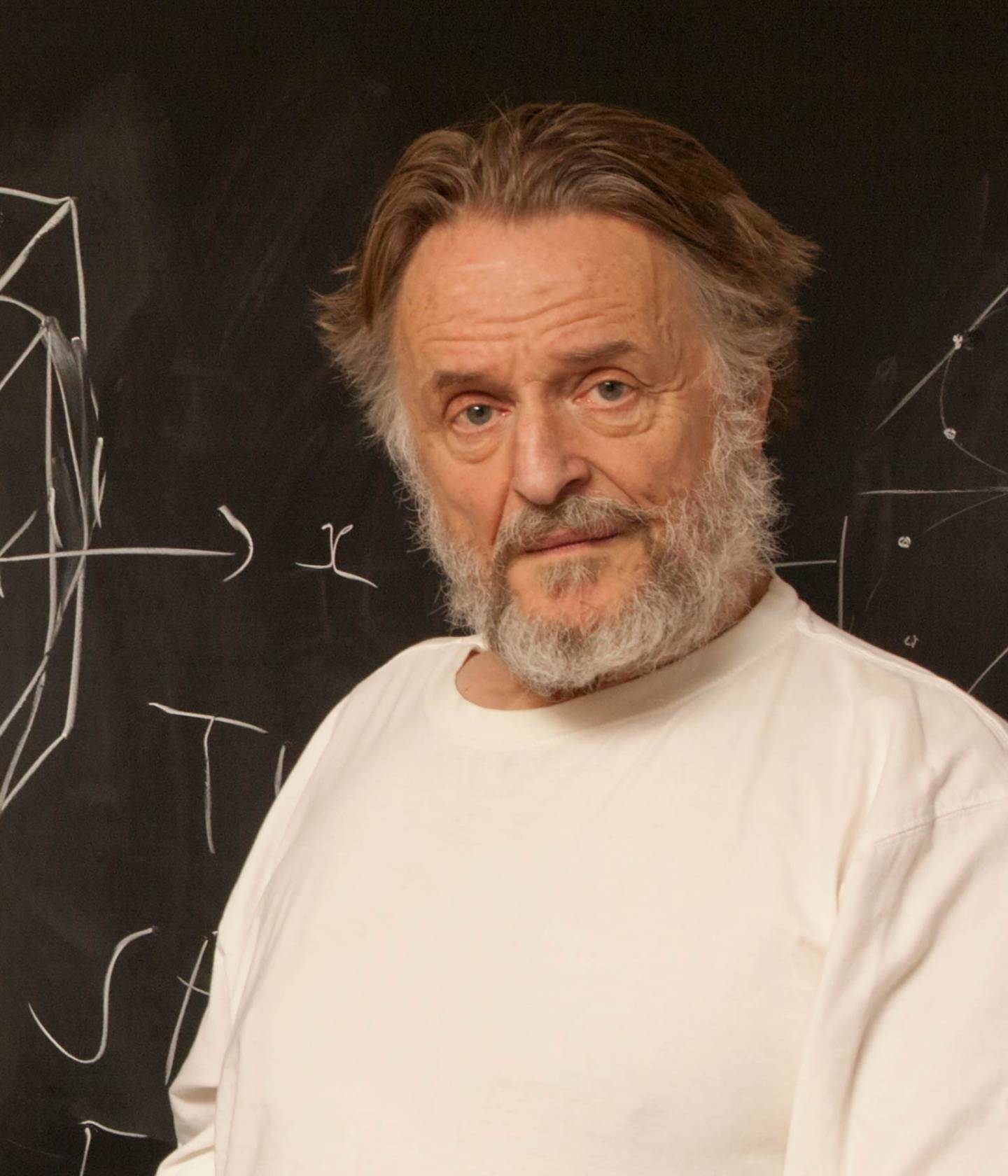 "John Conway was an amazing mathematician, game wizard, polymath and storyteller who left an indelible mark on everyone he encountered — colleagues, students and beyond — inspiring the popular imagination just as he unraveled some of the deepest mathematical mysteries," said Igor Rodnianski, professor of mathematics and chair of the Department of Mathematics. "His childlike curiosity was perfectly complemented by his scientific originality and the depth of his thinking. It is a great loss for us and for the entire mathematical world."

"He was like a butterfly going from one thing to another, always with magical qualities to the results," said Simon Kochen, professor of mathematics, emeritus, a former chair of the department, and a close collaborator and friend.

Kochen went on to say that Conway was a "magical genius," defined as a person who is not merely smarter than most people but whose mind works in highly advanced and unfathomable ways. The term was coined by the late mathematician Mark Kac to describe the physicist Richard Feynman.

One of Conway's most well-known accomplishments was the Game of Life, which he conceived in the 1970s to describe how life can evolve from an initial state. The concept builds on ideas that trace back to John von Neumann, a pioneer of early computing, in the 1940s. Conway's game involves a two-dimensional grid in which each square cell interacts with its neighbors according to a set of rules. Over time, these simple interactions give rise to complexity.

The game was introduced in an October 1970 issue of Scientific American's mathematical games column, whose creator, the late Martin Gardner, was friends with Conway. Conway continued his interest in "recreational mathematics" by inventing numerous games and puzzles. At Princeton, he often carried in his pockets props such as ropes, pennies, cards, dice, models and sometimes a Slinky to intrigue and entertain students and others.

Manjul Bhargava, who was advised by Conway during his first year as a graduate student at Princeton and who is now Princeton's Brandon Fradd, Class of 1983, Professor of Mathematics, said that Conway's love for games and magic tricks as a way to teach mathematical concepts inspired Bhargava's own approach.

"I learned very quickly that playing games and working on mathematics were closely intertwined activities for him, if not actually the same activity," Bhargava said. "His attitude resonated with and affirmed my own thoughts about math as play, though he took this attitude far beyond what I ever expected from a Princeton math professor, and I loved it."

Conway's genius led to many discoveries and accomplishments far deeper and more fundamental than the Game of Life, according to Peter Doyle, a longtime friend and collaborator, and a professor of mathematics at Dartmouth College. "People invariably describe Conway as the inventor of the Game of Life," Doyle said. "That's like describing Bob Dylan as the author of 'Blowin' in the Wind.'''

Later, with Kochen, Conway developed and proved the Free Will Theorem in 2004 to explain principles of quantum mechanics, the branch of physics that dictates the behaviors of atoms and other elementary particles. It states that if an experimenter can freely choose what to measure in a particular experiment, then elementary particles can also freely choose their spins in order to make the measurements consistent with physical law.

The Free Will Theorem gained attention for its implication that if humans have free will, then elementary particles — like atoms and electrons — also possess free will.

Conway was born in Liverpool, England, on December 26, 1937. He received his B.A. from Cambridge University in 1959 and his Ph.D. from the same institution in 1964. He was a faculty member at Cambridge until he came to Princeton.

David Gabai, the Hughes-Rogers Professor of Mathematics and former chair of the department, remarked, "John Conway was a beloved faculty member of the department, always very friendly and ready to chat with anyone. People would come from far away to talk to him."

Conway's regular office was filled to overflowing with books and colorful toy models, built from paper and wood to illustrate mathematical concepts, so he typically could be found sitting in one of the small nooks across from the common room in Fine Hall, Gabai added. There, Conway would talk to students and colleagues, or be engrossed in writing at the adjacent blackboard or with a pen and pad of paper.

"An extrovert by nature, John liked to be at the center of mathematical discussions and he enjoyed thinking and inventing on the spot," Sarnak said. "To this end he gave up his regular office in the Princeton mathematics department and moved into the big common room where he could always be found holding court on the latest (often his!) mathematical development or invention. On days of little mathematical news he would be challenging others to mathematical games or puzzles and now that I think of it, I can't recall any instance where he did not win.

"The mathematical world has lost a very special person but we are much richer for all that he gave us."

Conway made numerous advances in many areas of mathematics. In group theory, he worked on the classification of finite simple groups and discovered the Conway groups, and was the primary author of the ATLAS of Finite Groups in 1986. With Simon Norton at Cambridge in 1979, he conceived of the complex of conjectures named "Monstrous Moonshine." He also investigated lattices in higher dimensions, and with Neil Sloane at Bell Labs authored Sphere Packings, Lattices and Groups in 1988.

In number theory, Conway proved as a graduate student the conjecture by Cambridge's Edward Waring that every integer could be written as the sum of 37 numbers, each raised to the fifth power. In 1993 at Princeton, he proved with former student William Schneeberger, that if an integral positive definite quadratic form with integer matrix represents all positive integers up to 15, then it represents all positive integers.

Working with quaternions, he invented the system of icosians in algebra. He was the author of several books and monographs, including “On Quaternions and Octonions” in 2003, with former student Derek Smith, now a professor at Lafayette College, “The Sensual (Quadratic) Form” in 1997 with former student Francis Fung, and “Regular Algebra and Finite Machines” in 1971.

In geometric topology, Conway made contributions to knot theory and a variant now called the Alexander-Conway polynomial. He further developed tangle theory and invented a system of notation for tabulating knots, now known as Conway notation, while extending the knot tables to 11 crossings.

"He was really without exaggeration a genius, absolutely" said Joseph Kohn, professor of mathematics, emeritus, and a former chair of the department. "He knew so many things and he was interested in all aspects of mathematics and science. He was an enthusiastic teacher; he liked to share his knowledge and discuss things. He was very playful, and always ready to have a game, many of which he invented himself."

Kohn related a time when Conway had committed to giving a large public lecture and on the way to the lecture, asked his companions what topic he should cover. Upon deciding on the topic in the car, Conway successfully gave the lecture without any additional preparation.

Conway combined playfulness with a mastery of esoteric information, several who knew him commented.

"Once he shook my hand and informed me that I was four handshakes away from Napoleon, the chain being me, John Conway, Bertrand Russell, Lord John Russell and Napoleon," Gabai said.

Conway's wife, Diana, first met Conway in 1996 in a coffee shop on Witherspoon Street in Princeton where they were both regular morning customers. The two discovered that they shared a love of games and became friends. At the time, Diana worked at the University bookstore and though not a mathematician, enjoyed math and later became an accountant. They married in 2001.

"John was the most fascinating human being I've ever met," said Diana Conway. "He was not only interested in math, he was interested in everything."

Diana Conway described John Conway's willingness to talk to anyone interested in mathematics, whether another university professor or a hobbyist with an interesting theory or discovery.

"There were always strange characters showing up at our house, joining us for dinner, or sitting with John out in the back garden," said Diana Conway. "He would get buckets and buckets of fan mail."

Conway's passion for teaching extended not just to University undergraduates but also to high school and middle school students at regional math camps held during summers at universities around the country. Diana and their young son Gareth would accompany him.

View or share comments on a blog intended to honor Conway’s life and legacy.