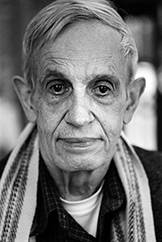 Princeton University mathematician John Nash received the 2015 Abel Prize from the Norwegian Academy of Science and Letters for his seminal work on partial differential equations, which are used to describe the basic laws of scientific phenomena. The award is one of the most prestigious in the field of mathematics and includes an $800,000 prize. Nash shares the prize with longtime colleague Louis Nirenberg, a professor emeritus at New York University's Courant Institute of Mathematical Sciences.

The handshakes and congratulations, the smiles and shoulder claps, that Princeton University mathematician John Nash received from old colleagues and younger researchers in Princeton's mathematics department had a special meaning for all present.

Nash is a 1994 Nobel Prize laureate in economics publicly known for his work in game theory as dramatized in the 2001 film "A Beautiful Mind" in which he was portrayed by actor Russell Crowe. But for mathematicians it is his seminal work in partial differential equations — which are used to describe the basic laws of scientific phenomena — that stands out as his most astounding and influential accomplishment.

So after Nash received the 2015 Abel Prize by the Norwegian Academy of Science and Letters on Wednesday, March 25, in recognition of that work, the sentiment among those who have long admired and been inspired by his work was that his true genius had finally been acknowledged.

"John, it's wonderful for us in Princeton mathematics, and for mathematicians in general, that you've received this long-awaited recognition," said David Gabai, the Hughes-Rogers Professor of Mathematics and department chair, during a reception Wednesday afternoon in Nash's honor.

Nash, a Princeton senior research mathematician, will share the Abel Prize with longtime colleague Louis Nirenberg, a professor emeritus at New York University's Courant Institute of Mathematical Sciences. Established in 2003, the award is one of the most prestigious in the field of mathematics and includes an $800,000 prize. Nash is the second consecutive Princeton researcher to receive the honor; Yakov Sinai, a Princeton University professor of mathematics, was awarded the 2014 Abel Prize for his influential 50-year career in mathematics. Several past winners have been University alumni. 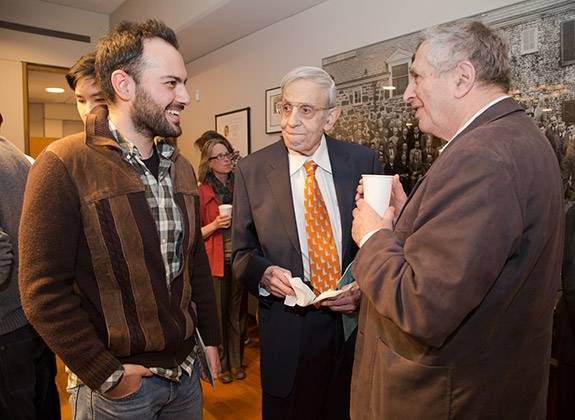 Nash (center) is the second consecutive Princeton researcher to receive the Abel Prize. Yakov Sinai (right), a Princeton professor of mathematics, was awarded the 2014 Abel Prize for his influential 50-year career in mathematics. At 86, Nash continues to inspire and work with younger researchers such as Michail Rassias (left), a Princeton visiting postdoctoral research associate in mathematics who is working on an upcoming book with Nash. (Photos by Danielle Alio, Office of Communications)

During the reception, Nash, in a pressed suit and orange tie adorned with black-and-white line drawings of Princeton's Cleveland Tower, humbly and effortlessly recited the great mathematicians who won the prize in the past and the great mathematicians that inspired them when asked how he felt about receiving the prize. "The Abel Prize is top-level among mathematics prizes," the 86-year-old Nash said in his soft voice. "There's really nothing better."

The academy went on to say: "Their breakthroughs have developed into versatile and robust techniques, which have become essential tools for the study of nonlinear partial differential equations. Their impact can be felt in all branches of the theory …. [T]he widespread impact of both Nash and Nirenberg on the modern toolbox of nonlinear partial differential equations cannot be fully covered here." 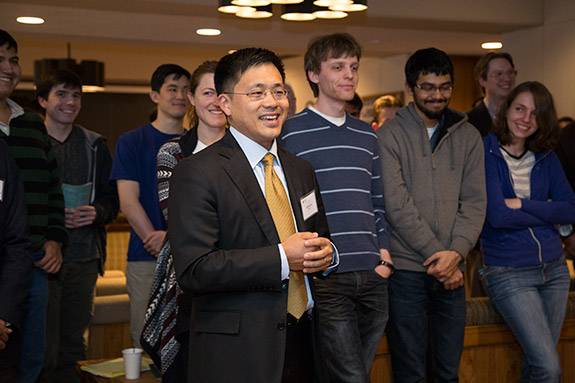 Princeton Provost David S. Lee, a professor of economics and public affairs, said that as an economist he can appreciate the impact of Nash's work. Lee attended the departmental reception along with Deborah Prentice, the dean of the faculty and Alexander Stewart 1886 Professor of Psychology and Public Affairs, and Dean for Research Pablo Debenedetti, the Class of 1950 Professor in Engineering and Applied Science and a professor of chemical and biological engineering.

Nash's name is attached to a range of influential work in mathematics, including the Nash-Moser inverse function theorem, the Nash-De Giorgi theorem (which stemmed from a problem Nash undertook at the suggestion of Nirenberg), and the Nash embedding theorems, which the academy described as "among the most original results in geometric analysis of the twentieth century."

"Short of getting the prize myself, there is no one the prize could go to that would make me more happy," Sergiu Klainerman, Princeton's Eugene Higgins Professor of Mathematics, whose work focuses on partial differential equation analysis and who was a student of Nirenberg's, said during the reception, eliciting laughter from the crowd.

"The prize has redressed a historical anomaly in the public," he said in reference to the popularity of Nash's game-theory work. "We mathematicians know very well that [Nash] did far deeper work much later. These are the works for which he is finally recognized today by the most prestigious mathematics prize." 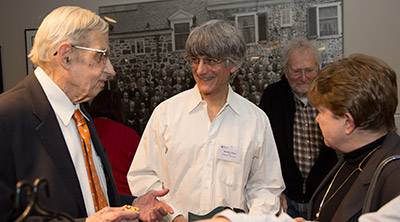 David Gabai (center), the Hughes-Rogers Professor of Mathematics and department chair, said that he feels a "special connection" to Nash from his years as a Princeton graduate student in the 1970s when Nash was a regular feature of the department commons room. At right is Nash's wife, Alicia.

Peter Sarnak, Princeton's Eugene Higgins Professor of Mathematics, said that the Abel Prize is the latest and most prestigious of the many honors that Nash began receiving later in his career starting with the Nobel Prize.

"While his publication list is shorter than many mathematicians, the novelty and impact of each of his papers is unique," Sarnak said. "I have discussed mathematics with him over the years and he thinks very differently to most of us."

Nash's approach to a mathematical problem was so innovative that his methods, such as the Nash embedding theorems, became just as important as the solution, Gabai said.

"The Nash embedding/immersion theorems are absolutely incredible results that any mathematician can appreciate," Gabai said. "Nash's work in game theory and geometry are absolutely fundamental, yet there is no comparison between the depth of the latter and that of the former. His embedding theorems required not only unusual insight but also tremendous technical expertise."

While a Princeton graduate student in the 1970s, Gabai, like other students, was encouraged by Nash's work and presence at the University, he said. "We all knew about his amazing and hard-to-believe work. That strongly contributed to an atmosphere that encouraged us to be ambitious and to ask bold and crazy questions," Gabai said. 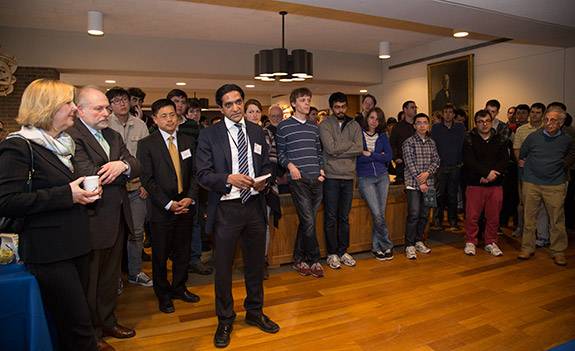 Are Straume, the counselor for science and higher education at the Norwegian Embassy in Washington, D.C., congratulated Nash on behalf of the Norwegian Academy of Science and Letters. "I'd like to congratulate Princeton University on receiving the Abel Prize for the second year in a row — that's quite an achievement," Straume said.

Joseph Kohn, a Princeton professor of mathematics, emeritus, recalled that in 1952 he took an analysis course that Nash taught at the Massachusetts Institute of Technology. Already known for his work, Nash was nonetheless approachable and dynamic in the classroom. Outside of class he would hang around with students in the commons room where sometimes he and other revered mathematicians would challenge one another with mathematical puzzles.

"There was a deep sense of mathematics as sport and it was very inspiring," Kohn said during the reception. "It was motivating to see how John was thinking. He was known but had a playful attitude outside of the classroom."

Many years later, with a reputation bordering on legendary, Nash continues to be both inspiring and approachable to new generations of mathematicians, said Michail Rassias, a Princeton visiting postdoctoral research associate in mathematics. Rassias is working on an upcoming book with Nash.

"He's always open to anyone who has questions. He has an easy and friendly way," Rassias said.

"Working with him is an astonishing experience — he thinks differently than most other mathematicians I've ever met. He's extremely brilliant and has all this experience," Rassias said. "If you were a musician and had an opportunity to work with Beethoven and compose music with him, it'd be astonishing. It's the same thing." 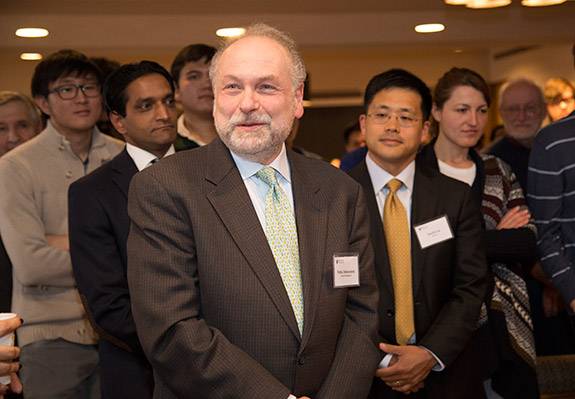 Dean for Research Pablo Debenedetti said that Nash's receiving of the Abel Prize, combined with Sinai's in 2014, is "one more external recognition for the department and confirms its status as one of Princeton's crown jewels."

Nash joined the Princeton mathematics department as a senior research mathematician in 1995. His honors include the American Mathematical Society's 1999 Leroy P. Steele Prize for Seminal Contribution to Research and the 1978 John von Neumann Theory Prize. Nash holds membership in the National Academy of Sciences and in 2012 was an inaugural fellow of the American Mathematical Society.

Nash and Nirenberg were announced as the 2015 Abel Prize recipients in Oslo on March 25 by the president of the Norwegian Academy of Science and Letters. They will accept the prize from His Majesty King Harald V of Norway during a May 19 ceremony in Oslo.

A video of the Abel Prize announcement is available for viewing.