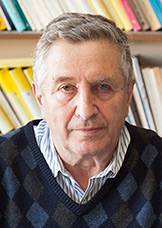 Yakov Sinai, a Princeton University professor of mathematics, was awarded the 2014 Abel Prize by the Norwegian Academy of Science and Letters for his influential 50-year career in mathematics. The award is one of the most prestigious in the field of mathematics and includes a $1 million prize.

Yakov Sinai, a Princeton University professor of mathematics, today was awarded the 2014 Abel Prize by the Norwegian Academy of Science and Letters for his influential 50-year career in mathematics. Established in 2003, the award is one of the most prestigious in the field of mathematics and includes a $1 million prize.

Prominent in the fields of mathematics and physics, Sinai was recognized for his "fundamental contributions to dynamical systems, ergodic theory, and mathematical physics," according to the award citation. The academy went on to describe Sinai as:

"One of the most influential mathematicians of the twentieth century. He has achieved numerous groundbreaking results in the theory of dynamical systems, in mathematical physics and in probability theory. Many mathematical results are named after him, including Kolmogorov-Sinai entropy, Sinai's billiards, Sinai's random walk, Sinai-Ruelle-Bowen measures, and Pirogov-Sinai theory."

Sinai credited his colleagues and the intellectual environment at Princeton for helping inspire the work that earned him the Abel Prize and all of his many honors, which he holds as equally important.

"The fact that I received this award is very much a mark of the fact that I am a part of this department and this University," Sinai said during a departmental reception in honor of his award. Faculty members, administrators and students, as well as the Norwegian consul, were in attendance.

"Here there are many great scientists and it is useful to communicate with them. I always can find a person to ask the right questions," he later added. "All of my honors are very important to me. If I have many children, it is hard for me to answer the question of which one I like more. I like all of my honors."

Sinai was honored with a departmental reception in recognition of his award. In attendance were faculty members, administrators, students and the Norwegian consul, Zenia Chrysostomidis (second from right). Sinai credited his colleagues and the intellectual environment at Princeton for helping inspire his work. He has published more than 250 papers and several books. He also has received numerous honors, including the American Mathematical Society's 2013 Leroy P. Steele Prize for Lifetime Achievement, and holds membership in several mathematical societies and academies around the world. (Photo by John Jameson, Office of Communications)

A prolific researcher who joined the Princeton faculty in 1993, Sinai has published more than 250 papers and several books, and supervised more than 50 doctoral students. Many of his students have gone on to distinguished careers and to receive high honors, including the Fields Medal that the International Mathematical Union presents every four years to outstanding mathematicians under the age of 40. Sinai was appointed chairman of the Fields Medal Committee that chose the recipients for 2002.

He also has received numerous honors, including the American Mathematical Society's 2013 Leroy P. Steele Prize for Lifetime Achievement; the 2009 Henri Poincaré Prize from the International Association of Mathematical Physics; Northwestern University's 2002 Frederic Esser Nemmers Prize in Mathematics; the 1997 Wolf Prize in mathematics; and the 1992 Dirac Medal of the International Center for Theoretical Physics.

Since coming to Princeton in 1993, Sinai (left) has advised numerous students, including Alex Kontorovich (center), an assistant professor of mathematics at Yale University who received his bachelor's degree in math from Princeton in 2002. Pictured at right is John Nash, a Princeton senior research mathematician and the 1994 Nobel Economics laureate. (Photo by John Jameson, Office of Communications)

David Gabai, the Hughes-Rogers Professor of Mathematics and department chair, said that the prize honors Sinai's long career as preeminent mathematician and mentor.

"I believe [Sinai] is definitely one of the great mathematicians of the 20th and 21st centuries and certainly one of the most influential mathematicians," Gabai said. "He's also been a tremendous influence to the young people who have worked underneath him. For 50 years he's been producing stellar students."

Sinai joins a list of Abel Prize Laureates that illustrates the strength of the mathematics that comes out of the University and the Princeton area, Gabai said. While Sinai is the first Princeton faculty member to receive the Abel Prize, several past winners were either University alumni or associated with the Institute for Advanced Study.

Princeton Provost David Lee, a professor of economics and public affairs, said that the prize is "further evidence of where our [mathematics] department stands in the world."

"The whole University should be proud of this recognition of his enormous achievement in the field and his training of many accomplished students," Lee said. "It's really a great achievement for the department and the University and a day we should all be proud of."

Dean for Research Pablo Debenedetti, the Class of 1950 Professor in Engineering and Applied Science, and a professor of chemical and biological engineering, has used Sinai's work in his own research and understands its ingenuity.

A native of Moscow, Sinai comes from a family of researchers and mathematicians. He received his doctorate from Moscow State University in 1963, where his adviser was the preeminent mathematician Andrey Kolmogorov. In 1971, Sinai became a professor at Moscow State as well as a senior researcher at the Landau Institute of Theoretical Physics outside Moscow, where he maintains a position.

Sinai was announced as the 2014 Abel Prize recipient in Oslo on March 26 by the president of the Norwegian Academy of Science. Sinai will accept his prize from the Crown Prince of Norway during a May 20 ceremony in Oslo.

A video of the Abel Prize announcement is available here.