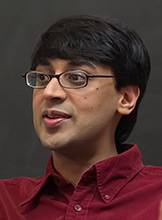 Princeton University mathematician Manjul Bhargava was awarded today the 2014 Fields Medal, one of the most prestigious awards in mathematics, in recognition of his work in the geometry of numbers. The International Mathematical Union (IMU) presents the medal every four years to researchers under the age of 40 based on the influence of their existing work and on their "promise of future achievement."

The honor, often referred to as the "Nobel Prize of mathematics," was awarded to four young researchers at the 2014 IMU International Congress of Mathematicians held in Seoul, South Korea. Bhargava is the eighth Fields Medal recipient from Princeton since 1954 and the third consecutive awardee from the University, following recipients in 2006 and 2010.

The prize committee commended Bhargava, the Brandon Fradd, Class of 1983, Professor of Mathematics at Princeton, "for developing powerful new methods in the geometry of numbers, which he applied to count rings of small rank and to bound the average rank of elliptic curves." The IMU further wrote that his "work in number theory has had a profound influence on the field. A mathematician of extraordinary creativity, he has a taste for simple problems of timeless beauty, which he has solved by developing elegant and powerful new methods that offer deep insight…. He surely will bring more delights and surprises to mathematics in the years to come."

Bhargava, who joined the Princeton faculty in 2003 after receiving his Ph.D. in mathematics from the University in 2001, said that the honor extends beyond himself to include those who have worked alongside him during his career. "I am of course very honored to be receiving the Fields Medal," Bhargava said. "Beyond that, it is a great source of encouragement and inspiration, not just for me, but I hope also for my students, collaborators and colleagues who work with me. Needless to say, this is their prize, too!"

David Gabai, the Hughes-Rogers Professor of Mathematics and department chair, said: "This is really great for both the department and the University. The Fields Medal is probably the most prestigious recognition in pure mathematics." Gabai added, "beyond being a great researcher and adviser to graduate students, Manjul is an extraordinary teacher." He is particularly known for his popular freshman seminar, "The Mathematics of Magic Tricks and Games," wherein students explore the mathematical principles behind games and magic tricks.

Bhargava has received numerous awards for his work, including the 2012 Infosys Prize; the 2011 Fermat Prize presented by the Toulouse Mathematics Institute in France; the 2005 SASTRA Ramanujan Prize from the Shanmugha Arts, Science, Technology and Research Academy in India; the AMS Blumenthal Award for the Advancement of Pure Mathematics in 2005; and the Packard Foundation Fellowship in Science and Engineering in 2004. He was elected to the U.S. National Academy of Sciences in 2013. He also was named one of Popular Science magazine's "Brilliant 10" in 2002. As a graduate student, Bhargava studied under renowned mathematician Andrew Wiles, the James S. McDonnell Distinguished University Professor of Mathematics, Emeritus.

Princeton mathematicians have received several of the field's most esteemed awards this year. In March, Professor of Mathematics Yakov Sinai was awarded the Abel Prize by the Norwegian Academy of Science and Letters for his influential 50-year career in mathematics. In June, Peter Sarnak, the Eugene Higgins Professor of Mathematics, received the Wolf Prize in Mathematics, which is awarded by the Israel-based Wolf Foundation and presented by the president of Israel.

"We should be proud of the fact that so many of our faculty won major prizes and recognitions this year," Gabai said.

The IMU today also recognized the first female recipient of a Fields Medal, Maryam Mirzakhani, who was a Princeton mathematics professor from 2004 to 2010 and is now at Stanford University.

The union also presented Princeton alumnus Subhash Khot, a New York University professor of computer science who received his Ph.D. in computer science from Princeton in 2003, with the Rolf Nevanlinna Prize, which honors "outstanding contributions in mathematical aspects of information sciences." In addition, Phillip Griffiths, who received his Ph.D. in mathematics from Princeton in 1962 and served as a professor of mathematics from 1968 to 1972, received the Chern Medal Award, which is presented to those "whose accomplishments warrant the highest level of recognition for outstanding achievements in the field of mathematics."