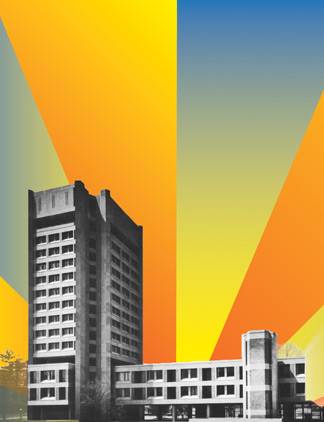 Fine Hall on the Princeton University campus is home to the Department of Mathematics. With a tradition of excellence, the math department is known for its innovative thinkers and teachers of future generations of mathematicians.

Towering about the arches and ivy, 13-story Fine Hall is home to the Department of Mathematics and to some of the deepest thinkers on campus.

"Our goal as a department is to work on the most fundamental problems, to address the most interesting questions, to open new directions of inquiry, and to push the frontiers of mathematics. It is that simple," said David Gabai, the Hughes-Rogers Professor of Mathematics and chair of the department since 2012.

It is a goal that Princeton has met for more than a century. It was here in the late 1930s that Alan Turing — subject of the 2014 film "The Imitation Game" — earned his Ph.D. and worked on ideas that form the foundation of computer science. In the 1990s at Princeton, Andrew Wiles conquered one of math's toughest challenges by proving Fermat's Last Theorem, a problem that had baffled mathematicians for three centuries. It was at Princeton that the late John Nash, his life also made into a film, "A Beautiful Mind," did some of his most influential work in mathematics.

Today's mathematics department carries on this tradition of excellence. Graduate students of the program at Princeton have gone on to become professors at the top universities in the country and abroad. "The combination of freedom to explore what interests you and exposure to some of the most renowned faculty in the field makes Princeton's one of the best programs for training new researchers," said Igor Rodnianski, professor of mathematics and acting chair of the department.

The number of Princeton undergraduates choosing math has tripled in the past 15 years, said Rodnianski. "People are starting to understand that mathematics is one of the foundational sciences, and that getting an undergraduate education in math will be helpful no matter what you do afterwards."

From left: The work of Albert Einstein has inspired generations of physicists and mathematicians; Princeton mathematics professor Maria Chudnovsky is exploring "perfect graphs"; elliptic curves are capturing the attention of Manjul Bhargava, the Brandon Fradd, Class of 1983, Professor of Mathematics. (Photo of Einstein by Hermann Landshoff/Münchner Stadtmuseum, Sammlung Fotografie, Archiv Landshoff; photos of Chudnovsky and Bhargava by Denise Applewhite, Office of Communications)

Mathematics is often described as the science of finding patterns, which appear throughout nature, in everything from ripples of pond water to the orbits of the planets. The patterns found in the numbers we use every day (1, 2, 3 …) have fascinated mathematicians since the time of the ancient Greeks. In the last few centuries, mathematics research has led to discoveries about the underlying structure of nature and fueled the development of today’s technologies.

"A lot of people think that mathematics is a rigid science, that we just sit around applying existing problem-solving tools — like addition, subtraction, multiplication and division — to problems that are given to us," Rodnianski said. "Well, neither are the problems given to us, nor are we given the tools. We have to develop the tools as we go along."

The creative nature of mathematics research makes its pursuit rewarding in its own right, according to many of the Princeton mathematicians interviewed for this article. Often the applications of this research take decades to emerge, but when they do, they are transformative. "Mathematical concepts can have dramatic consequences in other fields," said Elias Stein, the Albert Baldwin Dod Professor of Mathematics, Emeritus, who is active in research in the field of analysis, which has its roots in the development of calculus. For example, the discovery of the structure of DNA in the early 1950s was possible because of previous work on the mathematics of analyzing signals to identify their components.

Sometimes, curiosity-driven mathematics research finds more immediate use. In the 1990s Peter Sarnak, the Eugene Higgins Professor of Mathematics, and two fellow mathematicians, Alexander Lubotzky of the Hebrew University of Jerusalem and Ralph Phillips of Stanford University, introduced Ramanujan graphs, which are arrangements of dots, with pairs of dots joined by edges according to specialized rules of number theory. They showed that for these graphs, the dots were highly interconnected, but with the fewest possible connections. This turned out to be of great interest in computer networking, where engineers could cut costs by using fewer wires between nodes without sacrificing connectivity. Other examples of curiosity-driven investigation leading to practical applications include the research of Professor of Mathematics Assaf Naor on the field of computer science and the research of Charles Fefferman, the Herbert E. Jones, Jr. '43 University Professor of Mathematics, on the study of fluids. 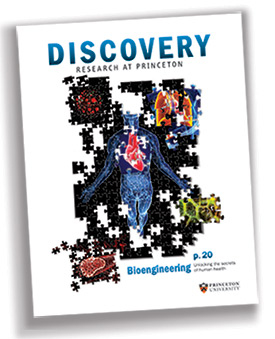 New findings and insights in mathematics can take years to develop, but the effort pays off, said Gabai, who is on sabbatical at the nearby Institute for Advanced Study, a leading center for theoretical research. "A career in mathematics research is about enduring frustrations with tenacity, being willing to be stuck on a problem, having an open mind and trying things others haven't," Gabai said. "The path is not easy, but it is incredibly rewarding in the end."