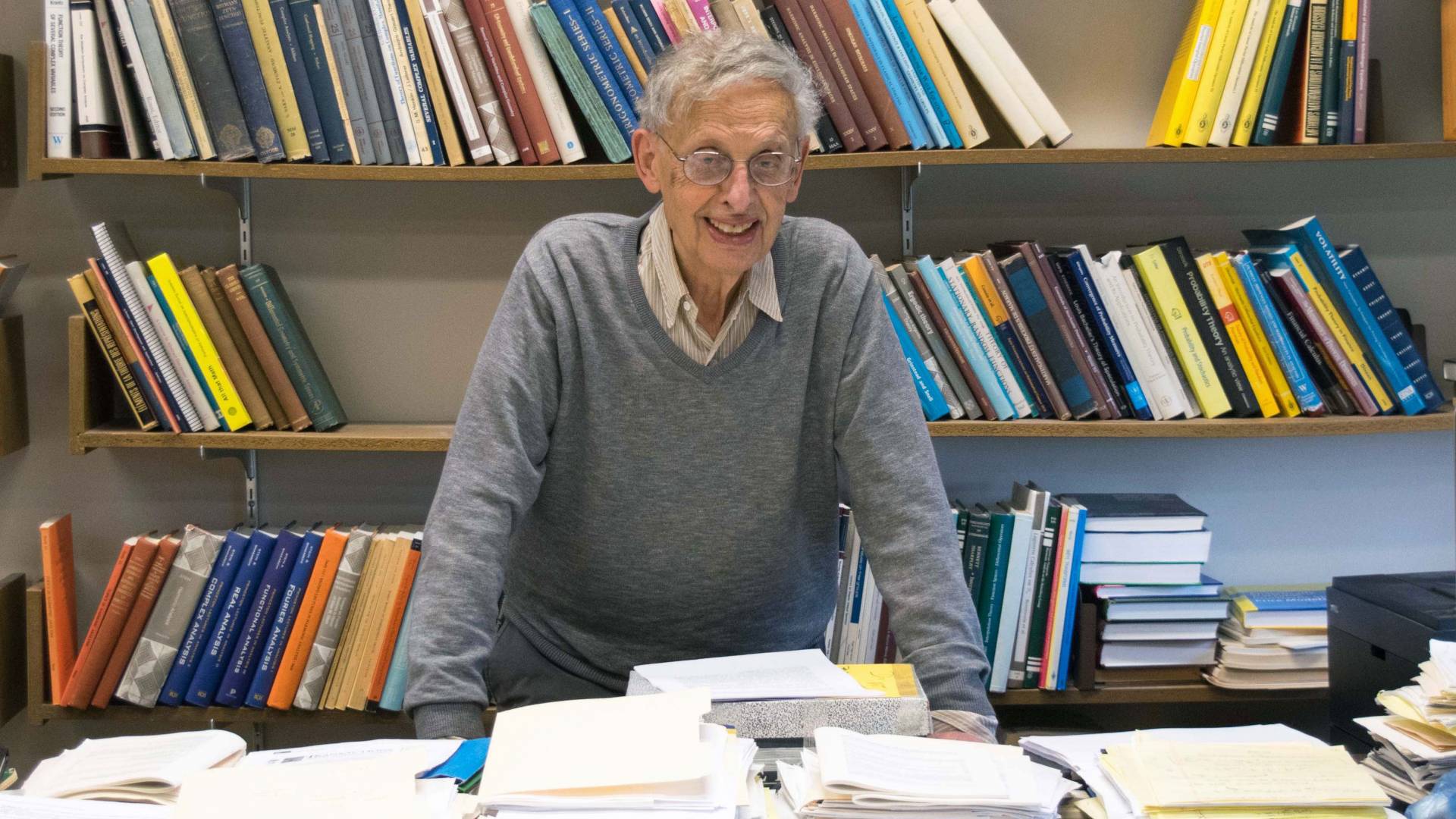 Elias Menachem Stein, a Princeton University mathematician for more than 50 years, died on Dec. 23 from complications related to mantle cell lymphoma. He was 87.

Stein, the Albert Baldwin Dod Professor of Mathematics Emeritus, was a pioneer in the field of harmonic analysis, an area of mathematics that has applications throughout the sciences.

For his contributions to the field, Stein received the 2002 National Medal of Science. Other awards include the Wolf Prize, one of the highest honors in mathematics; the Schock Prize, which is given by the Royal Swedish Academy of Sciences; and a Lifetime Achievement Award from the American Mathematical Society in recognition of Stein’s fundamental contributions to different branches of mathematical analysis.

Stein joined Princeton’s Department of Mathematics in 1963 and twice served as department chair.

“His death is a huge loss to the department, to mathematics and to Princeton,” said Department Chair David Gabai, the Hughes-Rogers Professor of Mathematics.

Charles Fefferman, the Herbert E. Jones, Jr. '43 University Professor of Mathematics, said Stein was “a great mathematician, a great teacher and a great human being. It sounds like hype, but it is true. His discoveries from 50 years ago still play an important role in current research, and he kept on proving new theorems almost to the end of his life.”

Before becoming his colleague in the math department, Fefferman was one of Stein’s Ph.D. students.

“Eli’s mathematical descendants — his Ph.D. students, their PhD students and so on — number over 600,” Fefferman said. “He inspired generations of students and researchers. He will be sorely missed.”

Stein was equally passionate about his research as he was about teaching graduate and undergraduate students.

Stein became an emeritus professor in 2012, though he continued to teach some classes. In his 70s, he helped create a series of advanced undergraduate math courses and co-wrote a four-volume textbook to accompany the courses.

Upon his transfer to emeritus status, colleagues wrote in tribute: “Eli’s combined influence as a researcher, collaborator, teacher and expositor is unmatched. …His lectures are characterized by perfect clarity, concentration on essentials and impeccable taste. In his interaction with students and co-workers he has managed to convey the strong sense of optimism that is essential for mathematical discovery. He has been a major influence on many lives.”

Stein held a life-long view of mathematics as a brilliant balance of imagination and rational investigation, said his daughter, Karen Stein.

He pioneered work in harmonic analysis, a field of mathematics originally developed to understand the flow of heat and the vibrations of a string. He also pioneered applications of harmonic analysis in other fields of mathematics. These advances led, in turn, to deeper understanding of a broad range of subjects including the stock market, gravitational waves and sound recordings.

Born in Belgium in 1931, Stein and his family fled the country after the German invasion during World War II. They eventually immigrated to the United States and settled in New York City, where Stein served as captain of the math team at Stuyvesant High School.

He earned his undergraduate and graduate degrees from the University of Chicago, and held positions there and at the Massachusetts Institute of Technology before coming to Princeton.

Stein was the author of several books, including “Singular Integrals and Differentiability Properties of Functions” and “Harmonic Analysis: Real Variable Methods, Orthogonality, and Oscillatory Integrals.” He also served on the editorial boards of the premiere journal Annals of Mathematics and several of Princeton’s book series.

Stein is survived by Elly, his wife of 59 years; a brother, Daniel; a son, Jeremy, Princeton Class of 1983, the Moise Y. Safra Professor of Economics at Harvard University and a member of the Board of Governors of the U.S. Federal Reserve from 2012-14; a daughter Karen, Princeton Class of 1984, an architecture critic and former member of the jury of the Pritzker Architecture Prize; a daughter-in-law, Anne; and grandchildren Carolyn, Alison and Jason.

A funeral was held Dec. 26. Donations in Stein’s memory can be made to The New York Times Neediest Cases Fund and the International Rescue Committee.

View or share comments on a blog intended to honor Stein's life and legacy.